Many techniques have been proposed for the detection of soluble immune complexes.

Many techniques have been proposed for the detection of soluble immune complexes. In general these techniques are based either on the physical properties (e.g., precipitation with polyethylene glycol (PEG) or precipitation at cold temperatures) or on the biological char-acteristics of the IC. The latter techniques make use of various properties of IC such as their ability to bind C1q or their binding to cells that express CR1 and CR2 (Raji cell assay). Table 23.3 lists those assays that have achieved wider use, some of which will be discussed below. 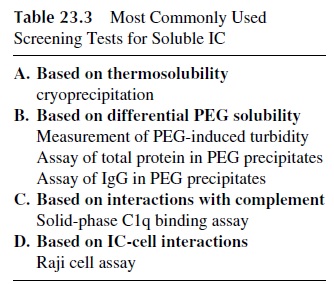 A. Detection of Cryoglobulins

Circulating IC are often formed in antigen excess, with low-affinity antibodies, and remain soluble at room temperature. However, if the serum containing these IC is cooled to 4°C for about 72 hours, the stability of the antigen-antibody reaction increases and eventually there is sufficient cross-linking to result in the formation of large aggregates, which pre-cipitate spontaneously (Fig. 23.4). Because antibodies are the main constituents of these cold precipitates, and because antibodies are globulins, the precipitated proteins are desig-nated as cryoglobulins. Serum separated from blood drawn, clotted, and centrifuged at 37°C is used for detection of cryoglobulins. The proper characterization of a cryoprecipi-tate requires redissolution of the precipitated proteins at 37°C, followed by their immuno-chemical characterization (Fig. 23.5). The immunochemical characterization allows us to classify cryoglobulins classified in two major types:

1.           Monoclonal cryoglobulins, containing immunoglobulin of one single isotype and one single light-chain class. 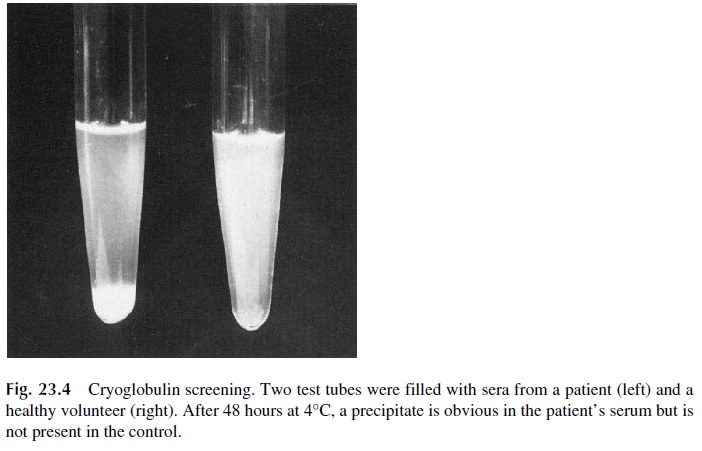 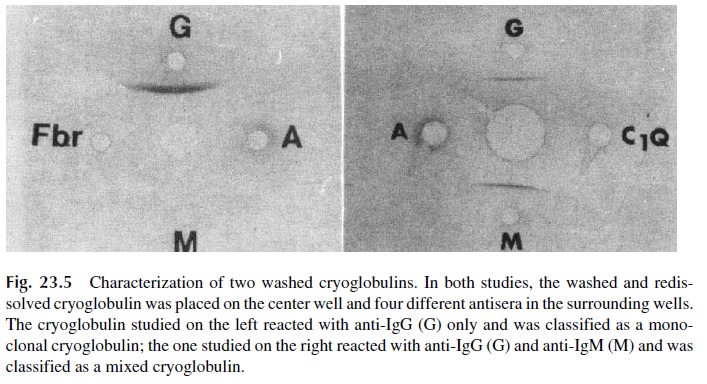 Mixed cryoglobulins, on the contrary, represent cold-precipitable immune com-plexes. One of the immunoglobulins present in the precipitate (usually the monoclonal component) is an antibody that reacts with the other immunoglobulin(s) that constitute the cryoglobulin.

The most frequent type of mixed cryoglobulin is IgM-IgG, in which IgM is a “rheumatoid factor.” It is believed that, at least in some cases, the IgM antibody is di-rected to determinants expressed by IgG antibodies bound to their corresponding antigens (Fig. 23.6). Evidence supporting the involvement of infectious agents in the formation of mixed cryoglobulins has been obtained by identifying antigens and/or antibodies in the cry-oprecipitates, particularly hepatitis viruses or antigens derived from them. 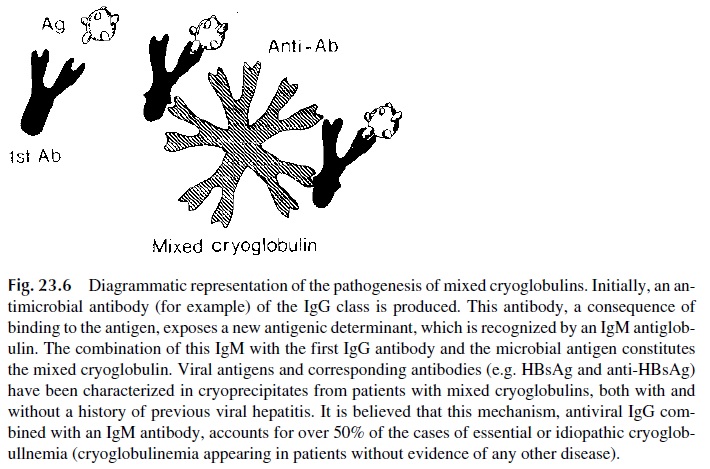 B. Techniques Based on the Precipitation of Soluble Immune Complexes with Polyethylene Glycol

Low concentrations of PEG (3– 4%) cause preferential precipitation of IC relative to monomeric immunoglobulins. For IC screening purposes, a dilution of patient’s serum and PEG are mixed, and the turbidity of the sample is measured after adequate incubation; a di-rect correlation can be established between the degree of turbidity and the concentration of IC in the serum. Other assays involve the incubation of mixtures of PEG and sera until a precipitate is obtained, and then total protein, IgG, or C1q is measured in the precipitate. This technique is also frequently used as the initial step in immune complex isolation pro-tocols.

C. Assays Based on Interactions with Complement

One of the most widely used techniques for general screening of IC is based on the bind-ing of C1q. The original method employed purified 125l-labeled C1q as a tracer for soluble IC precipitated with either a second antibody (anti-human IgG) or polyethylene glycol. A solid-phase technique was later introduced, which proved to be equally simple but considerably more precise and reproducible. 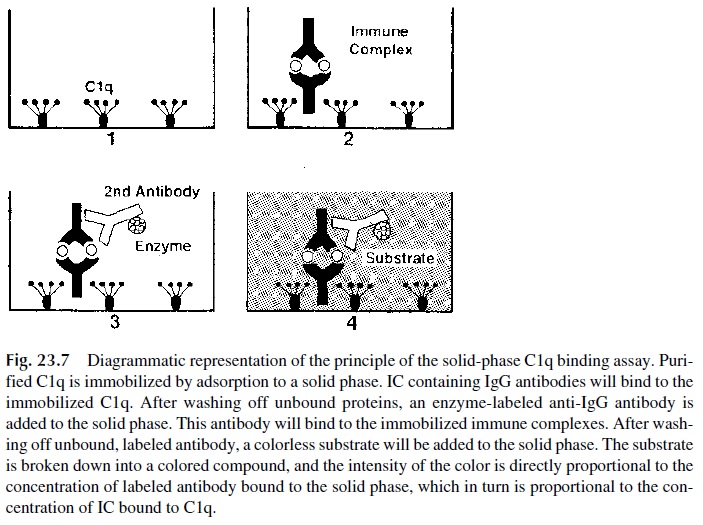 The detection of IC through their antigen or antibody moieties is conceptually very attrac-tive. Indeed, the probability of obtaining false-positive results is considerably reduced when specific tests are used. The main difficulties with this approach are the wide variety of antigen-antibody systems involved and the lack of knowledge concerning the precise antigen-antibody systems involved in given patient. However, in some cases it has been possible to detect specific antigens and/or antibodies in cryoprecipitates, PEG precipitates, or other IC-enriched fractions obtained from patient sera, and such studies are very valu-able in establishing the etiology of specific types of IC disease.