Reason for loss of throughput

Ø Instruction completion- choosing which instructions to commit may be challenging

Ensuring that cache and TLP conflicts generated by SMT do not degrade performance. There are mainly two observations

Ø Potential performance overhead due to multithreading is small

A SMT processor works well if Number of compute intensive threads does not exceed the number of threads supported in SMT. Threads have highly different charecteristics For eg; 1 thread doing mostly integer operations and another doing mostly floating point operations

The problem here is the operating system does not see the difference between the SMT and real processors !!!

Faults that persist for a “short” duration. Cause is cosmic rays (e.g., neutrons).The effect is knock off electrons, discharge capacitor.The Solution is no practical absorbent for cosmic rays.1 fault per 1000 computers per year (estimated fault rate) 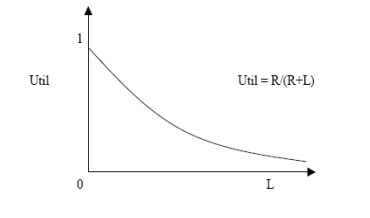 R = the run length to a long latency event

L = the amount of latency

CRT borrows the detection scheme from the SMT-based simultaneously and Redundantly Threaded (SRT) processors and applies the scheme to CMPs.

Compare the results of the two. 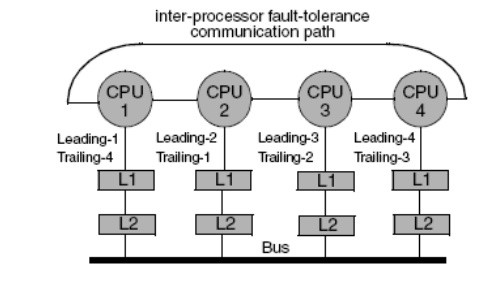 Detection is based on replication but to which extent?.Itreplicates register values (in register file in each core) but not memory values. The CRT’s leading thread commits stores only

after checking, so that memory is guaranteed to be correct.CRT compares only stores and uncached loads, but not register values, of the two threads.

An incorrect value caused by a fault propagates through computations and is eventually consumed by a store, checking only stores suffices for detection; other instructions commit without checking.

Unlike CRT, CRTR must not allow any trailing instruction to commit before it is checked for faults, so that the register state of the trailing thread may be used for recovery. However, the leading thread in CRTR may commit register state before checking, as in CRT.

Challenges with this approach

Since instructions are being grabbed from many different contexts, instruction locality is degraded and the I-cache miss rate rises.

Ø Register file access time increases due to the fact that the regfile had to significantly increase in size to accommodate many separate contexts.

Ø In fact, the HEP and Tera use SRAM to implement the regfile, which means longer access times.

Ø Single  thread  performance  significantly  degraded  since  the  context  is

forced to switch to a new thread even if none are available.

Ø Very high bandwidth network, which is fast and wide