Analyze performance, what should the results be against what they actually are

Problem must be precisely identified and described

Problems are caused by some change from a distinctive feature

Objectives must first be established

Objectives must be classified and placed in order of importance

Alternative actions must be developed

The alternative must be evaluated against all the objectives

The tentative decision is evaluated for more possible consequences

The decisive actions are taken, and additional actions are taken to prevent any adverse consequences from becoming problems and starting both systems (problem analysis and decision making) all over again

Some of the decision making techniques people use in everyday life include:

Listing the advantages and disadvantages of each option, popularized by Plato and Benjamin Franklin

Acquiesce to a person in authority or an "expert", just following orders

flipism: Flipping a coin, cutting a deck of playing cards, and other random or coincidence methods 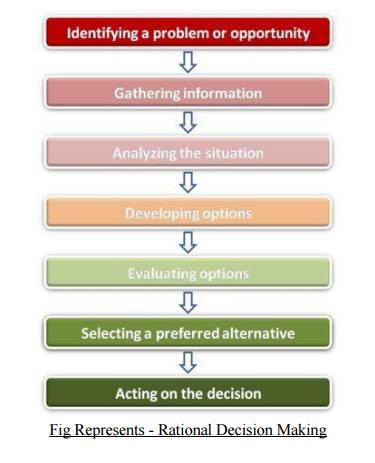