The “DSM-IV-TR Classification of Mental Disorders’’ refers to the comprehensive listing of the official diagnostic codes, catego-ries, subtypes and specifiers (see below). It is divided into vari-ous “diagnostic classes’’ which group disorders together based on common presenting symptoms (e.g., mood disorders, anxiety disorders), typical age-at-onset (e.g., disorders usually first diag-nosed in infancy, childhood and adolescence), and etiology (e.g., substance-related disorders, mental disorders due to a general medical condition). 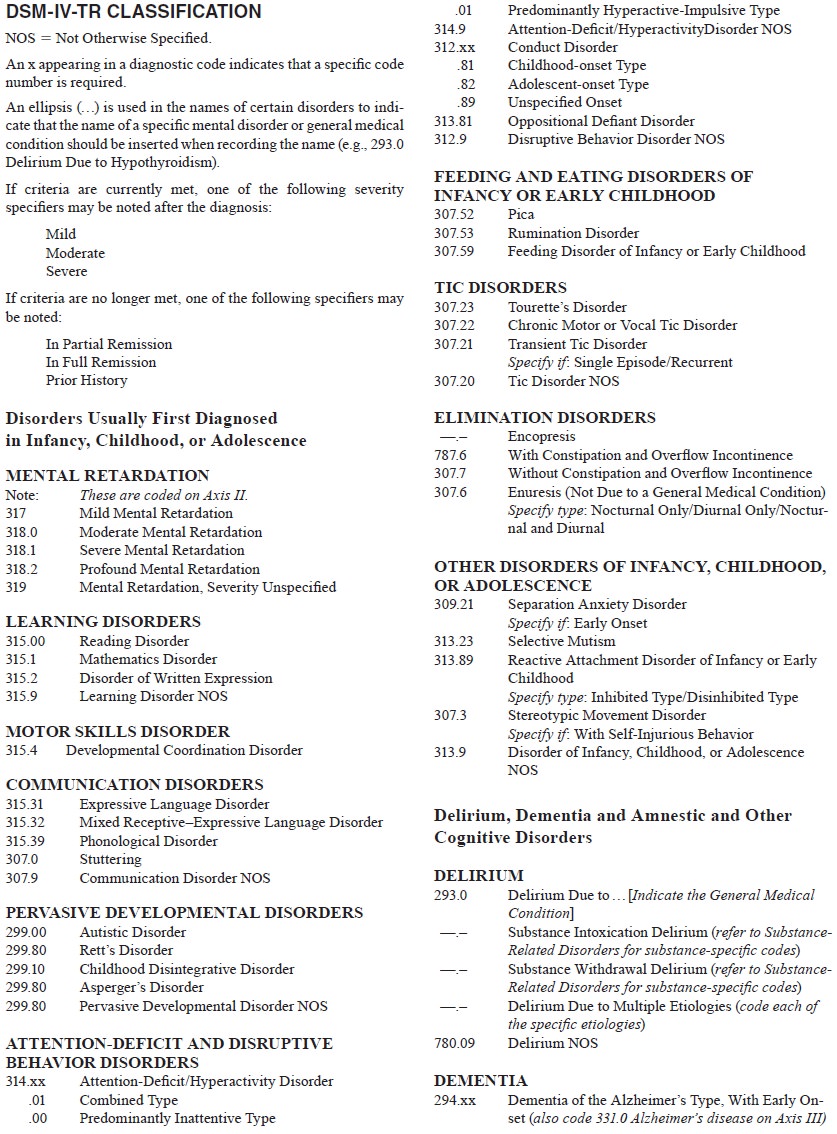 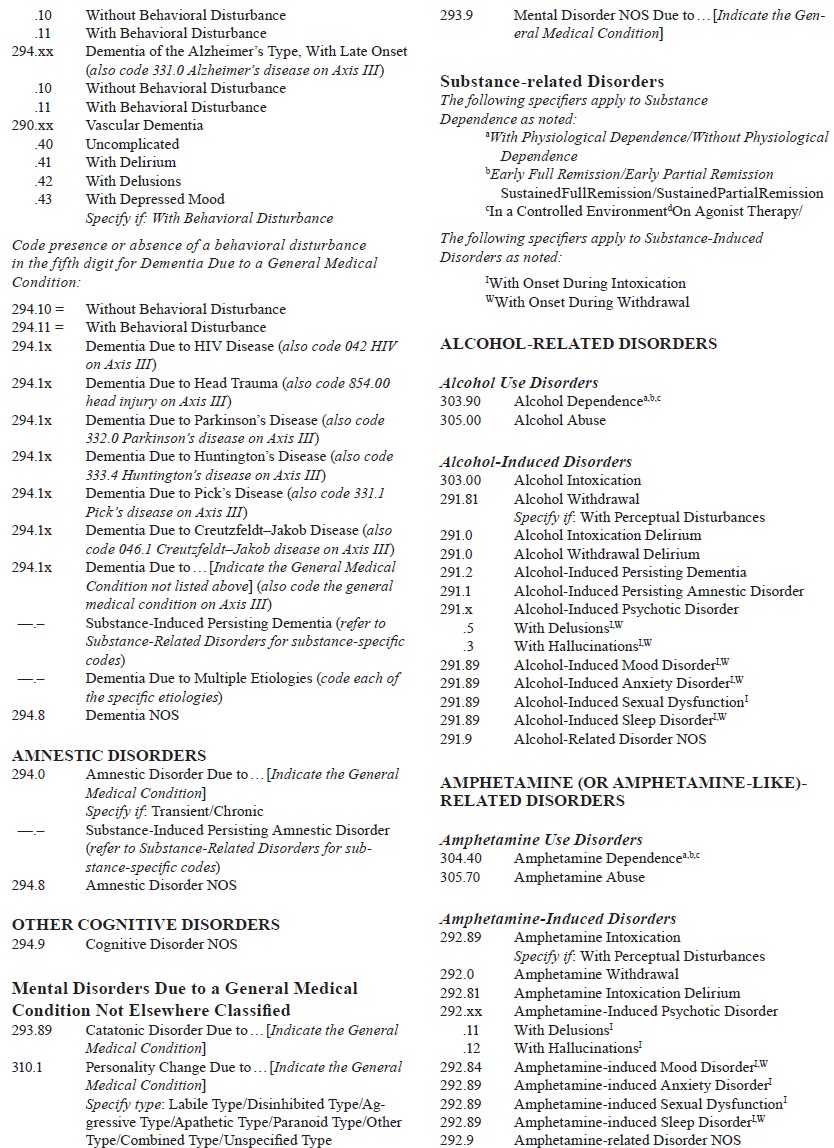 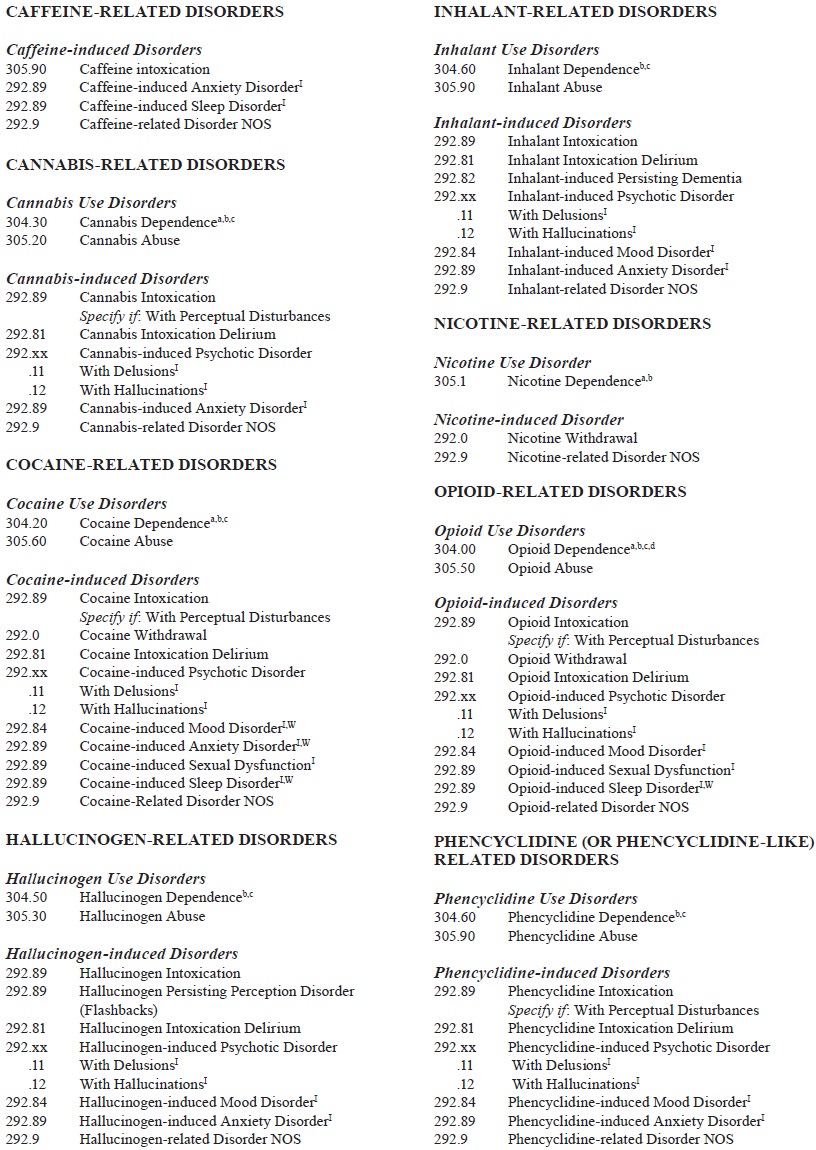 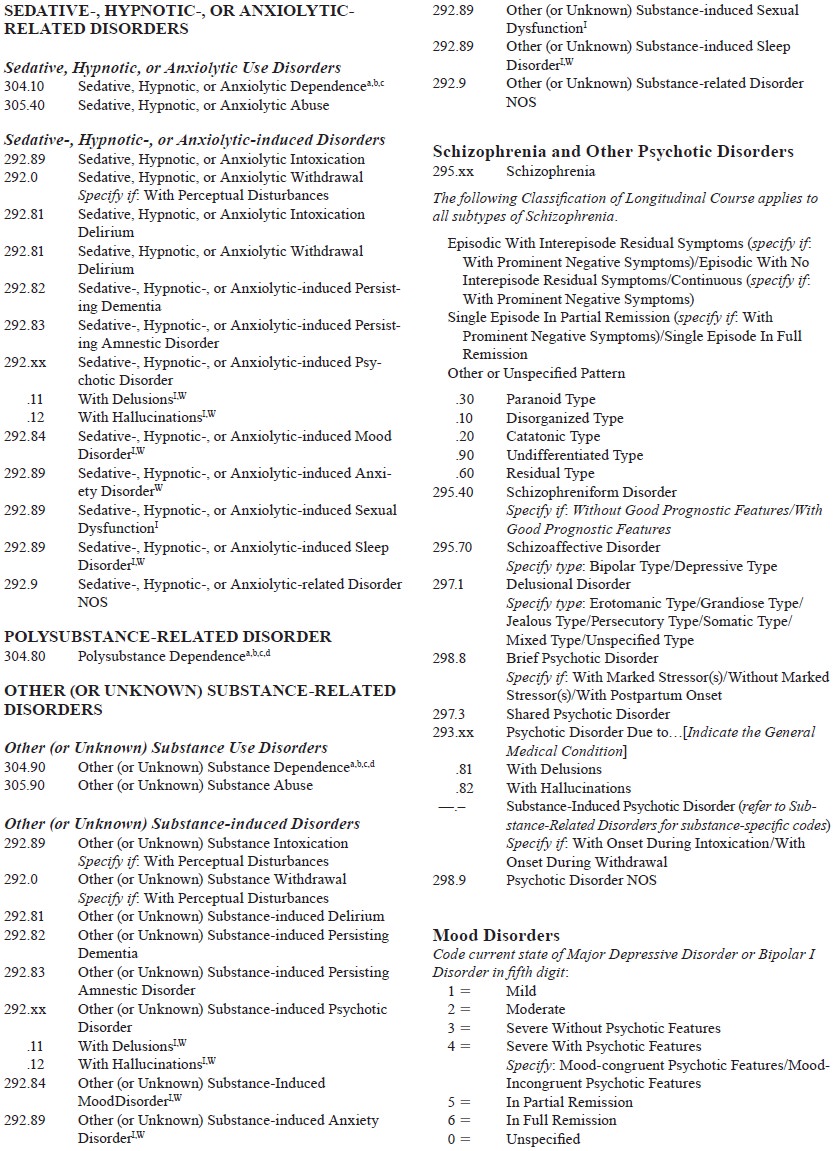 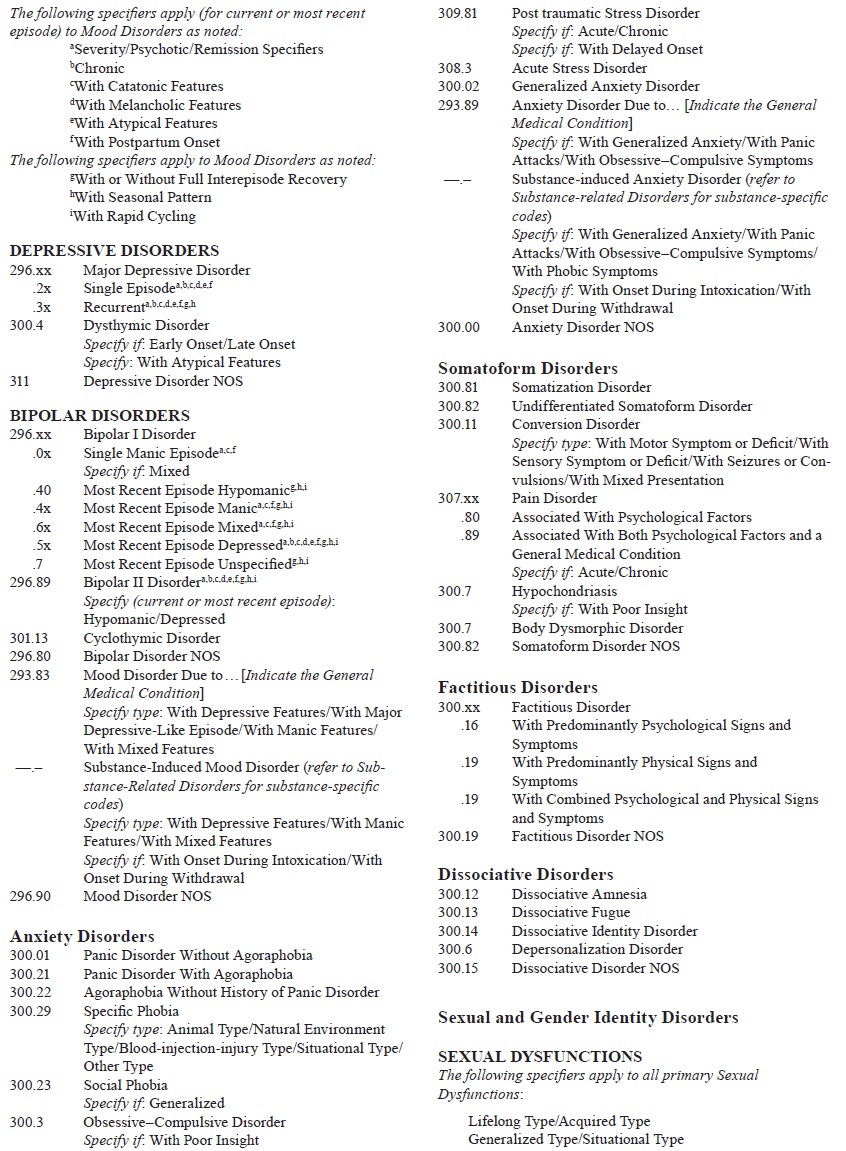 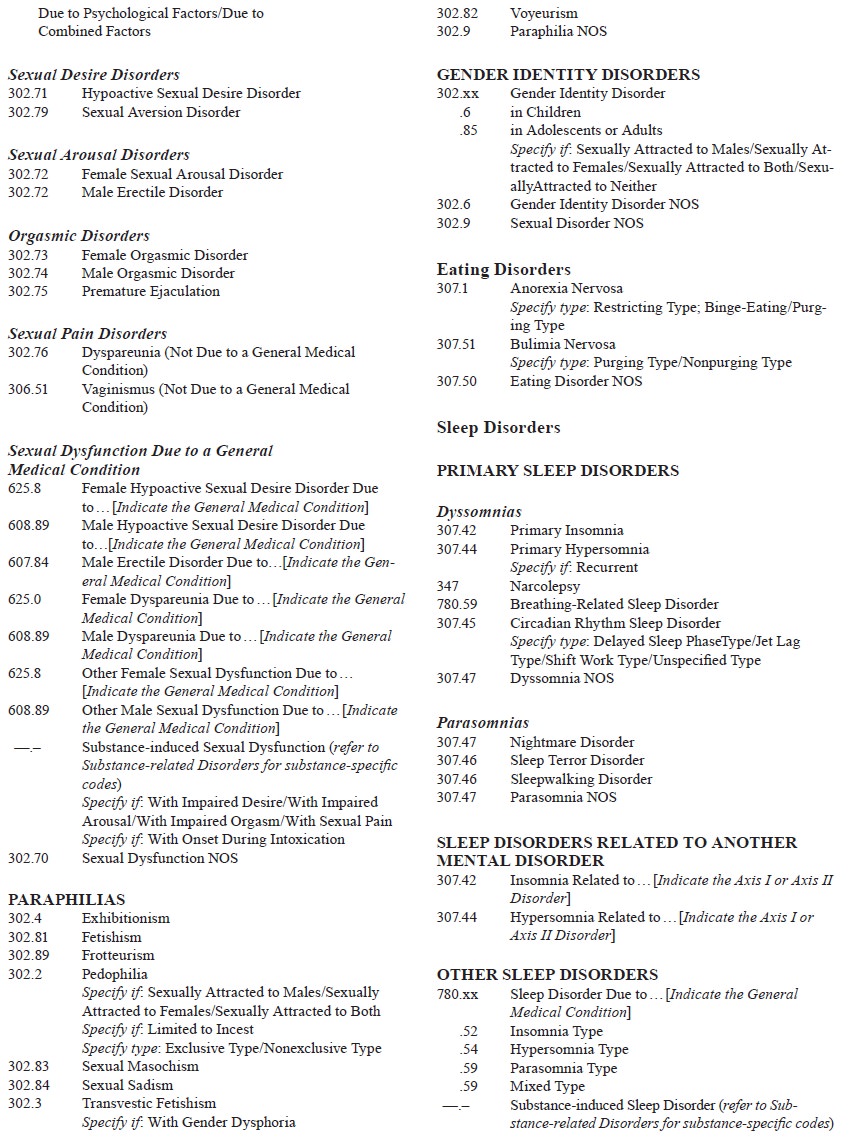 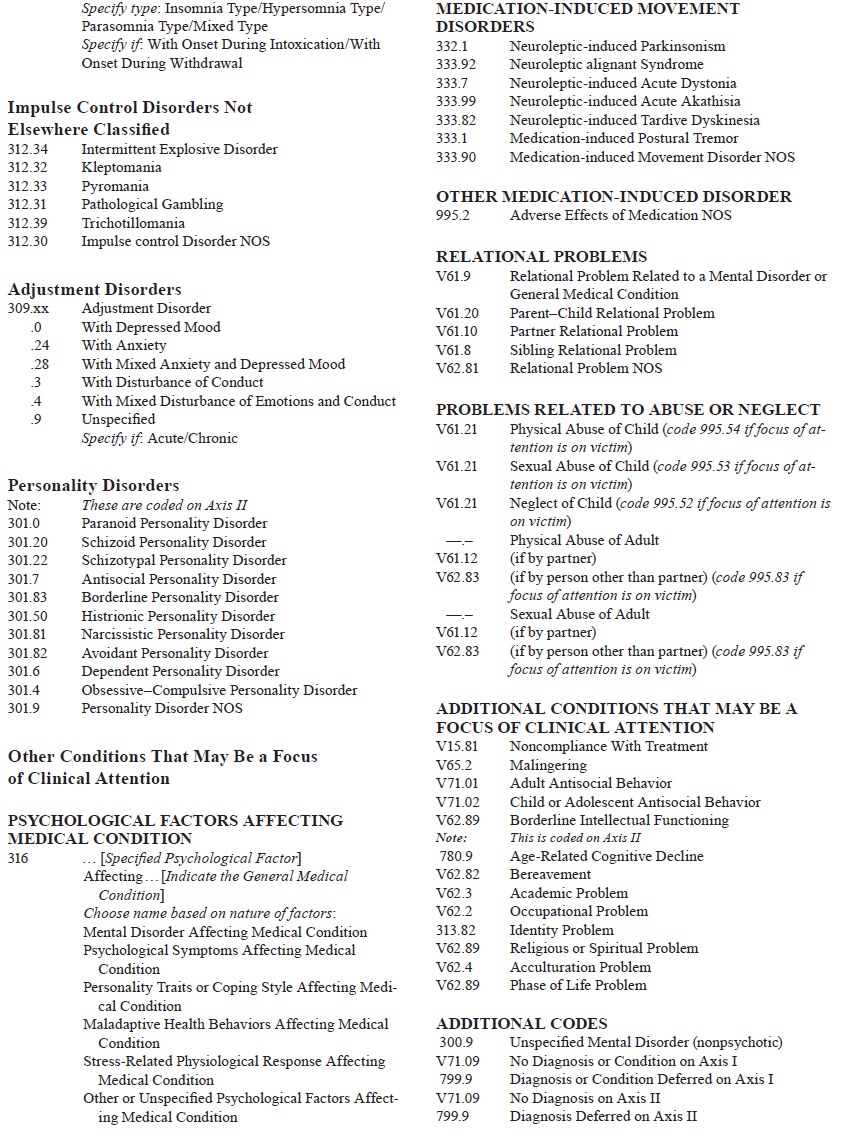 The diagnostic codes listed in the DSM-IV are derived from the International Classifi cation of Diseases, Ninth Revision, Clinical Modification (ICD-9-CM), the official coding system for reporting morbidity and mortality in the USA. That is the reason why the codes go from 290.00 to 319.00; they are actually de-rived from the mental disorders section of a much larger coding system for all medical disorders that extends from 001 to 999. Clinicians working in the USA are required to use ICD-9-CM in order to receive reimbursement from both government agencies (e.g., Medicare and Medicaid) and private insurers.

The classification begins with disorders usually first diagnosed in infancy, childhood, or adolescence. The provision for a separate section for so-called childhood disorders is only for convenience. Although most individuals with these disorders present for clinical attention during childhood or adolescence, it is not uncommon for some of these conditions to be diagnosed for the first time in adulthood (e.g., attention-deficit/hyperac-tivity disorder). Moreover, many disorders included in other sections of the DSM-IV have an onset during childhood (e.g., major depressive disorder). Thus, a clinician evaluating a child or adolescent should not only focus on those disorders listed in this section but also consider disorders from throughout the DSM-IV. Similarly, when evaluating an adult, the clinician should also consider the disorders in this section since many of them persist into adulthood (e.g., stuttering, learning disorders, tic disorders).

The first set of disorders included in this diagnostic class (mental retardation, learning and motor skills disorders, and communication disorders). While they are not, strictly speak-ing, regarded as mental disorders, they are included in the DSM-IV-TR to facilitate differential diagnosis and to increase recognition of these conditions among mental health profes-sionals. Autism and other pervasive developmental disorders are characterized by gross qualitative impairment in social re-latedness, in language, and in repertoire of interests and ac-tivities. Disorders covered include autistic disorder, Asperger’s disorder, Rett’s disorder and childhood disintegrative disorder. Attention-deficit/hyperactivity disorder and other disruptive behavior disorders are grouped together because they are all characterized (at least in their childhood presentations) by dis-ruptive behavior.

In the previous DSM-III-R, delirium, dementia, amnestic dis-order and other cognitive disorders were included in a section called “organic mental disorders’’, which contained disorders that were due to either a general medical condition or substance use. In DSM-IV-TR, the term organic was eliminated because of the implication that disorders not included in that section (e.g., schizophrenia, bipolar disorder) did not have an organic compo-nent (Spitzer et al., 1992). In fact, virtually all mental disorders have both psychological and biological components, and to des-ignate some disorders as organic and the remaining disorders as nonorganic reflected a reductionistic mind–body dualism that is at odds with our understanding of the multifactorial nature of the etiological underpinnings of disorders.

DSM-IV-TR replaced each unitary organic mental disor-der (e.g., organic mood disorder) with its two component parts: mood disorder due to a general medical condition and sub-stance-induced mood disorder. Because of their central roles in the differential diagnosis of cognitive impairment, delirium, dementia and amnestic disorder are contained within the same diagnostic class in DSM-IV-TR.

Whereas both delirium and dementia are characterized by multiple cognitive impairments, delirium is distinguished by the presence of clouding of consciousness, which is manifested by an inability appropriately to maintain or shift attention. DSM-IV-TR includes three types of delirium: delirium due to a general medical condition, substance-induced delirium and delirium due to multiple etiologies.

Dementia is characterized by clinically significant cog-nitive impairment in memory that is accompanied by impair-ment in one or more other areas of cognitive functioning (e.g., language, executive functioning). DSM-IV-TR includes several types of dementia based on etiology, including dementia of the Alzheimer’s type, vascular dementia, a variety of dementia due to general medical and neurological conditions (e.g., human immunodeficiency virus infection, Parkinson’s disease), sub-stance-induced persisting dementia and dementia due to mul-tiple etiologies.

Mental Disorders Due to a General Medical Condition Not Elsewhere Classified

The term substance in DSM-IV has a broader meaning than merely a drug of abuse. It also includes medication side effects and the consequences of toxin exposure. Two types of substance-related disorders are included in DSM-IV-TR: substance use dis-orders (dependence and abuse), which describe the maladaptive nature of the pattern of substance use; and substance-induced disorders, which cover psychopathological processes caused by the direct effects of substances on the central nervous system. Criteria sets for substance dependence, substance abuse, sub-stance intoxication and substance withdrawal that apply across all drug classes are included before the substance-specific sec-tions of DSM-IV.

Schizophrenia and Other Psychotic Disorders

It should be noted that the definition of the term psychosis has been used in different ways historically and is not even used consistently across the various categories in the DSM-IV-TR. The most restrictive definition of psychosis (used in substance-induced psychotic disorder) requires a break in reality testing such that the person has delusions or hallucinations with no in-sight into the fact that the delusions or hallucinations are caused by taking drugs.

This diagnostic class includes disorders in which the predomi-nant disturbance is in the individual’s mood. Although the term mood is broadly defined to include depression, euphoria, anger and anxiety, the DSM-IV-TR generally restricts mood distur-bances to depressed, elevated, or irritable mood.

The common element joining these disparate categories together is the fact that the anxiety is a prominent part of their clinical presentation. This grouping has been criticized because of evi-dence suggesting that at least some of the disorders are likely to be etiologically distinct from the others. Most particularly, obses-sive–compulsive disorder and post traumatic stress disorder seem to share little in common with the other anxiety disorders. In fact, separate diagnostic classes for stress-related disorders (that would also include adjustment disorders and perhaps dissocia-tive disorders) and for obsessive–compulsive spectrum disorders (which might also include trichotillomania, tic disorders, hypo-chondriasis, body dysmorphic disorder and other disorders char-acterized by compulsive behavior) have been proposed.

This diagnostic class includes disorders in which the defining feature is a physical complaint or bodily concern that is not better accounted for by a general medical condition or another mental disorder. These disorders can be divided into three groups based on the focus of the individual’s concerns: 1) focus on the physical symptoms themselves (somatization disorder, undifferentiated somatoform disorder, pain disorder and conversion disorder); 2) focus on the belief that one has a serious physical illness (hypo-chondriasis); and 3) focus on the belief that one has a defect in physical appearance (body dysmorphic disorder).

This diagnostic class contains only one disorder: factitious disorder, which describes presentations in which the individual intentionally produces or feigns physical or psychological symp-toms in order to fulfill a psychological need to assume the sick role. Factitious disorder should always be distinguished from malingering, in which the individual similarly pretends to have physical or psychological symptoms. The difference is that in malingering, the person’s motivation is to achieve some external gain (e.g., disability benefits, lessening of criminal responsibility, shelter for the night). For this reason, unlike factitious disorder, malingering is not considered a mental disorder.

The common element to this group of disorders is the symptom of dissociation, which is defined as a disruption in the usually integrated functions of consciousness, memory, identity and per-ception. Four specific disorders are included: dissociative amne-sia, dissociative fugue, dissociative identity disorder and deper-sonalization disorder.

This diagnostic class contains three relatively disparate types of disorders, linked together only by virtue of their involvement in human sexuality. Sexual dysfunctions refer to disturbances in sexual desire or functioning, paraphilias refer to unusual sexual preferences that interfere with functioning (or in the case of preferences that involve harm to others like pedophilia, merely acting on those preferences), and gender identity disorder refers to a serious conflict between one’s internal identity of maleness and femaleness (gender identity) and one’s anatomical sexual characteristics.

Although the name of this diagnostic class focuses on the fact that the disorders in this section are characterized by abnormal eating behavior (refusal to maintain adequate body weight in the case of anorexia nervosa and discrete episodes of uncontrolled eating of excessively large amounts of food in the case of bulimia nervosa), of near equal importance is the individual’s pathological overem-phasis on body image. A third category, which is being actively researched but has not been officially added to the DSM-IV-TR, is binge-eating disorder (included in the appendix of Criteria Sets and Axes Provided for Further Study). Like bulimia nervosa, in-dividuals with binge-eating disorder have frequent episodes of binge-eating. However, unlike bulimia nervosa, these individu-als do not do anything significant to counteract the effects of their binge-eating (i.e., they do not purge, use laxatives or diet pills, or excessively exercise).

Sleep disorders are grouped into four sections on the basis of presumed etiology (primary, related to another mental disor-der, due to a general medical condition, and substance-induced). Two types of primary sleep disorders are included in DSM-IV-TR: dyssomnias (problems in regulation of amount and quality of sleep) and parasomnias (events that occur during sleep). The dyssomnias include primary insomnia, primary hypersomnia, circadian rhythm sleep disorder, narcolepsy and breathing-re-lated sleep disorder, whereas the parasomnias include nightmare disorder, sleep terror disorder and sleepwalking disorder.

As is suggested by the title of this diagnostic grouping, no one diagnostic class in DSM-IV comprehensively includes all of the impulse control disorders. A number of disorders characterized by impulse control problems are classified elsewhere (e.g., con-duct disorder, attention-deficit/hyperactivity disorder, opposi-tional-defiant disorder, delirium, dementia, substance-related disorders, schizophrenia and other psychotic disorders, mood disorders, antisocial and borderline personality disorders). What ties together the disorders in this class is that they present with clinically significant impulsive behavior and that they are not better accounted for by one of the mental disorders included in other parts of DSM-IV-TR. Five such disorders are included here: intermittent explosive disorder, pathological gambling, pyroma-nia, kleptomania and trichotillomania.

All DSM-IV categories (except NOS categories) take priority over adjustment disorder. This category is intended to apply to maladaptive reactions to psychosocial stressors that do not meet the criteria for any specific DSM-IV-TR disorder.

Other Conditions That May Be a Focus of Clinical Attention

This section of DSM-IV is for problems that are not mental disor-ders but that may be a focus of attention for treatment by a mental health professional. Psychological factors affecting medical con-dition is intended to allow the psychiatrist to note the presence of psychological factors (e.g., Axis I or II disorder) that adversely affect the course of a general medical condition, including fac-tors that interfere with treatment and factors that constitute health risks to the individual. Six specific medication-induced movement disorders are also included because of their impor-tance in treatment and differential diagnosis; five are related to neuroleptic administration and one (medication-induced postural tremor) is most often associated with the use of lithium carbon-ate. Although these are best considered medical conditions, by DSM-IV-TR convention they are coded on Axis I.