A new group of biological response modifiers (BRMs) has emerged from efforts to manipulate the immune response using soluble receptors and receptor antagonists to block undesirable effects of pro-inflammatory cytokines.

sTNFRs exist in two forms, 55 kDa (Type B, sTNFRI) and 75 kDa (Type A, sTN-FRII), and act primarily as inhibitors of TNF by preventing TNF from binding to the mem-brane-bound TNFRs (Fig. 24.4). The same effect can be obtained, at least theoretically, with both monoclonal antibodies against TNF. Therapeutically, both monoclonal antibod-ies against TNF and recombinant sTNFRs have been utilized in clinical trials. To increase the biological activity and half-life of sTNFRII, a recombinant protein was developed by combining the sTNFRII with the Fc portion of human IgG1 to form TNFR:Fc (etanercept). In several clinical trials etanercept has been shown to cause significant clinical improve-ment in patients with rheumatoid arthritis not observed with placebo-treated controls. 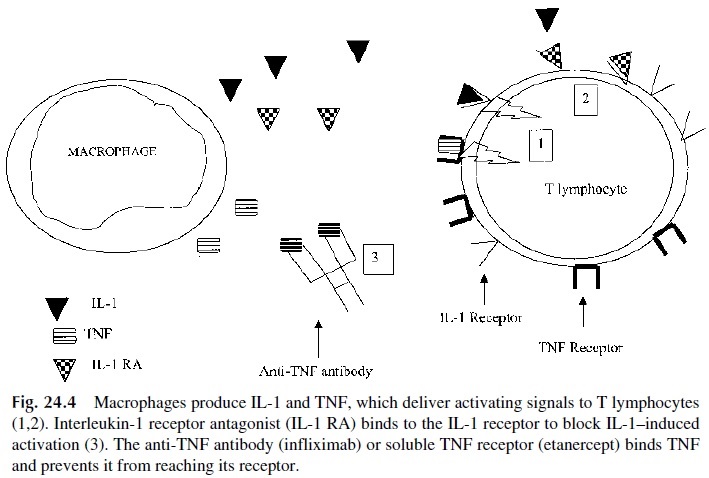 Infliximab, an IgG1 murine-human chimeric monoclonal TNF antibody, binds to and neutralizes TNF (Fig. 24.4). Administration of infliximab in conjunction with methotrex-ate reduces the signs and symptoms of rheumatoid arthritis to a greater extent than methro-texate alone.

High levels of expression of TNF have been observed in the mucosal and lamina pro-pria cells in patients with active Crohn’s disease. In patients with moderate to severe Crohn’s disease not responding to conventional therapy, infliximab reduces Crohn’s dis-ease activity index scores and reduces the number of draining enterocutaneous fistulas. A limitation to infliximab is the fact that after prolonged administration patients develop an-tibodies against the murine portion of infliximab.

A delicate balance between IL-1 and IL-1RA exists in rheumatoid arthritis. An excess of IL-1 leads to disease progression. It is estimated that only 5% of IL-1 receptors need to be bound by IL-1 to stimulate the cell. Therefore, an excess of IL-1RA is required to block IL-1 and modify the disease process.

Recombinant human IL-1 receptor antagonist (IL-1RA) is actively being investi-gated in rheumatoid arthritis as a modulator of IL-1. When it binds to the IL-1 receptor, IL-1RA does not stimulate the receptor, but blocks IL-1 from stimulating the receptor (Fig. 24.4). Considering the positive results obtained with separate administration of TNF and IL-1 antagonists, one can anticipate trials combining modulators of IL-1 and TNF in the treatment of refractory rheumatoid arthritis.