Real cost refers to the payment made to compensate the efforts and sacrifices of all factor owners for their services in production.

Production cost expressed in money terms is called as money cost. In other words, it is the total money expenses incurred by a firm in producing a commodity. Money cost includes the expenditures such as cost of raw materials, payment of wages and salaries, payment of rent, interest on capital, expenses on fuel and power, expenses on transportation and other types of production related costs. These costs are considered as out of pocket expenses. Money costs are also called as Prime Cost or Direct Cost or Nominal Cost or Accounting Cost or Explicit Cost or Out of Pocket Cost, suiting to context.

Payment made to others for the purchase of factors of production is known as Explicit Costs. It refers to the actual expenditures of the firm to purchase or hire the inputs the firm needs. Explicit cost includes, wages, ii) payment for raw material, iii) rent for the building, iv) interest for capital invested, v) expenditure on transport and advertisement vi) other expenses like license fee, depreciation and insurance charges, etc. It is also called Accounting Cost or Out of Pocket Cost or Money Cost.

Payment made to the use of resources that the firm already owns, is known as Implicit Cost. In simple terms, Implicit Cost refers to the imputed cost of a firm’s self-owned and self-employed resources. A firm or producer may use his own land, building, machinery, car and other factors in the process of production. These costs are not recorded under normal accounting practices as no cash payment takes place. However, the value of the own services are imputed and considered for preparing the profit and loss accounts. Implicit Cost is also called as Imputed Cost or Book Cost.

It refers to all payments made to the resources owned and purchased or hired by the firm in order to ensure their regular supply to the process of production. It is the summation of explicit and implicit costs. Economic Cost is relevant to calculate the normal profit and thereby the economic profit of a firm.

It refers to the total cost borne by the society due to the production of a commodity. Alfred Marshall defined the term social cost to represent the efforts and sacrifices undergone by the various members of the society in producing a commodity. Social

Cost is the cost that is not borne by the firm, but incurred by others in the society. For example, large business firms cause air pollution, water pollution and other damages in a particular area which involve cost to the society. These costs are treated as social cost. It is also called as External Cost.

A cost incurred in the past and cannot be recovered in future is called as Sunk Cost. This is historical but irrelevant for future business decisions. It is called as sunk because, they are unalterable, unrecoverable, and if once invested it should be treated as drowned or disappeared. For example, if a firm purchases a specialized equipment designed for a special plant, the expenditure on this equipment is a sunk cost, because it has no alternative use and its opportunity Cost is zero. Sunk cost is also called as ‘Retrospective Cost’.

It refers to all expenses that are directly associated with business activities but not with asset creation. It does not include the purchase of raw material as it is part of current assets. It includes payments like wages to workers, transportation charges, fee for power and administration. Floating cost is necessary to run the day-to-day business of a firm.

All costs that vary with output, together with the cost of administration are known as Prime Cost. In short, Prime cost = Variable costs + Costs of Administration.

Fixed Cost does not change with the change in the quantity of output. In other words, expenses on fixed factors remain unchanged irrespective of the level of output, whether the output is increased or decreased or even it becomes zero. For example, rent of the factory, watchman’s wages, permanent worker’s salary, payments for minimum equipments and machines insurance premium, deposit for power, license fee, etc fixed cost is also called as ‘Supplementary Cost’ or ‘Overhead Cost’. 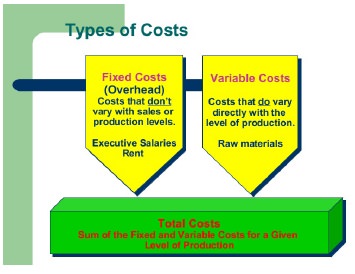 These costs vary with the level of output. Examples of variable costs are: wages of temporary workers, cost of raw materials, fuel cost, electricity charges, etc.