1 Effects of a Method Invocation

We now consider method invocations. We first explain how points-to analysis can be used to compute a precise call graph, which is useful in computing precise points-to results. We then formalize on-the-fly call-graph discovery and show how Datalog can be used to describe the analysis succinctly.

1. Effects of a Method Invocation

The effects of a method call such as x = y . n ( z ) in Java on the points-to rela-tions can be computed as follows:

1. Determine the type of the receiver object, which is the object that y points to. Suppose its type is t. Let m be the method named n in the narrowest superclass of t that has a method named n. Note that, in general, which method is invoked can only be determined dynamically.

3. The returned object of m is assigned to the left-hand-side variable of the assignment statement.

In context-insensitive analysis, parameters and returned values are modeled by copy statements. The interesting question that remains is how to determine the type of the receiver object. We can conservatively determine the type ac-cording to the declaration of the variable; for example, if the declared variable has type then only methods named n in subtypes of t can be invoked. Unfortunately, if the declared variable has type Object, then all methods with name n are all potential targets. In real-life programs that use object hierarchies ex-tensively and include many large libraries, such an approach can result in many spurious call targets, making the analysis both slow and imprecise. 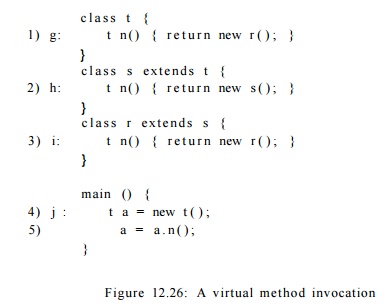 To formulate the Datalog rules for context-insensitive interprocedural analysis, we introduce three EDB predicates, each of which is obtainable easily from the source code:

Each edge of the call graph is represented by an IDB predicate invokes. As we discover more call-graph edges, more points-to relations are created as the parameters are passed in and returned values are passed out. This effect is summarized by the rules shown in Figure 12.27.

The first rule computes the call target of the call site. That is, "5 : V.N (...)" says that there is a call site labeled S that invokes method named N on the receiver object pointed to by V. The subgoals say that if V can point to heap object H, which is allocated as type T, and M is the method used when N is invoked on objects of type T, then call site S may invoke method M.

The second rule says that if site S can call method M, then each formal parameter of M can point to whatever the corresponding actual parameter of the call can point to. The rule for handling returned values is left as an exercise.

Combining these two rules with those explained in Section  12.4 create a context-insensitive points-to analysis that uses a call graph that is computed on the fly. This analysis has the side effect of creating a call graph using a 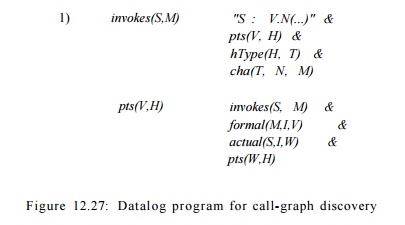 context-insensitive and flow-insensitive points-to analysis. This call graph is significantly more accurate than one computed based only on type declarations and syntactic analysis.

Languages like Java allow dynamic loading of classes. It is impossible to an-alyze all the possible code executed by a program, and hence impossible to provide any conservative approximation of call graphs or pointer aliases stat-ically. Static analysis can only provide an approximation based on the code analyzed. Remember that all the analyses described here can be applied at the Java bytecode level, and thus it is not necessary to examine the source code. This option is especially significant because Java programs tend to use many libraries.

Even if we assume that all the code to be executed is analyzed, there is one more complication that makes conservative analysis impossible: reflection. Reflection allows a program to determine dynamically the types of objects to be created, the names of methods invoked, as well as the names of the fields accessed. The type, method, and field names can be computed or derived from user input, so in general the only possible approximation is to assume the universe.

The f orName method in the Class library takes a string containing the class name and returns the class. The method newlnstance returns an instance of that class. Instead of leaving the object o with type Object, this object is cast to a superclass T of all the expected classes.

Similarly, we can exploit the typecast statement, line (4) in Example 12.25, to approximate the type of dynamically created objects. Assuming that the typecast exception handler has not been redefined, the object must belong to a subclass of the class T.

a) Construct the EDB relations actual, formal, and cha.

b) Make all possible inferences of pts and hpts facts.