The phrases substance abuse and drug abuse are of-ten applied to the use of an illegal or illicit chemical substance (e.g., LSD, heroin).

The phrases substance abuse and drug abuse are of-ten applied to the use of an illegal or illicit chemical substance (e.g., LSD, heroin). However, these terms may be applied when a legally obtainable medication is used excessively and for unintended purposes or is diverted to someone elseâ€™s use. Also, some legal sub-stances (e.g., nicotine, alcohol) are used to the detri-ment of the individual. Inappropriate use, or abuse, is the excessive self-administration of any substance for nonmedical purposes. An additional aspect of drug abuse is the production of hazardous or harmful ef-fects to the individual and/or to society. The etiology of substance abuse is a complicated phenomenon that is sometimes a function of genetics, socioeconomic sta-tus, education, peer pressure, thrill seeking, or experi-menting behavior and sometimes an inappropriate at- tempt at self-medication to treat a real or perceived disease state. It is also clear that drug abuse is a func-tion of the pharmacology of each drug. Almost all abused substances produce an effect on the brain that is perceived as desirable and will initiate drug-seeking behavior.

The professionals in the drug abuse field have such diverse backgrounds that adopting a common terminol-ogy for terms such as addiction and dependence has been difficult. These terms are best defined in the con-text of the pattern and consequences of drug use. Regardless of the characteristics of the drug-induced in-toxication, the properties of the drug that are responsi-ble for drug-seeking behavior are often referred to as the reinforcing properties. These drugs produce effects that are so desirable that the user is compelled to obtain more of the drug.

Recurrent abuse of a drug may properly be termed an addiction when the individual becomes so obsessed with constantly obtaining and using a drug that it be-comes a primary goal and disrupts the ability to func-tion in family, social, or career settings. Typically, espe-cially during the initial stages of drug addiction, the primary reinforcing property is the production of eu-phoria, a term indicating anything from happiness or pleasantness to an excitement resembling sexual or-gasm. Euphoria is considered to be a positive reinforc-ing property, one that the individual would desire or seek. The evaluation of drugs for their reinforcing prop-erties is an assessment of their abuse potential. The crav-ing or desire to obtain additional drug, especially when it is not available, was at one time termed psychological addiction or psychological dependence, though today these terms are not necessarily descriptive or specific. The term addiction should be used to describe recurrent drug abuse, while the term dependence (discussed later) refers to another state, a function of drug use, not drug craving per se. Addiction has also been used to describe recurrent substance abuse by individuals who realize it is harmful to their health but cannot fulfill their desire to stop, such as with tobacco.

Chronic use of a drug over a long period sometimes produces a state of tolerance that may be classified as pharmacokinetic, pharmacodynamic, or behavioral. The degree of tolerance is generally proportional to the drug dose and the duration of use. In some cases, partial or complete tolerance to the euphoric effect of the drug de-velops. However, tolerance to many of the other acute effects also generally develops. Termination of drug abuse may create a condition of drug abstinence, which coincides with the emergence of a measurable physical syndrome. This abstinence syndrome is an indication of dependence, is often referred to as drug withdrawal, and was once termed physical dependence to distinguish it from psychological dependence. It is assumed that adap-tation, or tolerance, to repeated administration of drug is responsible for physical dependence. Generally, the severity of the abstinence syndrome or level of depend-ence is proportional to the degree of tolerance attained. However, the relationship between tolerance and de-pendence has not been fully resolved; tolerance and dependence can occur separately.

Epidemiological studies indicate that most individu-als who abuse any one drug often also abuse, or coabuse, other drugs during the same period. Polydrug abuse complicates conclusions drawn from epidemio-logical and clinical studies. One reason for coabuse of drugs relates to similarities in pharmacological effects. In these cases, once tolerance to the primary drug de-velops, the individual also has cross-tolerance to related classes of drugs. For example, the development of toler-ance to one CNS depressant, such as barbiturates, anxi-olytic agents, or alcohol, simultaneously produces some degree of tolerance to the other depressants. Users may attempt to ameliorate selected drug effects by coabuse of drugs with opposite pharmacological profiles.

Drugs of abuse are derived from numerous chemical classes, and therefore, it is not surprising that they pro-duce distinctive pharmacological effects. Also, the con-sequences of acute and chronic use vary considerably among different classes of compounds, as summarized in Table 35.1. 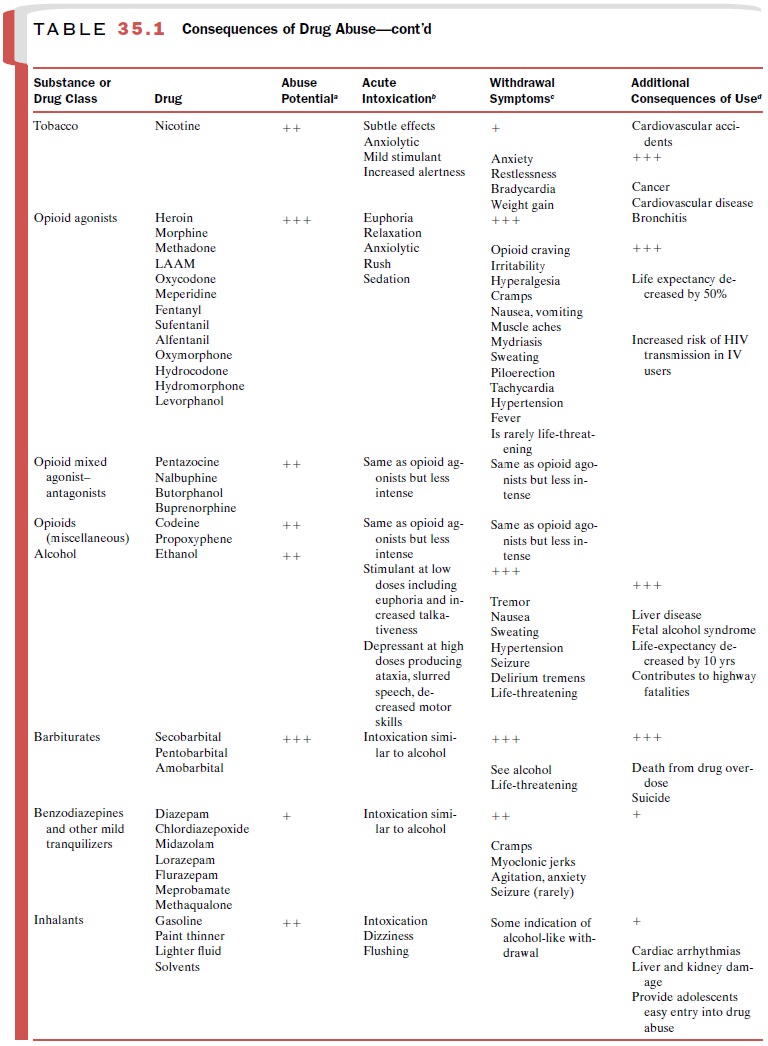 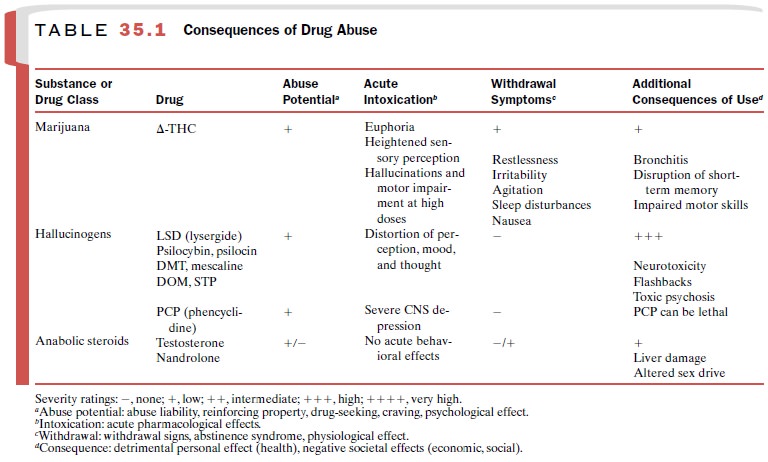