The main tasks involved in the construction of a new line are as follows. (a) Land acquisition (b) Earthwork and bridges (c) Construction of station building, staff quarters, and other allied facilities, including platforms and sheds (d) Laying of plates including ballasting of track (e) Opening of section to traffic

The construction of a new railway line in an area is normally required for one or more of the following reasons.

(a)  Strategic and political considerations

(b) Development of backward areas

Existing single railway lines are also doubled in a few cases to cope with the burden of additional traffic. Recently, a large number of projects have been undertaken for converting existing metre gauge lines into broad gauge lines in order to ensure a uniform gauge for the smooth flow of traffic.

The main tasks involved in the construction of a new line are as follows.

(b) Earthwork and bridges

(c)  Construction of station building, staff quarters, and other allied facilities, including platforms and sheds

(d) Laying of plates including ballasting of track

(e)  Opening of section to traffic

The work of land acquisition should start well in advance so that all the legal and financial formalities are completed in time and the possession of the land is taken for starting construction work. Land acquisition is done with the help of the State Government as per the procedure laid down in the Land Acquisition Act.

The land being acquired should be sufficient for the formation, berm, and borrow pits. It should also have adequate provision for any future expansion. Even when a single line is to be constructed, it should be ascertained that the land made available is suitable for future conversion into a double line. Normally a strip of 15 to 25 m of land is acquired for the construction of a railway line. An extra width of land is acquired for station yards. In the case of small stations, the width normally adopted is 150 × 1000 m.

The minimum measurements of the selected land should be such that it can cater to the following requirement.

Width of formation The land should be adequate so as to accommodate the width of the formation.

Side slope This depends on the nature of the soil and is normally taken as 2:1 (horizontal:vertical).

Width of berm  The width of the berm is usually kept as 3 m.

When the land is expensive, borrow pits need not be provided and instead earth can be borrowed from adjoining areas. Extra land is, however, required for station yards, level crossings, and bridge approaches.

The standard widths of the formation for BG and MG lines are given in Table 28.1

Some of the points to be kept in mind with regard to earthwork are given below.

(a)  Earthwork is normally done in 30-cm layers so that the soil is well compacted.

(b) Mechanical compaction is normally done after each layer of earthwork with the help of a sheep foot roller to obtain 90% maximum dry density at an optimum moisture content.

(d) A blanket of a thickness of about 30 cm is provided at the top of the embankment where the soil is not of good quality.

(e)  In areas where there are both cuttings and embankments, the soil from the cuttings should be used for the embankments up to an economical lead. The economical limit of moving the earth in the longitudinal direction is determined by the mass-haul curve.

(f)  For the early execution of earthwork, the section is normally divided into convenient zones, with each zone requiring earthwork costing Rs 1.5 to 3 million approximately. Tenders are separately invited for each zone so that work can progress simultaneously in all the zones.

Bridges should be designed to bear the load of the heaviest locomotive likely to pass the section. Depending upon the topography of the location and the type of stream to be crossed, hume pipe culverts, RCC slab bridges, plate girders, PRC girder bridges, or steel bridges are designed. Bridges, being important structures, are normally constructed to accommodate a double line even in those sections where only a single line is being set up so that future expansions can be planned.

Service buildings include buildings such as the station master's office or telegraph office, which are basically required for providing assistance in the running of trains. Apart from this, staff quarters and other passenger amenities such as platforms, foot over bridges, waiting halls, and retiring rooms are also provided at the stations. Many other ancillary facilities such as water, drainage, telephone lines, and electricity are also made available at every station.

All these constructions are taken up simultaneously by civil engineers, electrical engineers, and signal engineers so that all work can progress together.

In this method, a temporary line known as a tram line is laid by the side of the proposed track for transporting track material to the site. This method can be useful in flat terrains, where laying of a tram line on the natural ground may be comparatively easier. This method is, however, seldom used in actual practice.

A modification of the above method, called side method, is also in practice, where track and bridge material such as steel girders and RCC slabs is carried to the site in trucks on a service road that runs parallel to the track. These materials are then unloaded near the work site. This method is used only in cases where the terrain is comparatively flat.

This procedure is used in many developed countries, particularly where concrete sleepers are laid, which are quite heavy and not very easy to handle manually.

This method is widely used on Indian Railways. In this method, the rails, sleepers, and other fittings are taken to the base depot and unloaded. The track material is then taken to the rail head, where the tracks linked and packed. The rail head is then advanced up to the point where the track has been laid. The track materials are then taken up to the extended rail head with the help of a dip lorry and the track is linked and packed again. Thus the rail head goes on advancing till the entire track has been linked. The main operations involved in this method are as follows.

Linking of track Once the track material is unloaded, the track is linked with the help of linking gangs. The following procedure is normally adopted for this purpose. 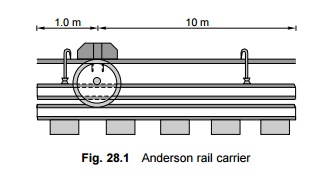 2.The rails are carried using rail tongs and laid on the cess of the bank almost near the final position. Carrying rails is a strenuous job, as about 12 to 15 gangmen are required to carry each rail (each rail weighs about 0.6 t or so). A special type of rail carrier known as the Anderson rail carrier, shown in Fig. 28.1, can be used for carrying rails with lesser strain.

3.  Next the sleepers are distributed over the length of the formation. The rails have markings to indicate the final position of the sleepers as shown in Fig. 28.1.

5.  The rails are then placed on the sleepers and fixed with the help of fittings, which are chosen depending upon the type of sleeper. For example, rail screws are used for fixing rails to wooden sleepers. In the case of steel sleepers, rails are fixed with the help of keys. Bearing plates are also provided wherever required, as per the prescribed track standards.

6.  The rails are joined with each other after ensuring that there is sufficient gap between them. Normally, the initial laying of the tracks is done using three rail panels. Adequate expansion gaps should be provided in the case of single-rail as well as three-rail panels. The recommended expansion gaps are provided with the help of steel liners or shims of appropriate thickness (1 mm to 4 mm), which are fixed between the two rail ends.

Packing of track The track is then thoroughly packed with the help of beaters by the Packing-in-gangs. The following aspects should be examined during this process.

(a)  The track should have a proper gradient.

(b) If the track is on a curve, it should have proper curvature.

(c)  The cross levels should be even. If a track is to be provided with the recommended superelevation, this can be achieved by raising the outer rail.

(d) The track should be thoroughly packed and should be free of hollow spaces.

Ballasting of track The railway line is normally covered with the ballast after the embankment has settled and has endured at least two monsoons. Ballasting is generally done with the help of a ballast train, which has special hoppers that are used for automatically unloading the ballast onto the track. Alternatively, the ballast is taken to the cess and then placed on the track manually. Either method ensures that the ballast is thoroughly packed and inserted properly under the track.