Connections of the Basal Nuclei

The various basal nuclei have numerous connections, but no useful purpose is served by enumerating the afferents and efferents of each nucleus.

Connections of the Basal Nuclei

The various basal nuclei have numerous connections, but no useful purpose is served by enumerating the afferents and efferents of each nucleus. An integrated view of the corpus striatum, along with the substantia nigra and the subthalamic nucleus, is necessary. A scheme showing the main connections is given in Fig. 14.3. 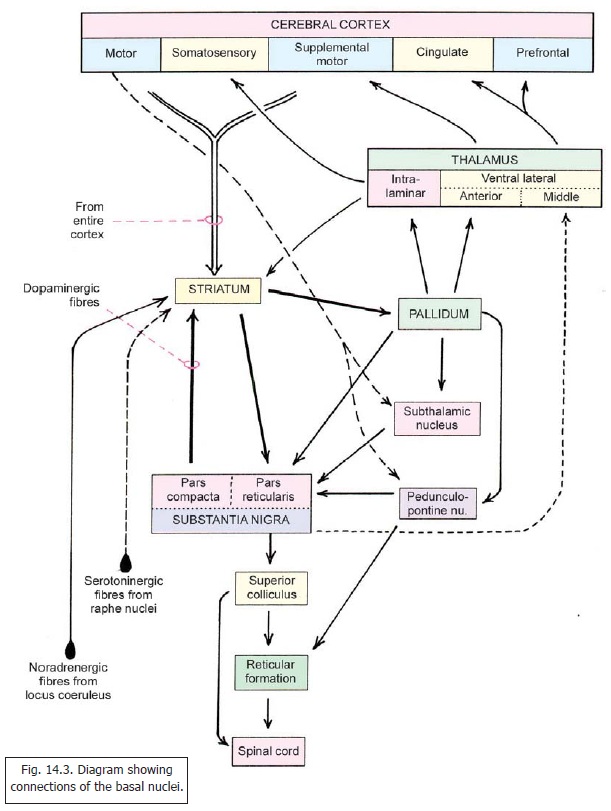 The striatum (caudate nucleus and putamen) receive afferents from the following.

These  fibres  are  dopaminergic.  (Some dopaminergic fibres arise from the retrorubral nuclei lying behind the red nucleus).

4.              Noradrenergic fibres are received from the raphe nuclei (in the reticular formation of the midbrain).

The afferents from the cerebral cortex and from the thalamus provide the striatum with various modalities of sensory information (other than olfactory). The main output of the striatum is concentrated upon the pallidum, and on the substantia nigra (pars reticularis). Fibres also reach the substantia nigra from the pallidum directly, or after relay in the subthalamic nucleus or in the pedunculo-pontine nucleus.

The efferents of the pallidum are as follows.

2.               The pallidum projects to theintralaminar nuclei of the thalamus, from where impulses are relayed to the somatosensory area of the cerebral cortex.

3.              The pallidum also projects to theanterior part of the ventral lateral nucleus of the thalamus. These inputs are relayed to the supplemental motor area.

The pars reticularis projects to the (middle part of the) ventral lateral nucleus of the thalamus. These impulses are relayed to cingulate and prefrontal areas of the cerebral cortex. Other efferents of the pars reticularis reach the superior colliculus. They are relayed from there to the reticular formation of the medulla, and to the spinal cord. These regions also receive fibres descending from the pedunculopontine nucleus.

In summary note the following.

a.              The various basal nuclei are interconnected. The substantia nigra, the subthalamic nucleus, and the pedunculo-pontine nucleus form an integral part of this interconnected system.

b.              Cranially, the system receives fibres from the cerebral cortex; and send back impulses to it through the thalamus.

c.               Descending fibres from the system influence the superior colliculus, the reticular formation of the medulla, and the spinal cord.