Conditions That Cause Abnormal Voltages of the QRS Complex

Conditions That Cause Abnormal Voltages of the QRS Complex

Normally, the voltages in the three standard bipolar limb leads, as measured from the peak of the R wave to the bottom of the S wave, vary between 0.5 and 2.0 millivolts, with lead III usually recording the lowest voltage and lead II the highest. However, these rela-tions are not invariable, even for the normal heart. In general, when the sum of the voltages of all the QRS complexes of the three standard leads is greater than 4 millivolts, the patient is considered to have a high-voltage electrocardiogram.

The cause of high-voltage QRS complexes most often is increased muscle mass of the heart, which ordinarily results from hypertrophy of the muscle in response to excessive load on one part of the heart or the other. For example, the right ventricle hypertro-phies when it must pump blood through a stenotic pul-monary valve, and the left ventricle hypertrophies when a person has high blood pressure. The increased quantity of muscle causes generation of increased quantities of electricity around the heart. As a result, the electrical potentials recorded in the electrocardio-graphic leads are considerably greater than normal, as shown in Figures 12–12 and 12–13. 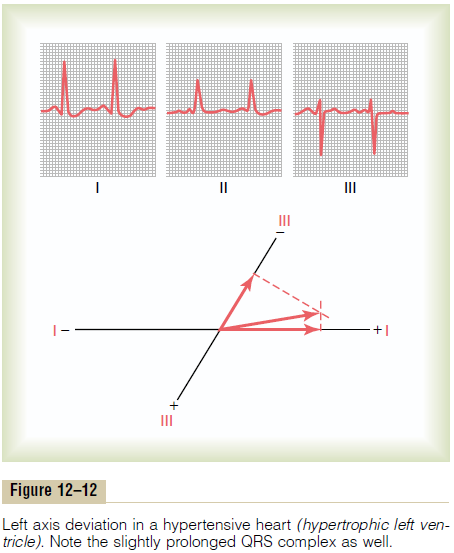 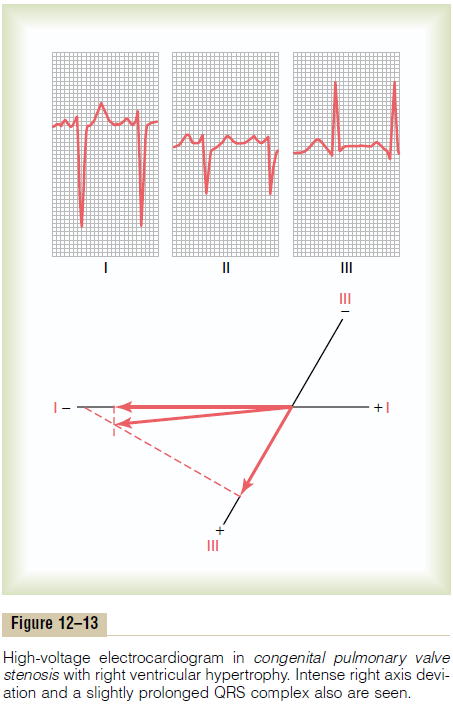 Decreased Voltage of the Electrocardiogram

Decreased Voltage Caused by Cardiac Myopathies. One ofthe most common causes of decreased voltage of the QRS complex is a series of old myocardial arteryinfarctions with resultant diminished muscle mass.Thisalso causes the depolarization wave to move through the ventricles slowly and prevents major portions of the heart from becoming massively depolarized all at once. Consequently, this condition causes some pro-longation of the QRS complex along with the decreased voltage. Figure 12–16 shows a typical low-voltage electrocardiogram with prolongation of the QRS complex, which is common after multiple small infarctions of the heart have caused local delays of impulse conduction and reduced voltages due to loss of muscle mass throughout the ventricles. 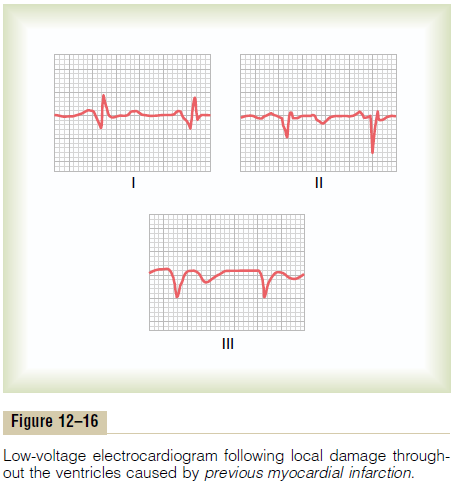 Decreased  Voltage  Caused  by  Conditions  Surrounding  the Heart. One of the most important causes of decreasedvoltage in electrocardiographic leads is fluid in thepericardium. Because extracellular fluid conducts elec-trical currents with great ease, a large portion of the electricity flowing out of the heart is conducted from one part of the heart to another through the pericar-dial fluid. Thus, this effusion effectively “short-circuits” the electrical potentials generated by the heart, decreasing the electrocardiographic voltages that reach the outside surfaces of the body. Pleural effu-sion, to a lesser extent, also can “short-circuit” theelectricity around the heart, so that the voltages at the surface of the body and in the electrocardiograms are decreased.

Pulmonary emphysema can decrease the electrocar-diographic potentials, but by a different method from that of pericardial effusion. In pulmonary emphysema, conduction of electrical current through the lungs is depressed considerably because of excessive quantity of air in the lungs. Also, the chest cavity enlarges, and the lungs tend to envelop the heart to a greater extent than normally. Therefore, the lungs act as an insulator to prevent spread of electrical voltage from the heart to the surface of the body, and this results in decreased electrocardiographic potentials in the various leads.