Effect of Slow Conduction of the Depolarization Wave on the Characteristics of the T Wave, Shortened Depolarization in Portions of the Ventricular Muscle as a Cause of T Wave Abnormalities.

Abnormalities in the T Wave 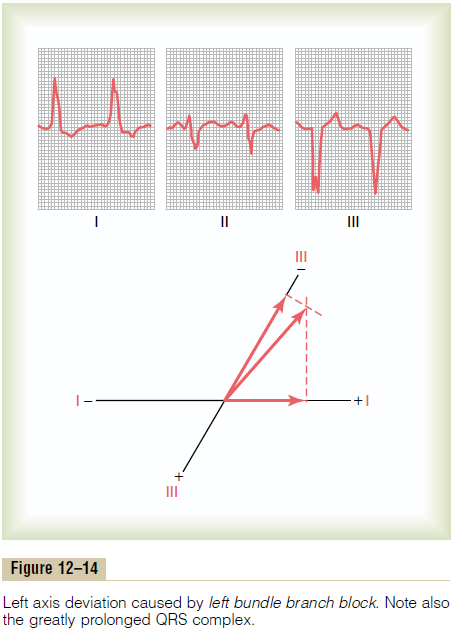 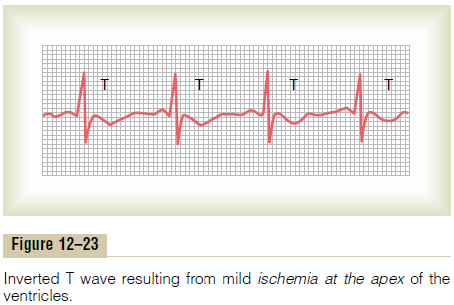 Instead, the base of the ventricles would repolarize ahead of the apex, and the vector of repolarization would point from the apex toward the base of the heart, opposite to the standard vector of repolariza-tion. Consequently, the T wave in all three standard leads would be negative rather than the usual positive. Thus, the simple fact that the base of the ventricles has a shortened period of depolarization is sufficient to cause marked changes in the T wave, even to the extent of changing the entire T wave polarity, as shown in Figure 12–23.

Mild ischemia is by far the most common cause ofshortening of depolarization of cardiac muscle, because this increases current flow through the potas-sium channels. When the ischemia occurs in only one area of the heart, the depolarization period of this area decreases out of proportion to that in other portions. As a result, definite changes in the T wave can take place. The ischemia might result from chronic, pro-gressive coronary occlusion; acute coronary occlusion; or relative coronary insufficiency that occurs during exercise.

One means for detecting mild coronary insufficiency is to have the patient exercise and to record the elec-trocardiogram, noting whether changes occur in the T waves. The changes in the T waves need not be spe-cific, because any change in the T wave in any lead— inversion, for instance, or a biphasic wave—is often evidence enough that some portion of the ventricular muscle has a period of depolarization out of propor-tion to the rest of the heart, caused by mild to moder-ate coronary insufficiency.

Effect of Digitalis on the T Wave. As discussed, digitalis is a drug that can be used during coronary insufficiency to increase the strength of cardiac muscle contraction. But when overdosages of digitalis are given, depolarization duration in one part of the ven-tricles may be increased out of proportion to that of other parts. As a result, nonspecific changes, such as T wave inversion or biphasic T waves, may occur in one or more of the electrocardiographic leads. A biphasic T wave caused by excessive administration of digitalis is shown in Figure 12–24. Therefore, changes in the T wave during digitalis administration are often the ear-liest signs of digitalis toxicity. 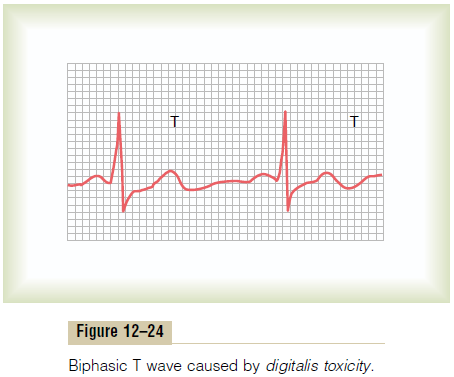