The continuity equation is governed from the principle of conservation of mass.It states that the mass of fluid flowing through the pipe at the cross-section remains constants,if there is no fluid is added or removed from the pipe.

Let us make the mass balance for a fluid element as shown below: (an open-faced cube) 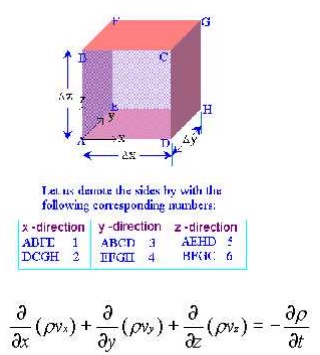 This is the continuity equation for every point in a fluid flow whether steady or unsteady , compressible or incompressible.

For steady, incompressible flow, the density r is constant and the equation simplifies to

For two dimensional incompressible flow this will simplify still further to 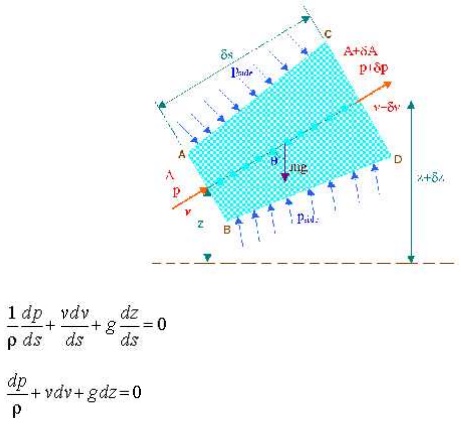 This is known as Euler's equation, giving, in differential form the relationship between p, v, r and elevation z, along a streamline for steady flow.

Bernoulli’s Equation relates velocity, pressure and elevation changes of a fluid in motion. It may be stated as follows “ In an ideal incompressible fluid when the flow is steady and

continuous the sum of pressure energy, kinetic energy and potential energy is constant along streamline”

This is the basic from of Bernoulli equation for steady incompressible inviscid flows. It may be written for any two points 1 and 2 on the same streamline as

The contstant of Bernoulli equation, can be named as total head (ho) has different values on different streamlines.

The total head may be regarded as the sum of the piezometric head h* = p/rg + z and the kinetic head v2/2g.

Bernoullie equation is arrived from the following assumptions:

2.     Incompressible flow - acceptable if the flow Mach number is less than 0.3.

4.     Valid for flow along a single streamline; i.e., different streamlines may have different ho.

Range of validity of the Bernoulli Equation:

Bernoulli equation can be corrected and used in the following form for real cases.