"is a" relationship Inheritance

Composition - class has an object from another class as adata member

Employee “is a” BirthDate; //Wrong!

“Uses A” And “Knows A” Relationships “uses a” relationship

One object is aware of another

you define a pointer to an int member of class A like this:

Manipulating a data member through an object

The statement numbered 1 defines a pointer to an int member of class A and initializes it with the address of num. Now you can use the pointer pmi to examine and modify num's value in any object of class A:

Manipulating a data member through an object's pointer

Or using a pointer to an object derived from A:

In fact, a pointer to a member function looks just like an ordinary pointer to function, except that it also contains the class's name immediately followed by the :: operator. You can invoke the member function to which pmf points like this:

Pointers to member functions respect polymorphism; if you call a virtual member function through a pointer to member, the call will be resolved dynamically as the following code shows:

Note that you cannot take the address of constructors and destructors.

The Underlying Representation of Pointers to Members

To get a notion of how your compiler represents pointers to members, use the size of operator. In the following example, the sizes of a pointer to data member and a pointer to a member function are taken. As you can see, they have different sizes, hence, different representations:

Note that each of these pointers may have a different representation, depending on the class in question and whether the member function is virtual. 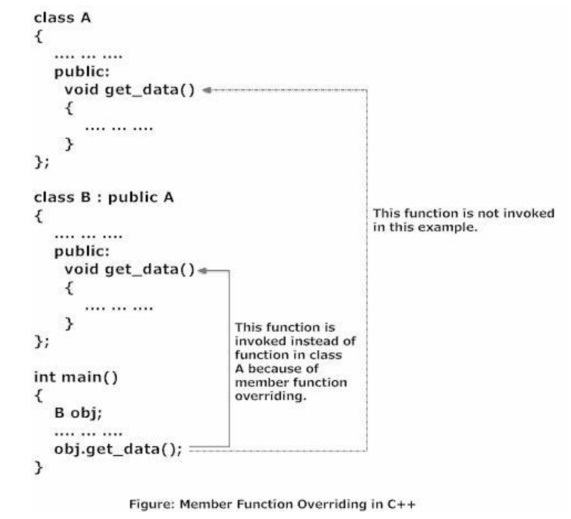 Accessing the Overridden Function in Base Class From Derived Class

To access the overridden function of base class from derived class, scope resolution operator

::. For example: If you want to access get_data() function of base class from derived class in above example then, the following statement is used in derived class.

It is because, if the name of class is not specified, the compiler thinks get_data() function is 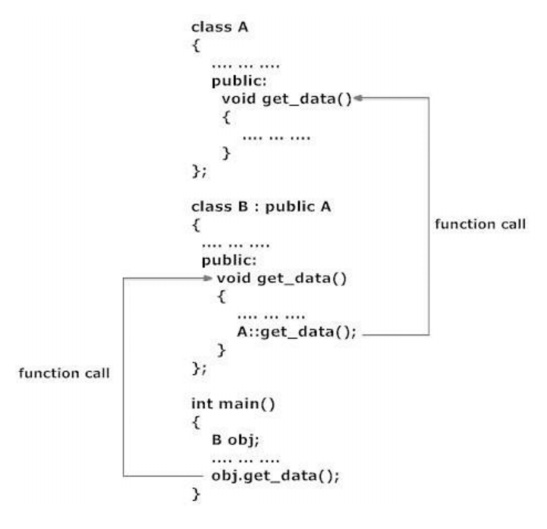 Object Oriented Programming and Data Structures
Anna University - All Subjects
Anna University ECE - All Subjects
Engineering - All Subjects
Electronics Engineering - All Subjects
Object Oriented Programming and Data Structure : Inheritance and Polymorphism
Inheritance
Dynamic Binding
Public, Private, Protected inheritance
This Pointer
Abstract classes
Using Constructors and Destructors in Derived Classes
Composition vs. Inheritance
What is virtual function? Explain with an example.
What is a virtual destructor? Explain the use of it.
Multiple inheritances with suitable c++ coding
Polymorphism and Different Types of Polymorphism
Multiple catch statement with help of suitable C++ coding
Various file modes and its syntax
Need for exception with try, catch and throw keywords
Various forms of inheritance in C++ with necessary coding
Important Short Questions and Answers: Inheritance and Polymorphism