The basic theories of the cognitive model are rooted in a long tradition of viewing cognitions as primary determinants of emo-tion and behavior.

The basic theories of the cognitive model are rooted in a long tradition of viewing cognitions as primary determinants of emo-tion and behavior. For excellent reviews of the historical bases of cognitive therapy, see Dobson and Block (1988) Clark et al. (1999). The description of cognitive theories given here is based largely on Beck’s concepts. This model of therapy tends to give somewhat more emphasis to cognitive than behavioral factors in treatment interventions, but both are considered to be integral parts of the model (Figure 69.1). 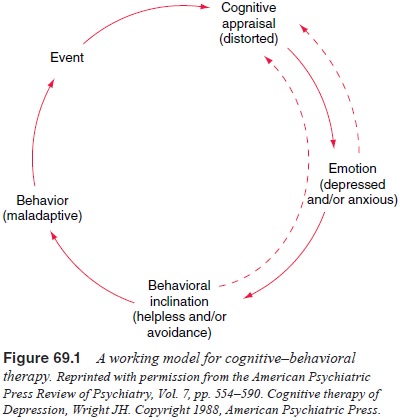 Depending on the case formulation and the phase of therapy, attention may be directed primarily at cognitive or behavioral as-pects of the disorder. In most cases, a combination of cognitive and behavioral techniques is used.

Figure 69.2 displays a simplified model for understanding the relationships between environmental events, cognitions, emo-tion and behavior (Wright and Beck, 1994; Wright, 1988; Thase and Beck, 1993). This model is based on the theoretical assumptionthat environmental stimuli trigger cognitive processes and the ensuing cognitions give the event personal meaning and elicit subsequent physiological and affective arousal. These emotions, in turn, have a potent reciprocal effect on cognitive content and information processing, such that cascades of dysfunctional thoughts and emotions can occur. The individual’s behavioral re-sponses to stimuli and thoughts are viewed as both a product and a cause of maladaptive cognitions. Thus, treatment interventions may be targeted at any or all components of the model. 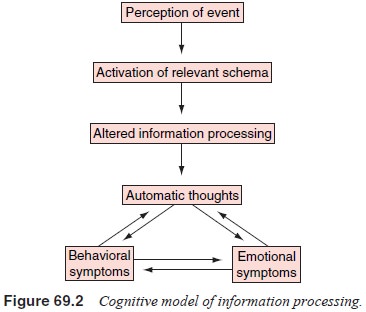 Of course, many other factors are involved in psychiatric disorders, including genetic predisposition, state-dependent neuro-biological changes and various interpersonal variables. These influ-ences are also included in the case conceptualization in CBT. Wright and Thase (1992) have outlined an expanded cognitive–biological model that can be used for synthesizing cognitive and neurobiologi-cal factors in a combined therapy approach. Contemporary psychi-atric research is striving to understand how best to combine and/or sequence CBT and pharmacotherapy, and relate CBT technique to new understandings in cognitive neuroscience. Nevertheless, the working model in Figure 69.2 can be used as a practical template to guide the therapist’s case formulation and interventions.

Dysfunctional information processing is apparent in many psychi-atric disorders at two major levels of cognition–automatic thoughts and schemas (Beck, 1976; Dobson and Shaw, 1986; Teasdale, 1983; Segal, 1988; Alfrod and Correia, 1994). Automatic thoughts are cognitions that stream rapidly through an individual’s mind, whether spontaneously or in response to some prompt or stimu-lus. Automatic thoughts may be triggered by affective arousal (i.e., anger, anxiety, or sadness), or conversely, affective shifts are gener-ally accompanied by automatic negative thoughts (Teasdale, 1983). Their automatic nature refers to their speed of entry into awareness and their implicit believability. In this way, automatic thoughts have emotional validity (Thase and Beck, 1993). For most people, before therapy, automatic thoughts are usually not examined carefully for validity. In fact, many people susceptible to anxiety or depression are likely to use an affectively focused logic referred to as emotional reasoning (i.e., “I feel that this is correct, therefore it is correct”). Although we all experience automatic thoughts, in depression, anx-iety and other psychiatric disorders the thoughts are distinguished by their greater intensity and frequency (LeFebvre, 1981).

Schemas represent the sum of one’s beliefs and attitudes. They are the basic assumptions or unspoken rules that act as templates for screening and decoding information from the environment (Segal, 1988; Wright and Beck, 1983; Young and

Lindermann, 1992). Psychological well-being may be understood in part by development of a set of schemas that yield realistic appraisals of self in relation to world (e.g., “I’m reasonably attrac-tive, but looks aren’t everything”, “I can be loved under the right circumstances”, or “I must work harder to compensate for an av-erage intellect”). Although unspoken, schemas may be inferred from one’s beliefs and attitudes. In the cognitive model, dysfunc-tional attitudes are the structural “bridge” between pathological schemas and automatic negative thoughts. Schemas pertaining to safety, vulnerability to threat, self-evaluation, one’s lovability, and one’s competence or self-efficacy contain the ground rules for personal behavior that are particularly relevant to the understand-ing of disorders such as anxiety, depression, or characterological 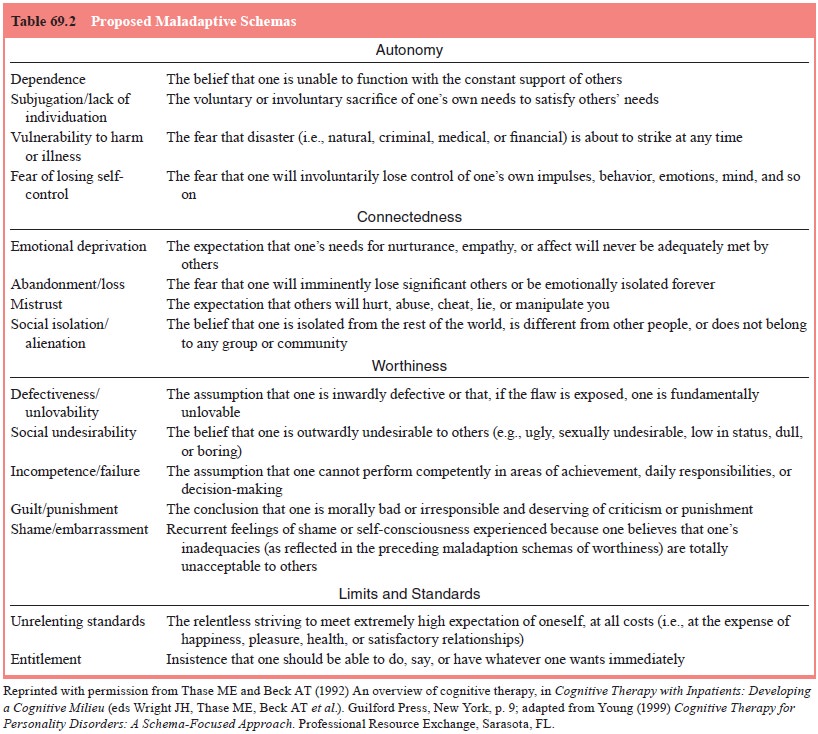 disturbances (Segal, 1988; Young and Lindermann, 1992; Blackburn et al., 1986b; Beck et al., 1990). A number of schemas relevant to psychiatric illness are listed in Table 69.2. Bowlby (1985) has noted that most psychopathologically relevant sche-mas are developed early in life, when the individual is relatively powerless and dependent on caregivers.

The cognitive model of psychiatric illness emphasizes the concept of stress-diathesis (Thase and Beck, 1993; Metalsky et al., 1987). From this perspective, a schema such as “I must be loved to have worth”, might remain latent until activated by a relevant life stressor (i.e., a romantic breakup).

Underlying schemas may be buttressed by either mala-daptive or adaptive attitudes (e.g., “No matter how hard I try, I’m bound to fail” versus “I’m a survivor; if I just hang in there things will be okay”), but many of these cognitive structures have mixed features (Wright and Beck, 1994). Schemas such as “If I’m not perfect, I’m a failure” may lead to driven obsessional behav-ior, rigid attitudes and beliefs, and frequent bouts of dysphoric or irritable moods. However, basic perfectionistic beliefs such as these can also result in high levels of performance and success.

The results of many studies suggest that disturbances in information processing are essential features of depression and anxiety.