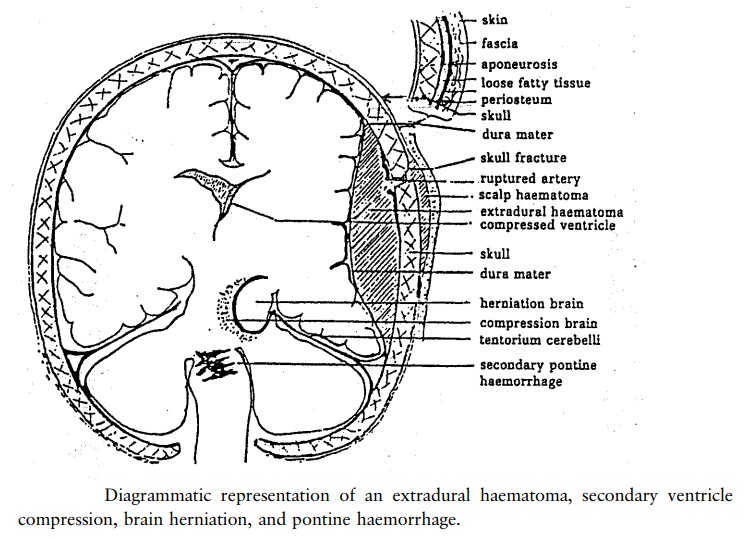 Although the brain can be injured by hypoxic, toxic and biochemical conditions, this study unit focuses primarily on injury to the brain and head due to physical forces.

Although the brain can be injured by hypoxic, toxic and biochemical conditions, this study unit focuses primarily on injury to the brain and head due to physical forces.

Head injuries can be classified in two ways. First, according to type of injury: an injury can be limited to the impact area, in other words, where the blow landed, and it is then called the focal area. If it is more widespread and involves the whole brain or large areas, it is called a diffuse injury.

Head injuries are also classified according to time of origin and clinical presentation. If the injury occurs at impact (such as a contusion) it is regarded as an immediate injury. If it occurs later, it is regarded as a delayed injury  -   these are usually the complications of a head injury and include increased intra-cranial pressure and herniations. Please note that intra-cranial injuries occur at the moment of impact but only have an effect later as the bleeding first has to become sufficient to have an effect on the brain volume. 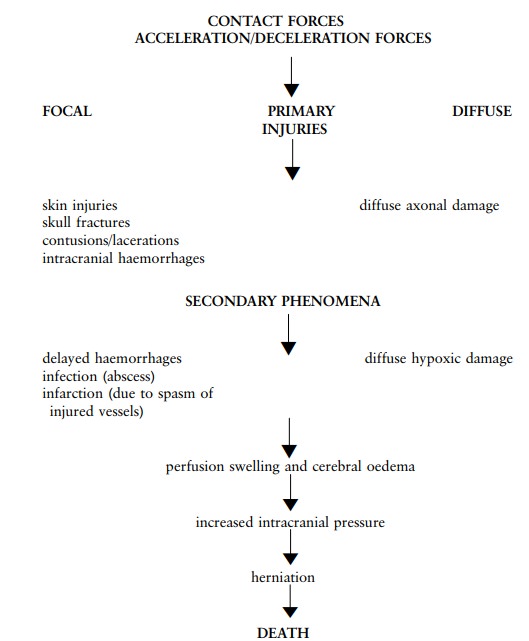 An injury can be either focal or diffuse, as has been said. Focal injuries can be skin injuries, skull fractures, contusions of the brain or intracranial haemorrhages.

The most common diffuse injury is diffuse axonal injury. In severe trauma to the brain, diffuse brain injury with numerous small haemorrages throughout the brain may occur, and this is incompatable with life. As these primary injuries are complicated by other events like hypoxia, infection, delayed haemorrhages, et cetera, the brain may start to enlarge due to swelling.

As the brain is enclosed in the rigid cranial cavity, an increase in size will have detrimental effects on the brain tissue. Brain tissue will be forced from one region to another by the process of herniation. Ultimately, the increased pressure on the brainstem will impact negatively on the vital centres controlling respiration, et cetera. This is usually the final route for any type of intracranial pathology, be it an infarct, tumour or haemorrhage (fig 7.13). 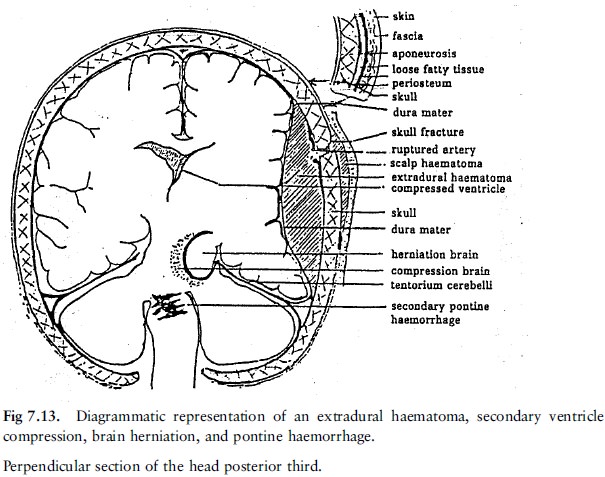 The different types of head injury will now be discussed in detail.