The Creator created the world with various types of diversified plants. There are such small plants, which cannot be seen with the naked eyes, again there are also such big plants that can be seen from a long distance. There are many pants. whcih do not have flowers. Again there are such plants which cannot be differentiated into root, stem and leaf. There are some plants, which have got no chlorophyll. They are not green and cannot prepare their own food. The number of plants in this diversified plant world is innumerable. They are in lacs not in thousands. How can we know this great plant world? For this there needs a well thought and well organized system. This is the system of plant classification.

Classification is a system of arrangement in which one can know the plant kingdom easily. Considering the characteristics of plants of the vast plant kingdom, plants having similar characteristics are arranged in groups, i.e., one kind of plant is placed in one group. Thus plants are successively arranged in groups and sub-groups namely: Division, Class, Order, Family, Genus and Species etc. This systematic arrangement is called classification.

The main objective of classification is to know easily the vast plant kingdom in short time.

3.        To preserve properly the acquired knowledge.

Unit of classification and Taxa:

There are certain steps for classification of plant kingdom. These step are called Taxa and is singular Tax.on. Using the steps classification is to be done ICBN or International Code of Botanical Nomenclature is the International constitution for naming the plants. Seven main. steps are recognised by ICBN These are:

3.  Class: Each division is divided into several classes.

4.  Order: Each class is divided into several orders.

5.  Family: Each order is divided into several families.

6.  Genus: Each family is divided into several Genera (PI. of Genus).

7.  Species: Each genus is divided into several species.

There are aboqt 250000 fruit producing plants. The name of the species should be written in small letters. Usually several members comprises the higher step, e.g. several species constitute a genus and several genera constitute a family etc. Sometime only one member of a Taxon may constitute a higher Taxon. In case of necessity any unit may be splitted to sub-unit for which the term sub should be prefixed against the main unit (Taxa).e.g. Sub Order, Sub-Family Sub-Genus, Sub-species etc.

Name of a plant consisting of two parts - Generic (Genus) Species. name (Species) together make a complete name of a plant. For example Artocarpus heterophyllus is the. scientific name. of jackfruit, the national fruit of Bangladesh. In this name there are two words, first one is Artocarpus and the second one is heterophyllus. This type of nomenclature, i.e. one name consisting of two words, is called Binomial Name and the method of naming plants by two words is called Binomial System of Nomenclature. ICBN formulate the regulations of giving a scientific name to a plant. According to ICBN a scientific name (Botanical name) of a plant:

4.  Shall be written in Roman letters.

5.  Shall be printed in Italic form i.e. bending at right.

6.  In case of hand writing names should be underlined.

The main principle of classification is to arrange all plants of a similar character (one type of character), in a group. Previously the entire living creatures were placed either in Plant or in Animal Kingdom. But as more and more information regarding characteristics of various living beings, there develops a controversy regarding these two kingdoms theory. There established a concept of five kingdoms. According to this concept:

1.        The entire Prokaryotic creature is placed in the Kingdom Monera. As a result Virus and Bacteria are separated from Plant Kingdom.

2.        There were some controversies regarding some uniCellular Eukaryotic organisms (e.g., Euglena), that whether they are plants or animals? Because they simultaneously possess some characters of plant and some characters of animal. To solve this controversy now all the unicellular prokaryotes are placed in the Kingdom of Protista or Protoctista. All the unicellular Algae and Protozoa are placed in this Kingdom.

3.        Rest of the multicellular eukaryotic organisms are arranged in there different kingdoms depending on their nutrition and food habit. They are,(A) Plantae - Autotrophic, photosynthetic green creatures. (B) Fungi -Saprophytic, those which intake (absorb) liquid food from organic bodies and (C) Animalia - Rest of the heterotropic creatures. As a result of this classification the range of Plant Kingdom. become reduced, as Algae, Fungi, Bacteria and Viruses are separated from Plant Kingdom.

A tabular form showing present position, characteristics and name of different plant groups are shown below :- 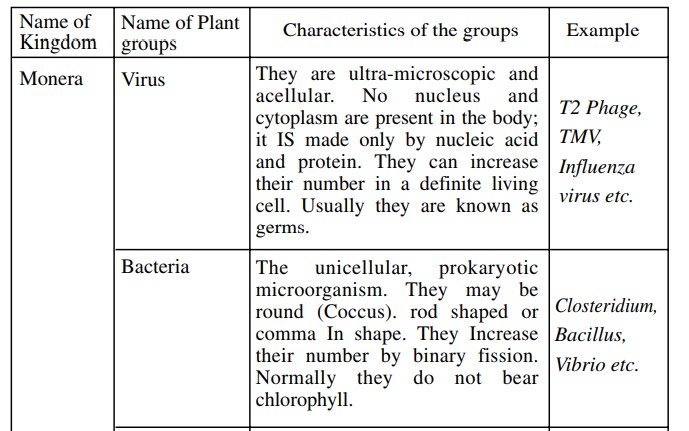 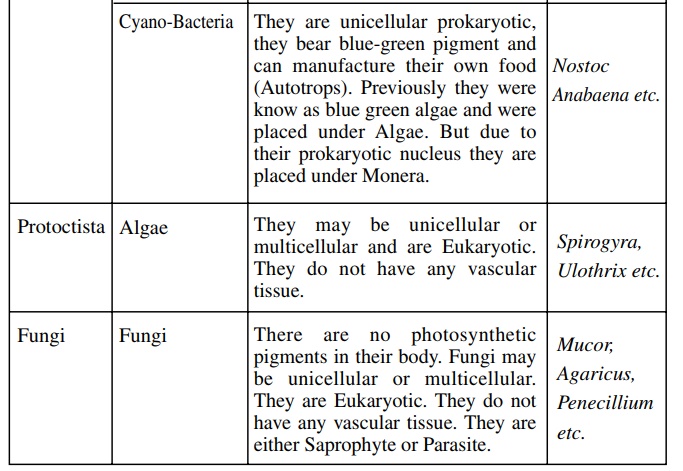 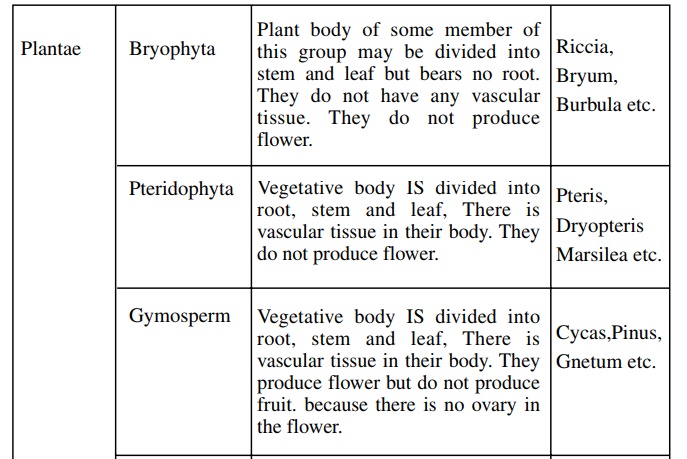 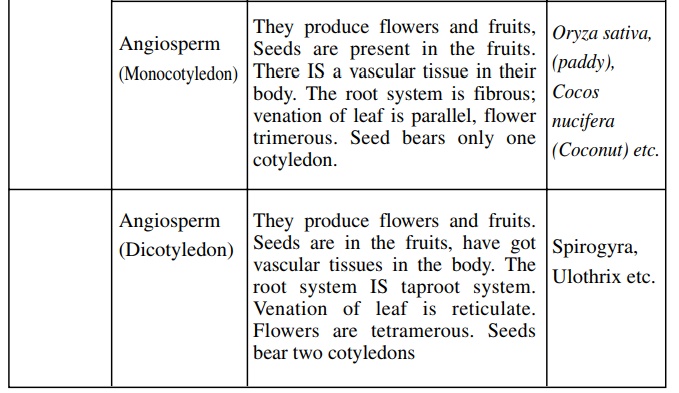