Classification of CT and DT signals

Classification of CT and DT signals:

for any integer value of n, where T >0 is the period of the function and − ∞ < t <∞ . The signal repeats itself every T sec. Of course, it also repeats every 2 T,3T and nT. Therefore, 2T, 3T and nT are all periods of the function because the function repeats over any of those intervals. The minimum positive interval over which a function repeats itself is called the fundamental period T0.T0 is the smallest value that satisfies the condition x ( t ) = x ( t+T0). The fundamental frequency f 0 of a periodic function is the reciprocal of the fundamental period f0=1/T0. It is measured in Hertz and is the number of cycles (periods) per second. The fundamental angular frequency ω0 measured in radians per second is ω0=2πT0= 2πf0. A signal that does not satisfy the condition in (2.1) is said to be a periodic or non-periodic.

Deterministic Signals are signals who are completely defined for any instant of time, there is no uncertainty with respect to their value at any point of time. They can also be described mathematically, at least approximately. Let a function be defined as 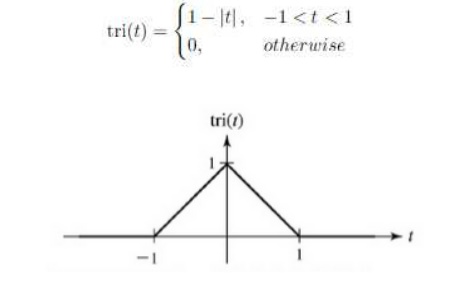 A random signal is one whose values cannot be predicted exactly and cannot be described by any exact mathematical function, they can be approximately described.

Consider v(t) to be the voltage across  a resistor R producing a current i(t). The instantaneous power p(t) per ohm is defined as, Total energy E and average power P on a per-ohm basis are

For an arbitrary continuous-time signal x (t), the normalized energy content E of x(t) is defined as,

The normalized average power P of x (t) is defined as,

Similarly, for a discrete-time signal x[n], the normalized energy content E of x[n] is defined as,

The normalized average power P of x[n] is defined as,

A system is defined as a physical device which contains set of elements or functional blocks and that generates a response or output signal for a given input.