The chance of an event happening when expressed quantitatively is probability.

The chance of an event happening when expressed quantitatively is probability. 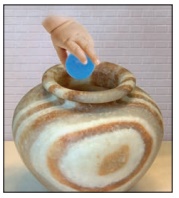 For example, An urn contains 4 Red balls and 6 Blue balls. You choose a ball at random from the urn. What is the probability of choosing a Red ball?

The phrase ‘at random’ assures you that each one of the 10 balls has the same chance (that is, probability) of getting chosen. You may be blindfolded and the balls may be mixed up for a “fair” experiment. This makes the outcomes “equally likely”.

Note that the sum of the two probabilities is 1. This means that no other outcome is possible.

The approach we adopted in the above example is classical. It is calculating a priori probability. (The Latin phrase a priori means ‘without investigation or sensory experience’). Note that the above treatment is possible only when the outcomes are equally likely.

Classical probability is so named, because it was the first type of probability studied formally by mathematicians during the 17th and 18th centuries.

Let S be the set of all equally likely outcomes of a random experiment. (S is called the sample space for the experiment.)

Let E be some particular outcome or combination of outcomes of an experiment. (E is called an event.)

The probability of an event E is denoted as P(E).

The empirical approach (relative frequency theory) of probability holds that if an experiment is repeated for an extremely large number of times and a particular outcome occurs at a percentage of the time, then that particular percentage is close to the probability of that outcome.