The most common circulatory disturbances in the PACU are hypotension, hypertension, and arrhythmias.

The most common circulatory disturbances in the PACU are hypotension, hypertension, and arrhyth-mias. The possibility that the circulatory abnor-mality is secondary to an underlying respiratory disturbance should always be considered before any other intervention, especially in children.

Hypotension is usually due to relative hypovolemia, left ventricular dysfunction, or, less commonly, excessive arterial vasodilatation. Hypovole-mia is by far the most common cause of hypotension in the PACU. Absolute hypovolemia can result from inadequate intraoperative fluid replace-ment, continuing f ulid sequestration by tissues (“third-spacing”), wound drainage, or hemorrhage. Vasoconstriction during hypothermia with central sequestration of intravascular volume may mask hypovolemia until the patient’s temperature begins to rise again; subsequent peripheral vasodilation during rewarming unmasks the hypovolemia and results in delayed hypotension. Relative hypovole-mia is often responsible for the hypotension associ-ated with spinal or epidural anesthesia (especially in the setting of concomitant general anesthesia), venodilators, and α-adrenergic blockade: the venous pooling reduces the effective circulating  blood volume, despite an otherwise normal intra-vascular volume . Hypotension associated with sepsis and allergic reactions is usu-ally the result of both hypovolemia and vasodila-tion. Hypotension from a tension pneumothorax or cardiac tamponade is the result of impaired venous return to the right atrium.Left ventricular dysfunction in previously healthy persons is unusual, unless it is associated with severe metabolic disturbances (hypoxemia, acidosis, or sepsis). Hypotension due to ventricu-lar dysfunction is primarily encountered in patients with underlying coronary artery or valvular heart disease or congestive heart failure and is usually precipitated by fluid overload, myocardial ischemia, acute increases in afterload, or arrhythmias.

Mild hypotension during recovery from anesthesia is common and typically does not require intensive treatment. Significant hypotension is often defined as a 20% to 30% reduction in blood pressure below the patient’s baseline level and usually requires cor-rection. Treatment depends on the ability to assess intravascular volume. An increase in blood pres-sure following a f luid bolus (250–500 mL crystal-loid or 100–250 mL colloid) generally confirms hypovolemia. With severe hypotension, a vasopres-sor or inotrope (dopamine or epinephrine) may be necessary to increase arterial blood pressure until the intravascular volume deficit is at least partially corrected. Signs of cardiac dysfunction should be sought in patients with heart disease or cardiac risk factors. Failure of a patient with severe hypotension to promptly respond to initial treatment mandates invasive hemodynamic monitoring, or, better still, echocardiographic examination; manipulations of cardiac preload, contractility, and afterload are often necessary. The presence of a tension pneumo-thorax, as suggested by hypotension with unilater-ally decreased breath sounds, hyperresonance, and tracheal deviation, is an indication for immediate pleural aspiration, even before radiographic confir-mation. Similarly, hypotension due to cardiac tam-ponade, usually following chest trauma or thoracic surgery, often necessitates immediate pericardiocen-tesis or surgical exploration.

Mild hypertension generally does not require treat-ment, but a reversible cause should be sought. Marked hypertension can precipitate postopera-tive bleeding, myocardial ischemia, heart failure, or intracranial hemorrhage. Although decisions to treat postoperative hypertension should be indi-vidualized, in general, elevations in blood pressure greater than 20% to 30% of the patient’s baseline, or those associated with adverse effects such as myo-cardial ischemia, heart failure, or bleeding, should be treated. Mild to moderate elevations can be treated with an intravenous β-adrenergic blocker, such as labetalol, esmolol, or metoprolol; an angiotensin-converting enzyme inhibitor, such as enalapril; or a calcium channel blocker, such as nicardip-ine. Hydralazine and sublingual nifedipine (when administered to patients not receiving β-blockers) may cause tachycardia and myocardial ischemia and infarction. Marked hypertension in patients with limited cardiac reserve requires direct intraarterial pressure monitoring and should be treated with an intravenous infusion of nitroprusside, nitroglycerin, nicardipine, clevidipine, or fenoldopam. The end point for treatment should be consistent with the patient’s own normal blood pressure.

Bradycardia often represents the residual effects of cholinesterase inhibitors, opioids, or β-adrenergic blockers. Tachycardia may represent the effect of an anticholinergic agent; a β-agonist, such as albuterol; reflex tachycardia from hydralazine; and more com-mon causes, such as pain, fever, hypovolemia, and anemia. Anesthetic-induced depression of barore-ceptor function makes heart rate an unreliable mon-itor of intravascular volume in the PACU.

Premature atrial and ventricular beats often represent hypokalemia, hypomagnesemia, increased sympathetic tone, or, less commonly, myocardial ischemia. The latter can be diagnosed with a 12-lead ECG. Premature atrial or ventricular beats noted in the PACU without discernable cause will often also be found on the patient’s preoperative ECG, if one is available. Such patients with a preexisting history of extrasystoles may or may not have a history of palpitations or other symptoms, and previous car-diology evaluation often has found no definitive cause. Supraventricular tachyarrhythmias, including paroxysmal supraventricular tachycardia, atrial flut-ter, and atrial fibrillation, are typically encountered in patients with a history of these arrhythmias and are more commonly encountered following thoracic surgery. 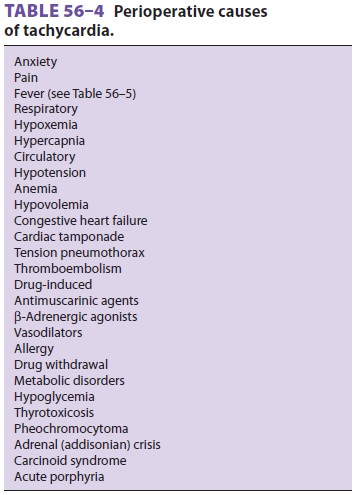 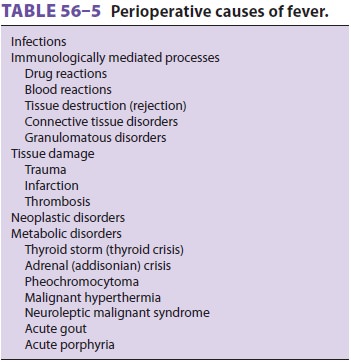