Chlorine is a greenish-yellow gas with a pungent odour.

Iodine and iodides have been discussed under Caustics. The other halogens of importance include chlorine,bromine, and fluorine. All halogens combine with hydrogen to form acids, and with metals to form salts.

Chlorine is a greenish-yellow gas with a pungent odour.

·              Chlorine is not found free in nature due to its reactivity with other chemicals. Instead, it is found as sodium chloride in land-locked lakes, as rock salt in underground deposits, in brines, and in natural deposits of sylvite and carnallite

·              It is used extensively in pulpmills, where wood chips are processed into pulp as part of the paper manufacturing process.

·              Chlorine is employed in purifying drinking and swimming water, for sanitation of industrial and sewage wastes and other disinfecting uses.

Concentrations of over 50 to 100 ppm when inhaled can be rapidly fatal. Instant death can occur at concentrations over 1000 ppm. Table 8.2 gives an overview of effects to varying degrees of exposure to chlorine gas. 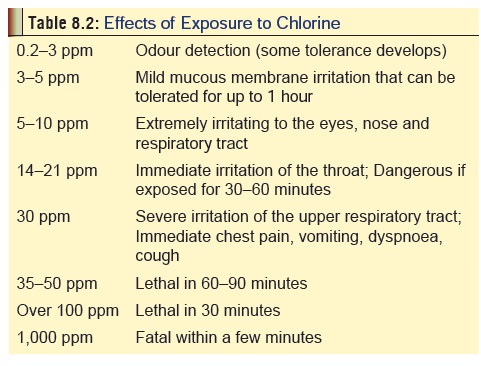 ·     Chlorine is an extremely active oxidising agent and causes rapid and extensive destruction of organic tissue. It combines with tissue water to produce HCl, producing injury and reactive oxygen species.

·     Chlorine gas in concentrated amounts may be caustic to mucous membranes when inhaled or ingested; otherwise it is a strong irritant. When in contact with moist tissue, nascent oxygen or “active oxygen” is released as hydrogen is removed from H2O. Nascent oxygen is a potent oxidiser, resulting in tissue damage. Secondary irritation occurs from acids formed during this reaction.

·              Contact with respiratory epithelium produces initial alve-olar capillary congestion followed by focal and confluent patches of high fibrinogen oedematous fluid. Acute lung injury peaks in 12 to 24 hours. The fluid is interstitial at first but can fill the alveoli. Once this occurs, copious frothy, blood-tinged sputum is observed.

·      Liquid chlorine can cause cutaneous and mucosal burns.

o     Conjunctivitis, anosmia, and green discolouration of hair have also been reported.

o     Chronic exposure to chlorine gas is one of the most frequent causes of occupational asthma.

·      Chlorine gas leak into the atmosphere can be detected by opening a bottle of concentrated ammonium hydroxide which will cause the production of heavy, white fumes of ammonium chloride.*

·      Mild poisoning can be managed with bed rest and oxygen administration.

·      Cough can be controlled with codeine and bronchodilators.

·      Nebulised sodium bicarbonate (3.75% solution) is claimed to be effective in ameliorating respiratory symptoms by neutralising the acid formed when chlorine comes into contact with water in the airways. This can however provoke an exothermic reaction and doubts have been expressed as to its efficacy and safety.

·      The role of corticosteroids in the treatment of pulmonary oedema is also controversial.

·      Eye exposure must be treated with copious irrigation of water or saline. Expert ophthalmic consultation is advisable to rule out corneal damage.

Most cases of poisoning are accidental arising out of domestic or industrial exposure. Sometimes, exposure occurs at swim-ming pools where chlorine is often used as a disinfectant.