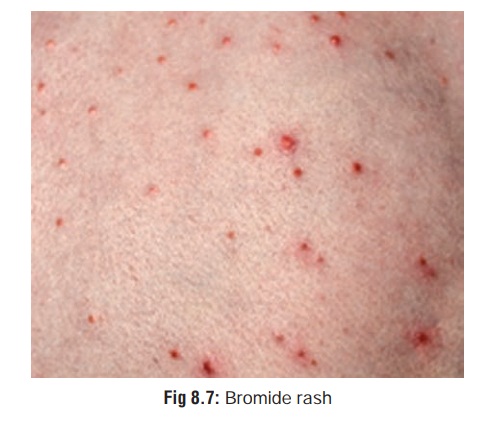 Bromine is a dark reddish-brown, heavy liquid with irritant brown fumes. By itself it is rarely encountered in poisoning cases, while the salts (bromides) have often been implicated, especially in the past when they were used extensively in therapeutics as sedative-hypnotics. Even today there are several therapeutic drugs (many of them over-the-counter preparations) which contain bromide ion and have the potential for chronic toxicity (Table 8.3). Methyl bromide is used in soil fumigation which can result in bromide levels as high as 380 mg/kg in vegetables such as lettuce, spinach, tomatoes, radishes, and cucumbers among others. Ethylene dibromide is used in the posthar-vest fumigation of warehouses, ships’ holds, and quarantine chambers affecting fruits, wheat, almonds, tobacco, and dried mushrooms; achieving levels as high as 300 mg/kg. 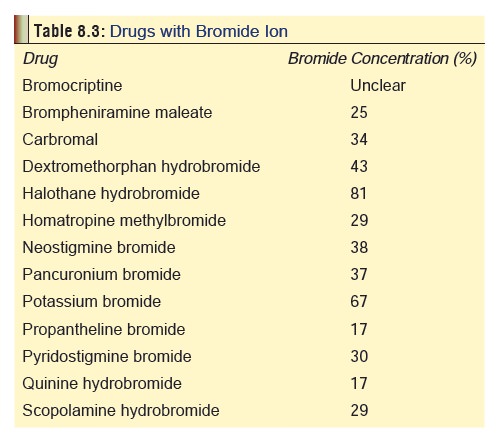 Blood bromide level of 300 mg/100 ml is potentially lethal. Levels greater than 50 to 100 mg/100 ml are usually associated with signs and symptoms of toxicity.

·      Bromine is extremely corrosive to the eyes, skin, bronchial tree and mucous membranes in liquid or vapour form.

·              irritation with nausea and vomiting, which usually prevents absorption of large doses.

·      When therapeutic drugs containing bromides are taken for a long period, chronic poisoning results refered to as bromism:

o     Bromide rash is sometimes seen, which is an acneiform eruption beginning in the face and spreading gradu-ally to the rest of the body (Fig 8.7). It may progress to pustular lesions and ulceration (bromodermatuberosum). 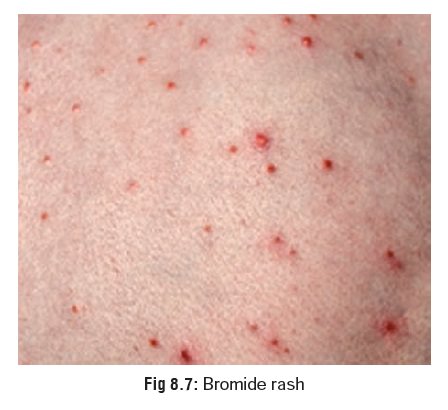 ·      Bromides cross the placenta and may be detected in the milk of nursing mothers. Case reports suggest that prenatal exposure may cause growth retardation, craniofacial abnor-malities and developmental delay.

·      Urine test: Add 5 ml chloroform and a few drops of nitricacid to 10 ml urine. Allow to stand for 3 minutes. A yellow chloroform layer is diagnostic for bromide intoxication.

·              Bromides are often radiopaque. Abdominal x-ray may be helpful in confirming diagnosis of acute ingestion and detecting bezoar formation.

·      Milk or water can be administered as a first-aid measure.

·      Activated charcoal in the usual manner (for organic bromide compounds).

·      Treatment of convulsions with diazepam or phenytoin or babiturates.

·              Oral or intravenous sodium chloride. It promotes excre-tion of bromides. Discontinue when symptoms have improved, and the serum bromide level is less than 100 to 150 mg/dL Administration of diuretics such as furosemide (10 mg IV, 4th or 6th hourly) can improve bromide clearance.

·              If saline administration is contraindicated for any reason, administer ammonium chloride, or undertake haemodialysis.