C. trachomatis are round cells between 0.3 and 1μm in diameter depending on thereplicative stage.

C. trachomatis are round cells between 0.3 and 1μm in diameter depending on thereplicative stage. The envelope surrounding the cells includes a trilaminar outer membrane that contains lipopolysaccharide and proteins similar to those of Gram-negative bacteria. A major difference is that chlamydiae lack the thin peptidoglycan layer between the two membranes. They are obligate intracellular parasites and have not been grown outside eukaryotic cells. The genome of is one of the smallest among prokaryotes and lacks genes for amino acid synthesis. C. trachomatis has ribosomes and is able to carry out the common energy producing pathways of other bacteria.

The replicative cycle of chlamydiae is illustrated in Figure 30 – 1. It involves two forms of the organism: a small, hardy infectious form termed the elementary body (EB), and a larger fragile intracellular replicative form termed the reticulate body (RB). 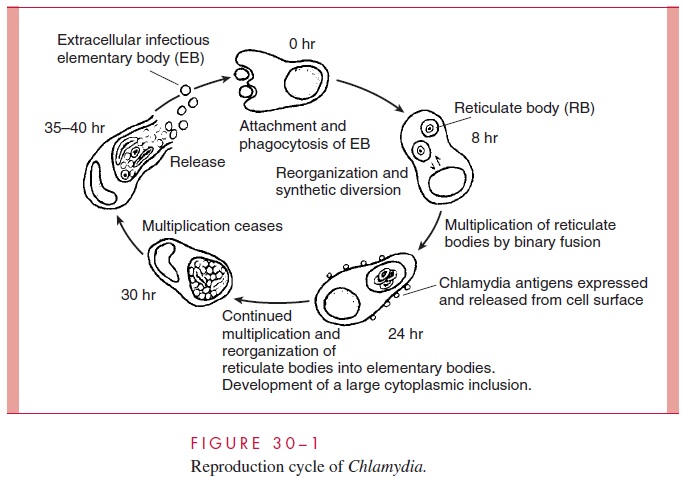 The major difference between the EB and the RB is the extent of cross-linking of the major outer membrane pro-tein (MOMP); EB proteins are highly linked by disulfide bonds, and RBs less so. The EB is a metabolically inert form which neither expends energy nor synthesizes protein. The cycle begins when the EB attaches to unknown receptors on the plasma membrane of susceptible target cells (usually columnar or transitional epithelial cells). It then enters the cell in an en-docytotic vacuole and begins the process of converting to the replicative RB. There is evi-dence that pinocytosis may also occur. Endosomes containing C. trachomatis EBs maintain a near neutral pH and fuse with each other but not with lysosomes. As the RBs increase in number, the endosomal membrane expands by fusing with lipids of the Golgi apparatus eventually forming a large inclusion body. After 24 to 72 hours, the process reverses and the RBs reorganize and condense to yield multiple EBs. The endosomal membrane then either disintegrates or fuses with the host cell membrane, releasing the EBs to infect adjacent cells. The metabolic changes that lead the EB to reorganize into the larger reticulate body are incompletely understood, but involve protein synthesis and modification of MOMPs be-tween the monomeric and cross-linked state. C. trachomatis also inhibits apoptosis of ep-ithelial cells, thus enabling completion of its replicative cycle.