Home | | Essential Clinical Immunology | Characterizing the Heterogeneity of B-CLL by Molecular and Clinical Subtypes
Posted On :  13.07.2017 10:09 am

Characterizing the Heterogeneity of B-CLL by Molecular and Clinical Subtypes

CHARACTERIZING THE HETEROGENEITY OF B-CLL BY MOLECULAR AND CLINICAL SUBTYPES

B-CLL cells are monoclonal B-cell ex-pansions as documented by the expression of monotypic (i.e., either κ or λ) surface Ig and the CD19 antigen; this is in line with the presence of monoclonal rearrange-ments of VDJ genes in the leukemic cells. Most B-CLL cells also express activation markers and, like normal activated B cells, have low levels of surface IgM and IgD. The expression of CD5, usually thought of as a lineage marker, is characteristic of B-CLL cells and should be considered part of their activation status as it can with normal B cells when stimulated through several receptors, including the BCR. The presence of these markers and the degree of activa-tion varies in different B-CLL cases.

B-CLL clones can be further subdivided based on their activation marker expres-sion: in one subgroup, the majority of leu-kemic cells express two activation markers, that is, CD38 and ZAP-70; and in the other, the majority of the cells lack these markers. The two molecules appear to be involved in the regulation of signals delivered by the BCR. The CD38+ ZAP-70+ B-CLL subset is primarily characterized by the presence of more members of the leukemic clone-bearing markers of activated B cells. These activation marker-defined subgroups also differ in their expression of several other molecules up-regulated by cellular activation.

In comparing these two subsetting schemes – the first based on IgVH mutation status and the second on activation markers – CD38+ZAP-70+ B-CLL clones generally use unmutated IgVH genes, whereas CD38−ZAP-70− B-CLL clones mainly use mutated IgVH region genes. Although the subdivision into CD38+ZAP-70+ U-CLL and CD38−ZAP-70− M-CLL is true for the majority of patients, it is not universal since about 25 percent of cases are discordant for the expression of the three markers.

It is interesting to note the correlation between the molecular characterizations of the patients’ clones with the patients’ clinical course. Of major clinical and inves-tigative importance are the observations that IgVH gene mutation status and ZAP-70 and CD38 expression have clinical relevance, since cases in whom the major-ity of the cells express CD38, ZAP-70, and exhibit unmutated IgVH genes have a more aggressive clinical course (Figure 7.4). Correspondingly, those patients whose clones are in the main CD38−ZAP-70− and express mutated IgVH genes generally fare better and have a good prognosis. In those individual cases that are discordant for the expression of these markers, there is nevertheless generally a direct correlation between the number of unfavorable mark-ers and clinical outcome. 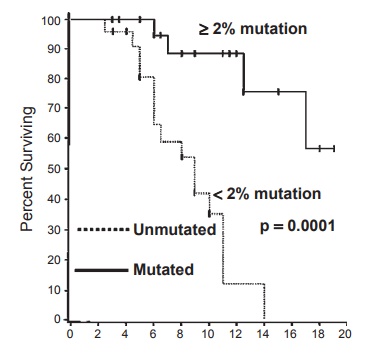 Figure 7.4 IGHV mutation status is a robust prognostic marker in B-cell-type chronic lymphocytic leukemia (B-CLL). CLL cases can be divided into two categories based on the presence of somatic mutations in the expressed IGHV gene. Those patients whose CLL cells have an IgVH gene that differs by greater than 2 percent from its germ line counterpart have a much longer survival time than those patients whose cells use an IgVH gene that differs by less than 2 percent. This distinction has major prognostic value. Reprinted by permission from Damle RN, Wasil T, Fais F, et al. IgV gene mutation status and CD38 expression as novel prognostic indicators in chronic lymphocytic leukemia. Blood. 1999;94:1840–1847.