The enormous diversity of the normal B-cell-antibody repertoire initiates in the bone marrow where B lymphocytes rear-range their immunoglobulin (Ig) variable (V) region gene segments coding for the B cell’s receptor for antigen (BCR).

The enormous diversity of the normal B-cell-antibody repertoire initiates in the bone marrow where B lymphocytes rear-range their immunoglobulin (Ig) variable (V) region gene segments coding for the B cell’s receptor for antigen (BCR) (Figures 7.1 and 7.2). The diversity in the repertoire continues to grow after binding antigen, when the B cell enters a lymphoid follicle and, with the help of other cells and cyto-kines, creates a structure called the germinal center (GC) where the cell proliferates and accumulates somatic mutations in its BCR-encoding genes (Figure 7.3). These muta-tions may produce amino acid changes in the binding site of the BCR, which can improve or create new antigen-binding specificity. Enhanced affinity B cells survive, whereas those having BCRs that either do not bind antigen or bind self-antigens die. The GC reaction usually occurs in secondary lym-phoid follicles with the help of T lympho-cytes. This mutation and selection process can take place in response to bacteria with-out T-cell help in the marginal zones out-side of lymphoid follicles, although in this case, antigenic stimulation does not always induce mutation of IgVH genes.

Figure 7.1 Ig molecules and their genes. Ig molecules can be divided into two fragments, Fab and Fc, by enzymatic digestion; the former fragment engages antigen and the latter fragment mediates effector functions. The two fragments differ in IgV gene composition, with the Fab region, containing the antigen-binding site, being composed predominantly of the Ig variable region gene segments (IGHV, IGHD, and IGHJ) and the Fc region composed completely by an IGHC gene. 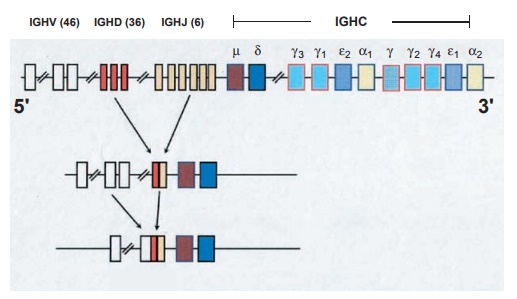 Figure 7.2 IGHV gene rearrangements. To code for a complete Ig molecule containing both Fab and Fc regions, several Ig genes need to be brought together from distinct locations and joined. This is a multistep process involving first the rearrangement of one of thirty-six IGHD gene segments with one of six IGHJ segments. Subsequently this unit is rearranged and combined with one of forty-six IGHV genes. In normal B-cell development, the first rearrangement contains the IGHC µ gene. 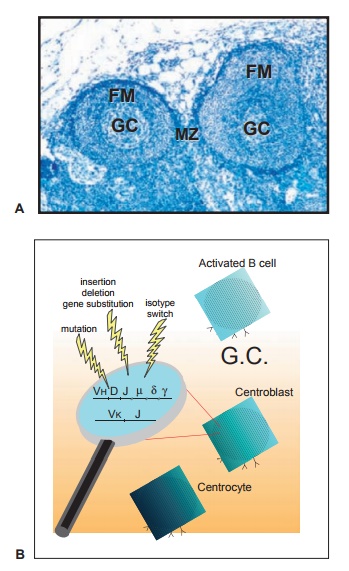 Figure 7.3 Germinal center and the germinal center reaction. A, Photomicrograph of two adjacent germinal centers within a mesenteric lymph node, with germinal center (GC), follicular mantle (FM), and marginal zone (MZ) areas. B, On close inspection of the DNA sequence of the rearranged IgVHDJH, one notices somatic changes that arise during the time the activated B cell resides in the GC. These changes involve predominantly point mutations and isotype class switching, although other less frequent events such as nucleotide deletion or insertion can occur. These changes occur at the centroblast stage of B-cell maturation; at the centrocyte stage, rescue from apoptosis is achieved by antigen binding through the BCR and T-cell interaction.