CNS SLE is an example of an autoim-mune pathology with abnormalities also detected in other organs outside the cen-tral or peripheral nervous system. Over ten years’ follow-up, approximately 25 percent of SLE patients will develop CNS manifes-tations.

CNS SLE is an example of an autoim-mune pathology with abnormalities also detected in other organs outside the cen-tral or peripheral nervous system. Over ten years’ follow-up, approximately 25 percent of SLE patients will develop CNS manifes-tations.

One hypothesis is that the neuropsy-chiatric symptoms of SLE may result from secondary causes. Infarctions may be experienced by patients, felt to be related to antibodies found in SLE, which affect the clotting system, such as circulating lupus anticoagulant or antiphospholipid antibodies (APLAs). Another mechanism may be symptoms secondary to CNS infec-tions such as meningitis or encephalitis. Treatments of SLE require immunosup-pressive medications or steroids, which may predispose patients to these etiolo-gies. Metabolic issues may also present as neuropsychiatric symptoms, such as in the case of uremia secondary to renal involve-ment of SLE.

Lupus cerebritis is the term used to con-vey that the CNS symptomatology is due to the SLE immune process. This broad etiology of neuropsychiatric symptoms may result from a demyelinating pathol-ogy. The symptoms associated with CNS SLE may be diffuse in nature, rather than a focal symptom suggestive of a vascu-lar territory and therefore stroke. These symptoms may include aseptic meningi-tis, headache, chorea, myelopathy, cranial neuropathy, seizures, confusion, and cog-nitive dysfunction. Also felt to be due to

MRI scanning is the clinical tool of choice in investigating the diagnosis of CNS SLE. Infarctions can be identified, as well as diffuse demyelinating disease. Some lesions may resolve on subsequent MRI testing and therefore point away from infarction as the etiology of the clinical manifestation. Infarctions are permanent, whereas demyelination may be reversible. In fact, clinical improvement has been cor-related with resolving lesions, following immunosuppressive therapy on MRI scan-ning, and resolving lesions may actually predict an improved clinical course.

Diffuse CNS SLE is difficult to diagnose and manage. CSF studies, anti-DNA anti-body titers, complement levels, and even imaging may be nonspecific or insensitive. For instance, if a psychosis develops in the SLE patient, it may be due to the SLE, or the use of steroids, a mainstay of the phar-macopoeia in this disease. Depression may also be a manifestation of lupus cerebritis or may be a reactive depression to having the disease. However, missing the diagno-sis of lupus cerebritis or mistreating it car-ries high mortality and morbidity.

In 1986, the first reports of an antibody population to ribosomal P proteins and association to lupus cerebritis came to the literature. This work was based on earlier findings that patients produced antibod-ies that bound to ribosomes. The antigens were found to be phosphoproteins or “P proteins” located on the 60S subunit of ribosomes. These three proteins were labeled P0 (35 kD molecular weight), P1 (19 kD), and P2 (17 kD). These proteins are felt to be involved in protein synthesis; monoclonal antibodies to these proteins inhibit the elongation factors EF-1 and EF-2 to ribosomes and inhibit protein synthe-sis. In addition to being on ribosomes, the P proteins are also on the cell surfaces of diffuse etiology are psychiatric symptoms, such as mood disorders and psychosis. Other neurological symptoms outside the CNS include peripheral neuropathy or mononeuritis multiplex.

The combination of pathological stud-ies and positron emission tomography scanning form a hypothesis: hypoperfu-sion causes a breakdown of the blood-brain barrier. The loss of integrity allows antineuronal antibodies to cross over and ultimately lead to demyelination, similar to theories in MS. The inciting factors that would cause hypoperfusion are unknown. Evidence of a vasculopathy is present in pathological specimens, which dem-onstrate a perivascular accumulation of mononuclear cells, without destruction of the blood vessels. There may also be small infarctions secondary to occlusion of the vessel lumen. APLAs are associated with stroke syndromes and may play a role in the vasculopathy of CNS SLE.

The effects of these APLAs may include a prothrombotic state with coagu-lation pathway abnormalities and cause thromboembolism, stroke, focal seizures, migraines, and multi-infarct dementia. In this setting, the treatment of the disease would be directed more at the antithrom-botic state, with aspirin and consideration of anticoagulation, rather than with ste-roids or immunosuppressants.

Steroids are used only if there is coexist-ing serological evidence of active SLE. Ste-roids may be detrimental in a pure stroke setting, without evidence of active immune disease. Clinically, CNS diffuse vasculitis presents as fever, severe headaches, and confusion, with symptoms that progress rapidly to psychosis, seizures, or coma. Serologically active SLE is detected with elevated anti-dsDNA (double-stranded DNA) and hypocomplementemia.

This antibody is specific to SLE when tested against other autoimmune dis-eases, such as rheumatoid arthritis, sclero-derma, and myositis, but the incidence rate is variable among different studies of SLE patients. The antibody is especially linked to patients with lupus-related psy-chosis (18/20 patients) and severe depres-sion (88 percent). Others in the literature have not been able to confirm these results. Small patient numbers confound the con-clusions of many of these studies.

Ribosomal P protein–targeted antibod-ies do not appear to be synthesized in the CNS and are much more prevalent in the serum of SLE patients. One possible expla-nation is that the antibodies are cell bound in the CNS, as normal neuronal tissue may also express the ribosomal P proteins. Overall, these antibodies might be consid-ered specific for CNS SLE, although not very sensitive. They are present indepen-dently of other SLE-associated antibodies such as to dsDNA and may be helpful in diagnosis if the other marker antibodies have returned to normal.

Other antibodies are being investigated for specificity for CNS SLE. An antineuro-nal antibody was produced against human neuroblastoma cell lines. These were detected in 45 percent of patients with CNS SLE, but on 5 percent of those with SLE but without CNS involvement. Lympho-cytotoxic antibodies have been associated with decreased cognitive function. Cross-reactive antibodies have been found in the sera and CSF of SLE patients that bind to double stranded DNA and excitatory N-methyl-D-aspartate (NMDA) receptors on neurons. Still it is not known if all of these antibody populations are causative of CNS symptoms or produced in reaction to the tissue. 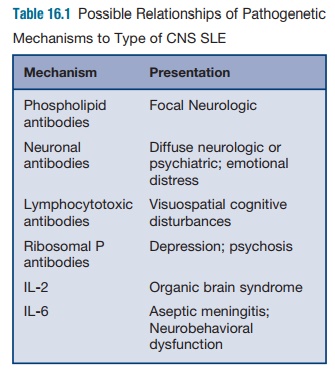 Neurological manifestations can be divided into diffuse symptoms and focal symptoms, which may be correlated with different immune event (Table 16.1). It is generally believed that diffuse symptoms, such as seizures, psychosis, or mental status changes may be associated with anti-lymphocyte antibodies cross-reac-tive with neuronal antigens. Autoimmune antibodies can be directed against neu-rofilaments, phospholipids, glycolipids, glycoproteins, and neuronal cell surface antigens. Widely studied autoantigens are the 32-kD cell surface antigen, the 50–52-kD cell surface antigen, and the 97–98 kD antigen. Patients with lympho-cytotoxic antibodies have been shown to have visuospatial abnormalities and verbal deficits on neuropsychological testing, not detected in those without these antigens. In this setting, the treatment would aim for anti-inflammatory and immunosup-pressive mechanisms, using steroids and possibly cyclophosphamide and plasma-pheresis. Meningitis may present as well and may be secondary to bacterial infec-tions due to immunosuppression. In addi-tion, aseptic meningitis may be caused by medications, such as ibuprofen and immu-nosuppressive medication.

Partial or generalized seizures may also occur in the setting of SLE and gen-erally portend a poor prognosis. Patients are generally treated with anticonvul-sants, and steroids are only added if it is felt that the patient is in an active flare, to prevent potential permanent scarring and a seizure focus.

Although migraine headaches occur frequently in the setting of SLE, a causative effect has not been determined. More seri-ously, patients may have other types of headache, such as pseudotumor cerebri, cerebral venous, or sagittal sinus throm-bosis. This is usually due to a secondary cause of SLE, such as renal dysfunction and a hypercoagulable state. The sudden development of headaches in a previously headache-free patient or neurological symptoms or signs requires rapid work-up and imaging.

More uncommon CNS syndromes occur and may be varied. Movement disorders such as chorea or ataxia point to disease in the basal ganglia or cerebellum. These dis-orders are usually self-limited to two to six weeks and may not require therapy. If they are associated with APLA, anticoagulation may be considered.

Patients may have cranial neuropa-thies causing symptoms such as double vision or hearing loss, trigeminal neural-gia, or dysarthria. Steroids are generally used in these conditions, and if refractory, cyclophosphamide, an immunosuppres-sant medication, is used. When patients present with these symptoms, the question of MS should be ruled out. Both diseases may have optic neuritis, transverse myelitis, or inflammation of the spinal cord (which must be treated aggressively with, at the very least, steroids, and possibly plasma-pheresis and cyclophosphamide for recov-ery), or internuclear ophthalmoplegia, and may have similar MRI scans. Patients who do have similar scans and who have lupus are referred to as having “lupus sclerosis.” APLA in this setting often help with dif-ferentiation of the syndromes. MS should have no peripheral manifestations out-side of the CNS.

Cytokine release may play a role in these pathologies. IL-1, IL-2, IL-6, TNF-α, IFN-α, and IFN-γ have all been demon-strated to be released by CNS microglial cells and astrocytes by LPS stimulation. In the CNS, a cascade of pro-inflammatory cytokines causes events of inflammation similar to peripheral macrophages and monocytes. These cytokines not only medi-ate inflammation but also may directly affect brain function, as there are cytokine receptors on the hypothalamus. Antibod-ies can cause functional dysregulation by blocking the release of neurotransmitters and neuropeptides, resulting in abnormal electrophysiological testing, such as the electroencephalogram.

Animal models have been used to investigate the human disease with mixed success. The MRL/P mice have neurobe-havioral abnormalities such as timidity, phobic behavior, and anxiety. This mani-fests at age 7 to 8 weeks, when autoanti-bodies to brain tissue also present. The pathology demonstrates B lymphocytes around the choroid plexus with MHC class II antigen presentation. This differs from the vasculitis that is more typical of the human SLE syndrome. However, like humans with an exacerbation of SLE, IL-6 is elevated in the CSF and the animal behavior can be significantly improved by treating with immunosuppression and steroids. The clinical improvement is cor-related with a decrease in IL-6 levels in the CSF.

The SLE syndrome of focal events sec-ondary to APLA can also be demonstrated in a mouse model by injecting MRL/pr mice with APLA and anti-neuronal anti-bodies. Antigen derived from limbic brain structures, which also react to human sera, the B2 glycoprotein, causes production of APLA and ischemic events/stokes.

The future of CNS SLE may lie in stem cell transplant. One study of seven patients using chemotherapy followed by autolo-gous stem cell transplantation yielded excellent clinical results at a median follow-up of twenty-five months. The patients had initially suffered from cerebritis, myelitis, vasculitis, or glomerulonephritis and were unresponsive to multiple courses of cyclo-phosphamide. At follow-up, all patients were free of signs of active lupus and sero-logical markers had improved. The theory of the treatment is that when memory T cells are removed from influence, maturation of new lymphocyte progenitor cells occurs without recruiting autoimmune activity.