A device capable of generating artificial pacing impulses and delivering them to heart is known as pacemaker system or pacemaker.

A device capable of generating artificial pacing impulses and delivering them to heart is known as pacemaker system or pacemaker.

· It consists of a pulse generator and electrodes. Sino Atrial node is responsible for the starting of heart beat, hence it is called as Natural Pacemaker.

·                    It is placed inside the body. It may be permanently implanted on the patients whose SA nodes are failed to function or those who suffered from permanent heart block.

·                    Internal leads are connected to the electrodes that directly contact the surface of the myocardium.

·                    The exact location of the pulse generator used in the internal pacemaker system depends on the following factors.

Ø    Type and nature of the electrode used.

Ø    Nature of the cardiac problems.

Ø    Mode of operation of the pacemaker system.

·        There is no external connection for applying power. So the pulse generator should be completely self contained with a battery, which is capable of operating continuously for a specified period.

·                    It consists of an externally placed pulse generator circuit connected to the electrodes placed on the myocardium.

·                    It consists of pulse generators. They are placed m the body and connected normally to the electrode with the help of wires introduced into the right ventricle.

·        Suitable for patients who are suffered by total AV block, atrial arrhythmia.

·        It consists of square wave generator and monostable multivibrator circuit. The period square

Wave generator is given as T.

T can be modified by changing the R,C,R2,R3 values.

Pulse duration is given by

·        If it is fixed in atrium, atrium beat at a fixed rate. If ventricle beat at a different rate, and then it leads to a severe problem. Ventricular fibrillation may be occurred.

·        Suitable for the patients who are suffered by short period of AV block.

·        Electrode placed in the right ventricle of heart. This electrode is used to sense the R-wave.

·        If ventricular contractions are absent, then the pacemaker provides the impulses. This type of pacemaker does not compete with the normal heart activity.

·        Electrode is used to detect the heart rate and it is given to the amplifier and filter circuit. Because heart rate amplitude is very low. Amplifier is used to amplify the cardiac signal. Filter is used to remove unwanted noise signal.

·        Signal is given to refractory period control and timing circuit.

·        R-wave is below the certain level, at that time only, this pacemaker will deliver the pulses.

·        When R-wave is normal , then fixed rate pacemaker block is not in ON condition, so power consumption is reduced.

·        No synchronization between atrial and ventricular contraction.

·        Comparator determines the pacing rate  of the pulse generator.

·        Output is given to second RC network.The pulse width circuit determines the duration of the stimulating pulses.

·        Rate limiting circuit disables the comparator for a short interval and limits the pacing rate.

·        Output circuit provides a voltage pulse to stimulate the heart.

·        Rate slow down circuit shuts off some current to the basic timing to slow down pulse rate during cell depletion.

·        Energy compensation circuit causes the pulse duration unit to increase the battery voltage, when it decreases and it is used to supply the energy to heart. 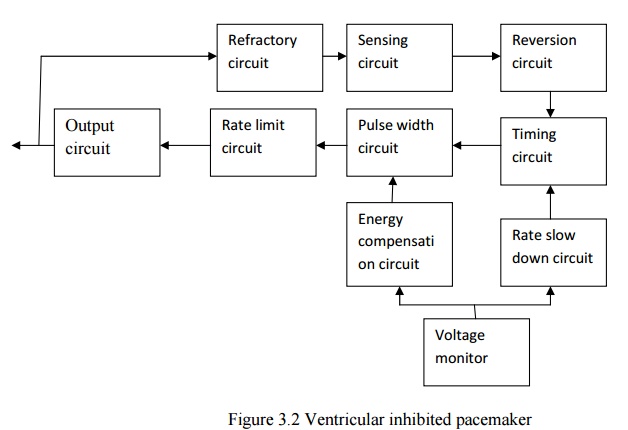 ·        In the absence of R wave the circuit allows the oscillator to produce pacing pulses at its present rate.

·        The inhibited pacemaker allows the heart to pace at its normal rhythm when it is able to do.

·        If the R wave is missing for a preset period of time, then the pacemaker will turn ON and provide the heart a stimulus. Hence it is termed as Demand pacemaker.

·        P wave is sensed and picked by the electrode fixed on the atrium. It is given to the amplifier circuit.

·        Amplifier circuit is used to amplify the P-waveform.

·        The output of the delay circuit given to refractory control and preset multivibrator block.

·        If fixed rate pacemaker is ON, then the output is given to amplifier. The amplified signal is given to ventricle through electrode.

·        Refractory control circuit provide some time delay, because pacemaker pulse is too large.

·        It is used to stimulate both atrial and ventricles. It is a demand pacemaker, so based on the patients need, it provides the impulses.

·        In the modern pacemakers, magnet is placed over the pacemaker on the skin of the patient. This magnet is used to activate the reed switch. This switch, switches the pacemaker into any one of the mode of operation, either to give the impulse for atrial or to ventricle.

METHODS OF STIMULATION OF PACEMAKER

·        External stimulation- Used to restart the normal rhythm of the heart in case of cardiac standstill.

·        Internal stimulation-It prevents normal self triggering of the heart.