To overcome the disadvantage of defibrillation method In 1962,Bernard lawn from Harward school of public health and peter bent of Brigham hospital developed a new method known as dc defibrillation.

·            To overcome the disadvantage of defibrillation method In 1962,Bernard lawn from Harward school of public health and peter bent of Brigham hospital developed a new method known as dc defibrillation.

·            In this dc defibrillation method , a capacitors charged to a high dc voltage and then rapidly discharged through electrodes across the chest of patient.

·            DC method produces some harm to the patient. Depending on the energy setting in the defibrillator , the amount of electrical energy discharged by the capacitor ranges between 100 to 400 joules. Discharge portion is approximately 5 ms.

·            In discharge waveform ,the peak value ofs current is nearly20 A and the wave is monophasic in nature. 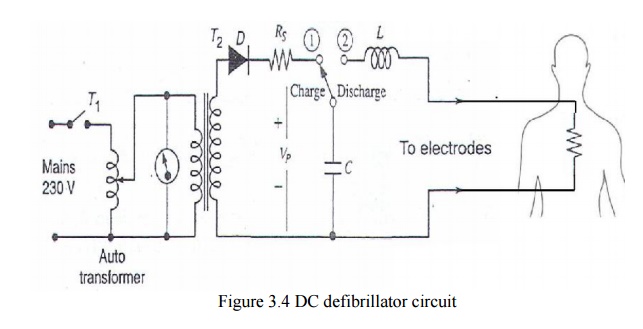 A negative pulse is produced for 1 to 2 ms

The pulse width defined as the time that elapses between the start of the impulse and the moment that the current intensity passes the zero line for the first time and changes direction (5 ms or 2.5 ms) 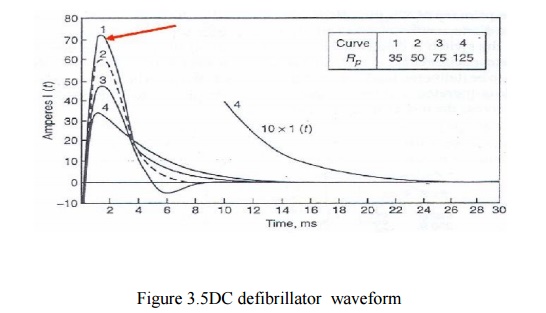 If peak voltage is as high as 6000V is used there is a possibility of damaging myocardium and the chest walls.

·           Effective defibrillation is  achieved in adults with lower level of delivered energy.

·           Effective defibrillation at the desirable lower voltage levels is also possible with the truncated waveform.

·           The amplitude of the waveform is relatively constant, but is varied to get required energy.

·           Large electrodes are used for the proper delivery of large current through the surface of the skin.

·        A unit based on computer technology and designed to analyze the heart rhythm itself, and then advise whether a shock is required.

·        It is designed to be used by lay persons, who require little training.

·        The automatic units also take time (generally 10-20 seconds) to diagnose the rhythm, where a professional could diagnose and treat the condition far quicker with a manual unit.

·        Automated external defibrillators are generally either held by trained personnel who will attend incidents, or are public access units which can be found in places including corporate and government offices, shopping centers, airports, restaurants,

·        AEDS require self-adhesive electrodes instead of hand-held paddles for the two following reasons:

·        The ECG signal acquired from self-adhesive electrodes usually contains less noise and has higherquality ⇒ allows faster and more accurate analysis of the ECG ⇒ better shock decisions. Hands off‖ defibrillation is a safer procedure for the operator, especially if the operator has little or no training. 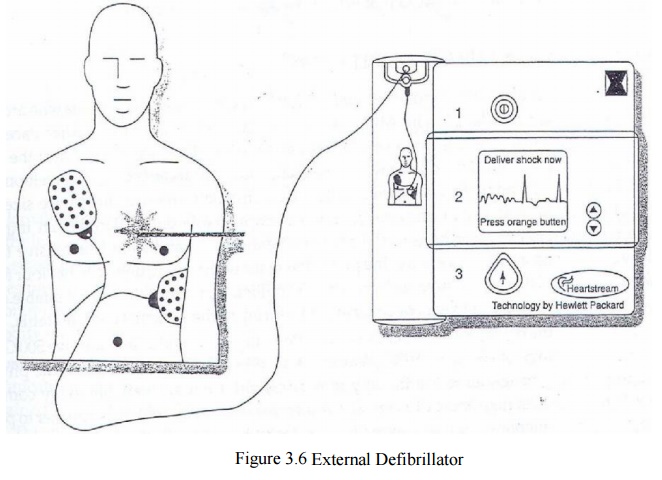 ·        Synchronization means, synchronized the working of the heart with the pacemaker. Synchronized DC defibrillator allows the electric shock at the right point on the ECG of the patient.

·        Electric shock is delivered approximately 20 to 30 ms after the peak of R wave of patients ECG.

·  ECG waveform is traced from the patient.

R-wave in the output of ECG amplifier triggers the time delay circuit .It gives the delay of 30 ms approximately. After that, defibrillator circuit is switched ON. So that, the

capacitor    discharges the electric shock to the patient’s heart.

·  The moment at which electric shock occurs is noted by producing the marker pulse on monitoring display.

·  This type of circuit is preferred in cardiac emergencies

·    The sudden cardiac arrest can be treated using a defibrillator and 80 percent of the patients will be cured from the cardiac arrest if the is given within one minute of the attack.

·                       To prevent the person applying the electrodes from accidential electric shock specially insulated handles are provided in the paddles.

·                       There is a possibility of someone accidentally stepping on the foot switch in the excitement of an emergency before the paddles are placed. So thumb switches are mostly preferred.

·                       Most of the defibrillators include a watt second meter to inducate the amount of energy stored in the capacitor before discharge.