Payment cards are plastic cards that enable cashless payments. They are simple embossed plastic card that authenticates the card holder on behalf of card issuing company, which allows the user to make use of various financial services. More than 90% of online payments are card based payments, at the same time other e-payment methods are also gaining importance now-a-days.

Based on the transaction settlement method there are three widely used card based payment systems. They are

Credit card is an electronic payment system normally used for retail transactions. A credit card enables the bearer to buy goods or services from a vendor, based on the cardholder’s promise to the card issuer to payback the value later with an agreed interest. Every credit card account has a purchase limit set by the issuing bank or the firm. A credit card is different from a debit card where the credit card issuer lends money to customer instead of deducting it from customer’s bank account instantly.

The term credit card was first mentioned in 1887 in the sci -fi novel “Looking Backward” by Edward Bellamy. The modern credit cards concept was born in the U.S.A, in the 1920s, when private companies began to issue cards to enable their customers to purchase goods on credit within their own premises.

In February 1950, Frank McNamara and Ralph Schneider created The Diners Club card which was made of paper-cardboard. Initially The card was accepted in only 27 restaurants and was used only by friends and acquaintances of the two founders (approximately 200 people). Later it was enhanced and accepted worldwide. From 1955, the card was made of plastic. The Diners Club still exists today under the name Diners Club International. 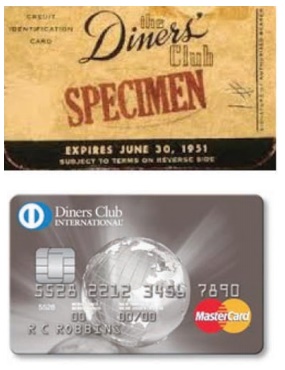 ● Most credit cards are accepted worldwide.

● It is not necessary to pay physical money at the time of purchase. The customer gets an extra period to pay the purchase.

● Depending on the card, there is no need to pay annuity.

● Allows purchases over the Internet in installments.

● Some issuers allows “round up” the purchase price and pay the difference in cash to make the transactions easy.

1. Bearer: The holder of the credit card account who is responsible for payment of invoices in full (transactor) or a portion of the balance (revolver) the rest accrues interest and carried forward.

2. Merchant: Storekeeper or vendor who sell or providing service, receiving payment made by its customers through the credit card.

3. Acquirer: Merchant’s bank that is responsible for receiving payment on behalf of merchant send authorization requests to the issuing bank through the appropriate channels.

4. Credit Card Network: It acts as the intermediate between the banks. The Company responsible for communicating the transaction between the acquirer and the credit card issuer. These entities operate the networks that process credit card payments worldwide and levy interchange fees. E.g. Visa, MasterCard, Rupay

5. Issuer: Bearer’s bank, that issue the credit card, set limit of purchases, decides the approval of transactions, issue invoices for payment, charges the holders in case of default and offer card-linked products such as insurance, additional cards and rewards plan. See Figure 16.2

Anatomy of a credit card

All Payment cards (including debit card) are usually plastic cards of size 85.60 mm width × 53.98 mm height, rounded corners with a radius of 2.88 mm to 3.48 mm and thickness of 0.76 mm. These standards dimensions are maintained universally in accordance with ISO/IEC 7810#ID-1. See Figure 16.3

1. Publisher: Emblem of the issuing bank (along with the sub category or scheme if any)

● The next 5 digits uniquely identifies the issuing organization.

● The last digit is a check digit (based to the Luhn algorithm).

3. Name of the cardholder: It is visibly embossed on the front side (additionally stored on the magnetic stripe) some cards like gift cards do not hold any name.

4. EMV chip: It is integrated chip in addition to magnetic stripe to store cardholder’s information. EMV stands for Europay, MasterCard, Visa. These three names correspond to the names of the companies which are responsible to develop this technology. It is categorized into Chip-and-Signature and Chip-and-PIN.

5. RFID symbol: It is four curved lines radiating rightwards similar to a tilted Wi-Fi symbol. It indicates that it is a contactless smartcard.

6. Expiration month and year: It is visible on the front side (also stored on the magnetic stripe or chip). The card is valid until the last day of the month printed on it.

8. Magnetic stripe: It is an iron based magnetic material containing encrypted data about the card holder and account number.

9. Hologram: Hologram is a security feature that prevents duplication. It is a 3-dimentional image formed by interference of light beams.

10. Signature: It is cardholder’s signature at the back of the card, used as an attempt to identify cardholder’s identity. It also holds the last 4 digits of card number.

Apart from the these mentioned each credit card may also holds issuer’s disclaimer, address and phone number.

Debit Card is an electronic payment card where the transaction amount is deducted directly from the card holder’s bank account upon authorization. Generally, debit cards function as ATM cards and act as a substitute for cash The way of using debit cards and credit cards is generally the same but unlike credit cards, payments using a debit card are immediately transferred from the cardholder’s designated bank account, instead of them paying the money back at a later with added interest. In modern era the use of debit cards has become so widespread.

The debit card and credit card are identical in their physical properties. It is difficult to differentiate two by their appearance unless they have the term credit or debit imprinted.

Currently there are three ways of processing debit card transactions:

Stored value card is a type of debit card that is pre-loaded with certain amount(value), with which a payment is made. It is a card that has default monetary value onto it. The card may be disposed when the value is used, or recharged to use it again. The major advantage of stored value card is that customers don’t need to have a bank account to get prepaid cards. See Figure 16.4 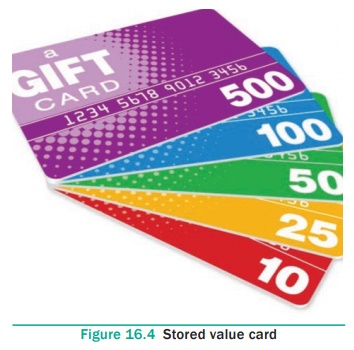 There are two varieties for stored value card.

In closed loop cards, money is metaphorically stored on the card in the form of binary-coded data. Closed loop cards are issued by a specific merchant or merchant group and can only be used to make purchases from specific place. e.g. chennai metro rail travel card.

Open loop cards can be used to make debit transaction at variety of retailers. It is also called as prepaid-debit cards. It can be used anywhere the branded cards are accepted. e.g. Visa gift cards.

In some countries it is legal for anyone to enter or leave the country with money that is stored on cards, unlike carrying cash in high amounts which is believed a form of money laundering. 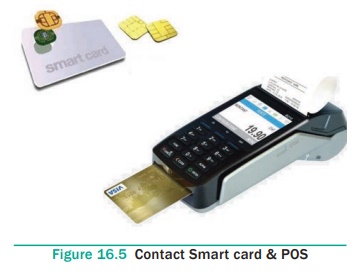 Contact smart cards have a contact area of approximately 1 square centimeter, comprising several gold-plated contact pads. These pads provide electrical connectivity only when inserted into a reader, which is also used as a communications medium between the smart card and a host. e.g. a point of sale terminal(POS).

2. Contactless smart cards Contactless smart card is empowered by RF induction technology. Unlike contact smart cards, these cards require only near proximity to an antenna to communicate. Smart cards, whether they are contact or contactless cards do not have an internal power source. Instead, they use an inductor to capture some of the interrupting radio-frequency signal, rectify it and power the card’s processes. See Figure 16.6