Candidiasis occurs in localized and disseminated forms. Localized disease is seen as erythema and white plaques in moist skin folds (diaper rash) or on mucosal sur-faces (oral thrush). It may also cause the itching and thick white discharge of vul-vovaginitis. Deep tissue and disseminated disease are limited almost exclusively to the immunocompromised. Diffuse pneumonia and urinary tract involvement are especially common.

C. albicans is a common member of the oropharyngeal, gastrointestinal, and female geni-tal flora. Infections are endogenous except in cases of direct mucosal contact with lesions in others (eg, through sexual intercourse). Although C. albicans is a common cause of nosocomial infections, the fungi are also derived more frequently from the patient’s own flora than from cross-infection. Invasive procedures and indwelling devices may provide the portal of entry, and the number of available Candida may be enhanced by the used of antibacterial agents.

Because C. albicans is regularly present on mucosal surfaces, disease implies a change in the organism, the host, or both. The change from the yeast to the hyphal form is strongly associated with enhanced pathogenic potential of C. albicans. In histologic preparations, hyphae are seen only when Candida starts to invade, either superficially or in deep tissues (see Fig 45–4). This switch can be controlled in vitro by the manipulation of environmen-tal conditions, but it is not known what triggers the change in human disease. What is known is that the morphologic change is also associated with the appearance of a number factors associated with tissue adherence and digestion. 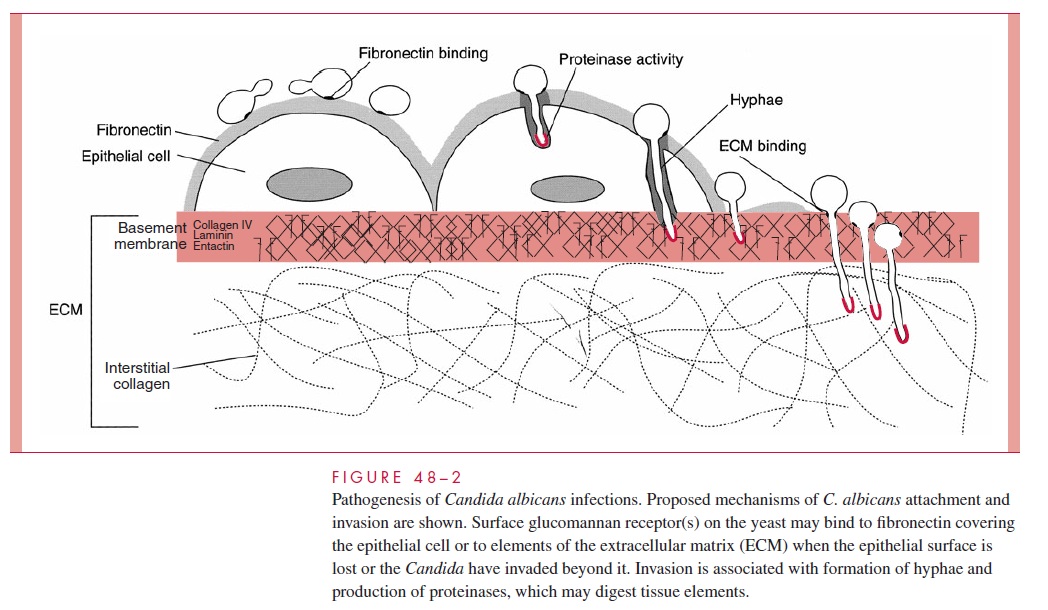 C. albicans hyphae have the capacity to form strong attachments to human epithe-lial cells. A mediator of this binding may be a surface hyphal wall protein (Hwp1), which is found only on the surface of germ tubes and hyphae. This protein has amino acid sequences similar to those in the substrates of mammalian keratinocyte transami-nases, which form cross-links between squamous epithelial specific proteins. This novel pathogenic strategy makes use of host enzymes to bind the pathogen to epithe-lial cells. Other mannoproteins that have similarities to vertebrate integrins may also mediate binding to components of the extracellular matrix (ECM), such as fi-bronectin, collagen, and laminin. Hyphae also secrete proteinases and phospholipases that are able to digest epithelial cells and probably facilitate invasion (Figs 48–2 and 48–3). There is also evidence that C. albicans may be able to induce its own phagocy-tosis by endothelial cells. Taken together, these factors represent a rich armamentar-ium of virulence factors all seemingly linked to the change from yeast to hyphal growth. 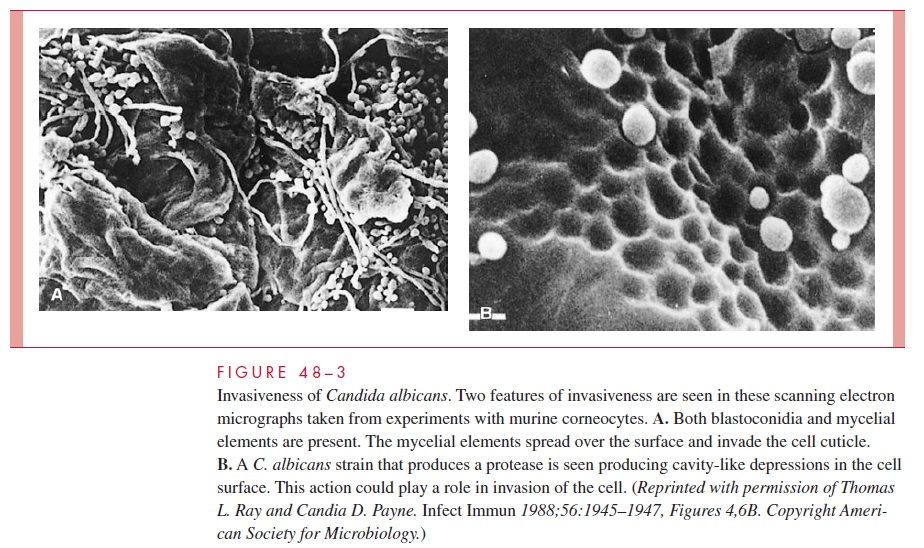 C. albicans has protein surface receptors that bind the C3 component of complementin a manner similar to that of the receptors on neutrophils. C3 bound to the candidal sur-face by these receptors is thus oriented in a fashion that makes it unavailable for opsonization. Enhanced production of these receptors under various conditions, for exam-ple, elevated glucose concentration, is associated with resistance to phagocytosis by neutrophils.

Factors that allow C. albicans to increase its relative proportion of the flora (antibac-terial therapy), that compromise the general immune capacity of the host (leukopenia or corticosteroid therapy), or that interfere with T-lymphocyte function (acquired immuno-deficiency syndrome; AIDS) are often associated with local and invasive infection. The disruptions of the mucosa associated with chronic disease and their treatments (in-dwelling devices, cancer chemotherapy) may enhance the invasion process by exposingCandida binding sites in the ECM. Diabetes mellitus also predisposes to C. albicans in-fection, possibly because of the known greater production of the surface mannoproteins in the presence of high glucose concentrations.

Both humoral immunity and cell-mediated immunity are important in defense against Can-dida infections. Neutrophils are the primary first-line defense. Yeast forms of C. albicans are readily phagocytosed and killed when opsonized by antibody and complement. In the absence of specific antibody, the process is less efficient, but a naturally occurring antiman-nan IgG is able to activate the classical complement pathway and facilitate the alternate pathway. Hyphal forms may be too large to be ingested by polymorphonuclear neutrophils (PMNs), but they can still kill the fungi by attaching to the hyphae and discharging metabo-lites generated by the oxidative metabolic burst. A deficit in neutrophils or neutrophilic function is the most common correlate of serious C. albicans infection.

The association of chronic mucocutaneous candidiasis  with a number of T-lymphocyte immunodeficiencies emphasizes the importance of this arm of the immune system in defense against Candida infections. The increased frequency of oral and vaginal candidiasis in AIDS patients suggests that even superficial infections involve T-lymphocyte–mediated immune responses (cell-mediated immunity [CMI]). In animal studies, Candida cell wall mannan has been shown to play an immunoregulatory function by downregulating cell-mediated immune responses. A possible explanation for the asso-ciation between AIDS and Candida infection is the upregulation of CD4 receptors on monocytes by Candida products. As with other fungi, cytokine activation of macrophages enhances their ability to kill C. albicans. A favorable outcome appears to require the proper balance between TH1- and TH2-mediated cytokine responses. The cytokines asso-ciated with TH1 (interleukin-2 [IL-2], IL-12, interferon- γ, tumor necrosis factor- ) are correlated with enhanced resistance against infection where TH2 responses (IL-4, IL-6, and IL-10) are associated with chronic disease.