The Diagnostic and Statistical Manual of Mental Disorders, Fourth Edition, Text Revision (DSM-IV-TR) defines caffeine in-toxication as a set of symptoms that develop during or shortly af-ter caffeine use.

The diagnosis of caffeine intoxication is based on the DSM-IV TR criteria of substance intoxication. Specifically, this disorder is diagnosed after the consumption of 250 mg of caffeine. Table 36.1 indicates the approximate caffeine content of numerous foods. This diagnosis is entertained when at least five of the following 12 signs are present and they produce significant distress not due to a general medical condition:

In a person who regularly consumes caffeine, tolerance may oc-cur to the acute effects of caffeine. Thus a sensitive person with no tolerance to caffeine might have signs and symptoms of caf-feine intoxication in response to a relatively low dose of caffeine (such as 100 mg, the amount found in a typical cup of brewed coffee) (Table 36.1), whereas another person with a high daily consumption of caffeine would show no evidence of intoxication with a similar dose. 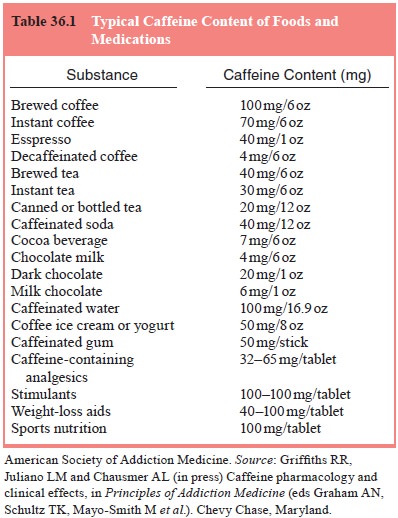 Although caffeine intoxication can occur in the context of ha-bitual chronic consumption of high doses, probably most often it occurs after inadvertent overdosing. Examples include over-dosing of intravenous caffeine to children in medical settings (e.g., for respiratory stimulating effects), excessive caffeine consumption in tablet form by students who fail to appreciate the dose being ingested (e.g., to study through the night), and the person who unknowingly consumes a highly concentrated form of caffeine (e.g., caffeinated coffee brewed with caffeine-containing water to create an especially high dose of caffeine in the coffee).

The principal cellular site of action of caffeine is the adenosine receptor, where caffeine functions as an antagonist. Adenos-ine produces a wide variety of physiological effects, including decreasing spontaneous electrical activity in brain, inhibiting neurotransmitter release in brain, decreasing spontaneous and operant motor activity, dilating central vasculature, producing antidiuresis, inhibiting renin release, and inhibiting gastric se-cretion and lipolysis. As an antagonist of adenosine many of caf-feine’s actions are opposite to those produced by adenosine (e.g., central nervous system stimulation, decreased cerebral blood flow, increased renin release and diuresis, increased gastric se-cretions and stimulation of respiration).

The primary features of caffeine intoxication can be found in the diagnostic criteria from DSM-IV. The diagnostic decision tree for caffeine intoxication disorder, caffeine-induced anxi-ety disorder and caffeine-induced sleep disorder is shown in Figure 36.1. The most common symptoms reported in decreasing order of frequency are frequent urination, restlessness, insomnia, nervousness and excitement (all which were at rates greater than 20%). In addition, nearly 25% of people report heart pounding in response to high caffeine use (although this is not one of the DSM-IV criteria). 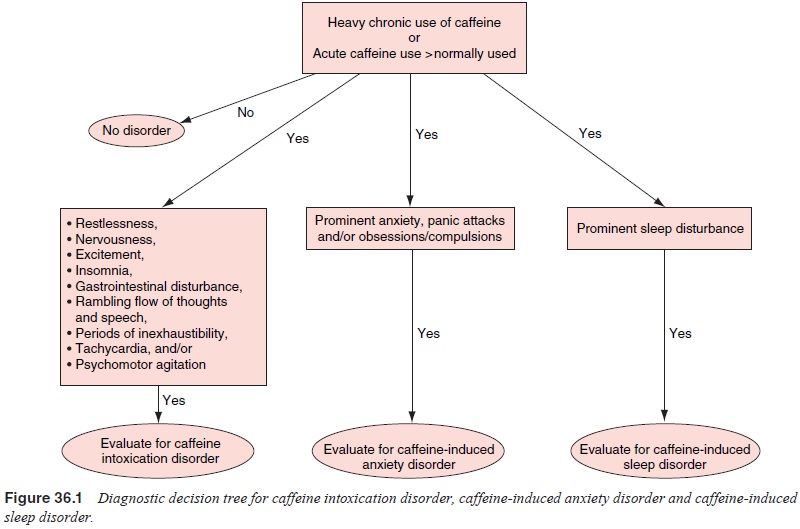 The diagnosis of caffeine intoxication is based on the history and clinical presentation of the patient. Ideally, the extent of caffeine exposure can also be assessed by a serum or saliva assay of the caffeine level. In the past, caffeine use has often been overlooked in patients presenting with symptoms consistent with a caffeine use disorder. However, it may be that there is presently a greater awareness of the deleterious effects of caffeine, making psychia-trists more sensitive to the inclusion of caffeine in a differen-tial diagnosis (see Table 36.2), and patients more aware of the possible role of excessive caffeine in somatic and psychological symptoms.

In the patient who is not tolerant to caffeine, acute caffeine inges-tion producing caffeine intoxication is a time-limited condition that will rapidly resolve with cessation of caffeine use, consistent with the relatively short half-life of caffeine (3–6 hours).