The most important feature of C++ is the “Class”. It is significance is highlighted by the fact that Bjarne Stroustrup initially gave the name 'C with classes'.

The most important feature of C++ is the “Class”. It is significance is highlighted by the fact that Bjarne Stroustrup initially gave the name 'C with classes'. C++ offers classes, which provide the four features commonly present in OOP languages: Abstraction, Encapsulation, Inheritance, and Polymorphism.

Class is a way to bind the data and its associated functions together. Classes are needed to represent real world entities that not only have data type properties but also have associated operations. It is used to create user defined data type

Declaration of a class

The only difference between structure and class is the members of structure are by default public where as it is private in class.

The General Form of a class definition

• The class body contains the declaration of its members (Data member and Member functions).

Data hiding is one of the important features of Object Oriented Programming which allows preventing the functions of a program to access directly the internal representation of a class type. The access restriction to the class members is specified by public, private, and protected sections within the class body. The keywords public, private, and protected are called access specifiers. The default access specifier for members is private.

in child classes which are called derived classes

A public member is accessible from anywhere outside the class but within a program.You can set and get the value of public data members even without using any member function.

A private member cannot be accessed from outside the class. Only the class member functions can access private members.By default all the members of a class would be private.

A protected member is very similar to a private member but it Provides one additional benefit that they can be accessed (inherited classes). 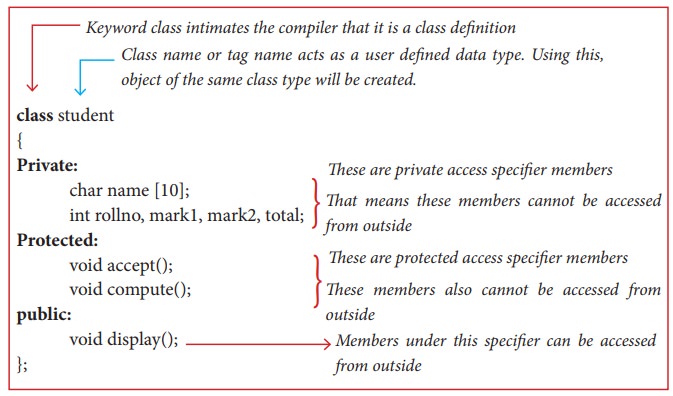 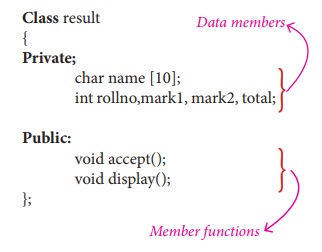 Defining methods of a class

Without defining the methods (functions), class definition will become incomplete. The member functions of a class can be defined in two ways.

(1) Inside the class definition

(2) Outside the class definition

(1) Inside the class definition

If a function is inline, the compiler places a copy of the code of that function at each point where the function is called at compile time.

(2) Outside the class definition 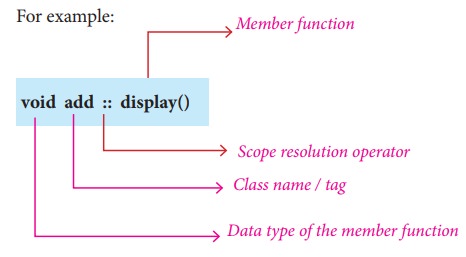 Absence of access specifier means that members are private by default..

Declaring a member function having many statements, looping construct, switch or goto statement as inline is not advisable.