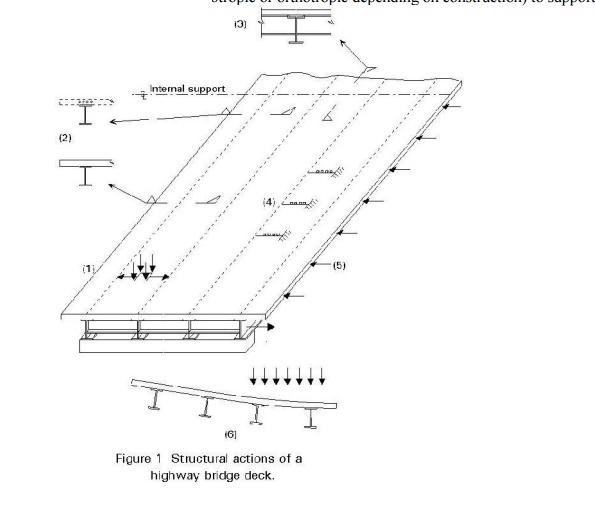 The principal function of a bridge deck is to provide support to local vertical loads (from highway traffic, railway or pedestrians) and transmit these loads to the primary superstructure of the bridge, Figure 1(1).

The principal function of a bridge deck is to provide support to local vertical loads (from highway traffic, railway or pedestrians) and transmit these loads to the primary superstructure of the bridge, Figure 1(1). As a result of its function, the deck will be continuous along the bridge span and (apart from some railway bridges) continuous across the span. As a result of this continuity, it will act as a plate (isotropic or orthotropic depending on construction) to support cal patch.

Continuity ensures that whether or not it has been designed to do so, it will participate in the overall structural action of the superstructure.

The overall structural actions may include:

·        Contributing to the top flange of cross girders at supports and, where present in twin girder and cross girder structures, throughout the span, Figure 1(3).

It may be necessary to take account of these combined actions when verifying the design of the deck. This is most likely to be the case when there are significant stresses from the overall structural actions in the same direction as the maximum bending moments from local deck actions, e.g. in structures with cross girders where the direction of maximum moment is along the bridge.

The passage of each wheel load causes a complete cycle of local bending stresses. The number of significant stress cycles is, therefore, very much higher for the deck than for the remainder of the superstructure. In addition, some of the actions of the deck arising from its participation in the overall behaviour are subject to full reversal;

an example is the transverse distribution of vertical load between girders. For both these reasons, fatigue is more likely to govern the design of the bridge deck than the remainder of the superstructure.