With this procedure the undersurface of the spec-imen is composed only of fascial planes with occasional shreds of pectoralis major muscles attached. The anterior surface usually contains an island of skin and nipple with the subcutaneous tissue extending beyond it. Nevertheless, com-plete axillary dissection typically is included within the specimen, forming an elongated tail at one end of the otherwise elliptical specimen. Most mastectomies are performed after a core needle biopsy has established a diagnosis of in-vasive carcinoma or after a lumpectomy has not been successful in completely removing an in situ and/or invasive carcinoma.

First, orient the specimen to localize the four quadrants of the breast correctly. This step should not be difficult if you use the axillary contents, the sidedness of the breast, and the surgeon’s description of the location of the tumor. Once the specimen has been oriented, place a safety pin in the corner of the upper outer quadrant. This practice helps you to reorient the specimen quickly in case you have to return to the speci-men. Weigh and measure the specimen; then de-scribe the skin, nipple, and any biopsy sites seen. The axillary tail can be removed now for later examination. Next, take the time to palpate the specimen. Localize the biopsy scar, the biopsy cavity, and any masses. Examine the deep surface of the specimen for attached fragments of skeletal muscle, and ink it so perpendicular sections can be obtained to evaluate the deep soft tissue margin. Also ink the exposed breast tissue lateral to the skin ellipse on the anterior surface of the specimen (preferably with ink of a different color). These constitute the anterior margins. Hence, all surfaces except for the skin and axillary tail should be inked. 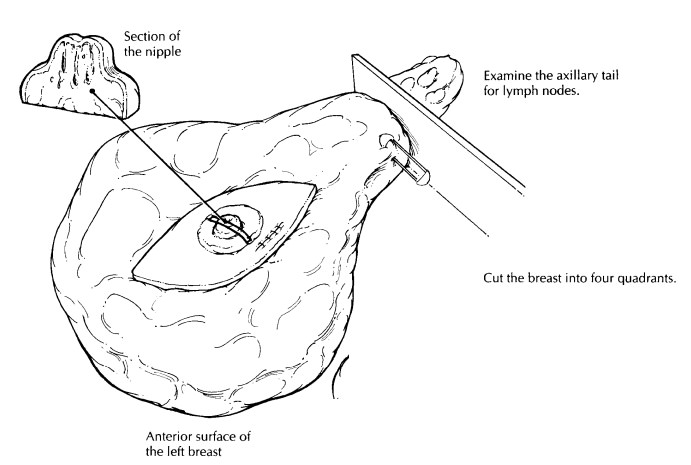 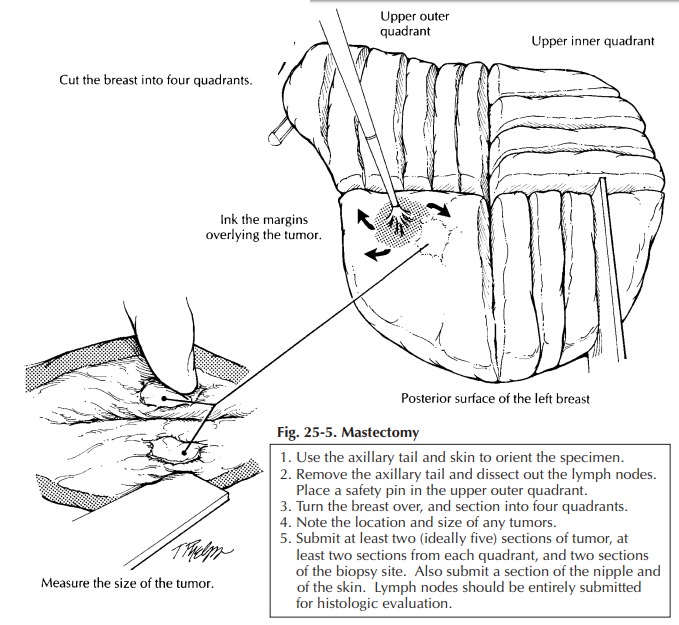 The breast can then be placed skin surface down on a cutting board and sectioned. As illus-trated (Figure 25-5), use the nipple to center the specimen; then with two long perpendicular cuts section the breast into four quadrants. Each quad-rant can be further sectioned, each in its own direction. These cuts should not go all the way through the specimen but, instead, should leave the pieces attached together by a rim of unsec-tioned breast or skin. This procedure not only helps orient the specimen in a clinically relevant way, it helps remind you to document in which quadrant(s) the lesion lies The gross dictation should include

(1) the over-all dimensions and the weight of the specimen;

the overall dimensions of the skin surface;

(2)       the presence or absence of a biopsy scar and biopsy cavity and their relation to the nipple;

(3)       the presence of any retraction or ulceration of the nipple and/or surrounding skin; (5) the pres-ence or absence of muscle on the undersurface of the specimen; (6) the size and gross appearance ofthe tumor including the quadrant of the breast in which it is localized; and (7) the distance of thetumor to the deep and anterior margins. At least two and ideally five sections of the primary lesion should be submitted for histologic examination. Two sections can then be submitted from each of the remaining breast quadrants. If the mastec-tomy was performed as a prophylactic procedure in a patient with an in situ carcinoma, submit at least three sections from each quadrant; also submit any suspicious lesions in their entirety. Submit a section of the nipple and one of the skin in the area of the prior biopsy site.

Finally, dissect all lymph nodes from the axillary contents. If lymph nodes are separated into levels I, II, and III by their relationship to the pectoralis minor muscle (lateral, below, and medial to it, respectively), maintain this orienta-tion. When dealing with axillary lymph nodes in patients with carcinoma of the breast, it is particularly important to identify and evaluate each lymph node and to submit lymph nodes that are grossly negative for tumor in their entirety. Grossly positive nodes do not need to be submitted in their entirety. The size of the tumor in the grossly involved lymph node should be documented in your gross report.