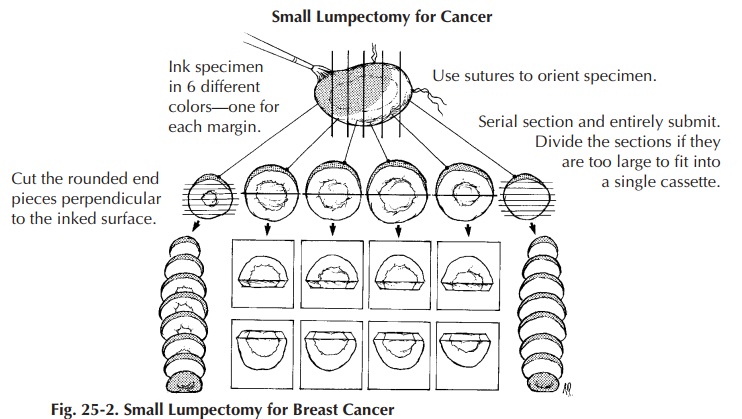 A lumpectomy specimen from a palpable mass that is grossly benign should be measured, inked, and serially sectioned perpendicular to the clos-est palpable margin. Inspect the cut surface and record the size and appearance of the lesion as well as its distance from the margins. Sequen-tially submit the entire lumpectomy specimen in up to 10 cassettes. Be sure that your sections show the border of the lesion with the surrounding breast tissue (important for distinguishing fibro-adenoma from phyllodes tumors), and take perpendicular sections from the lesion to the margins. If the margins are designated, be sure to obtain a section perpendicular to each of the six margins. Cost-effective strategies for handling large lumpectomy specimens have also been proposed. Schnitt et al.11,12 suggested submit-ting a maximum of 10 initial sections of the fibrous tissue in these cases, as carcinoma and atypical hyperplasia are unlikely to be found in the fatty tissue alone.

Lumpectomy biopsies for grossly identifiable cancers are usually brought to the surgical pathology laboratory with some indication of orientation provided by the surgeon. Frequently, but not universally, a short stitch is used to desig-nate the superior aspect of the specimen and a long stitch to designate the lateral aspect of the specimen. From these two landmarks you can then determine the inferior, medial, anterior, and posterior margins. As illustrated, these margins are easier to conceptualize if you think of the specimen as a cube. After orienting the speci-men, measure it, ink it, and obtain one or two perpendicular sections from each of the six mar-gins (superior, inferior, medial, lateral, superfi-cial, deep). Serially section the specimen at 2- to 3-mm intervals. Note the size of the tumor and the distance to each of the margins. Obtain two to five sections of the tumor. If a portion of skin is present, it should also be sampled for histologic examination. If the lumpectomy specimen is rela-tively small, submit it entirely (Figure 25-2). For large lumpectomy specimens, where the entire specimen cannot be submitted in 20 cassettes, submit representative sections (Figure 25-3). 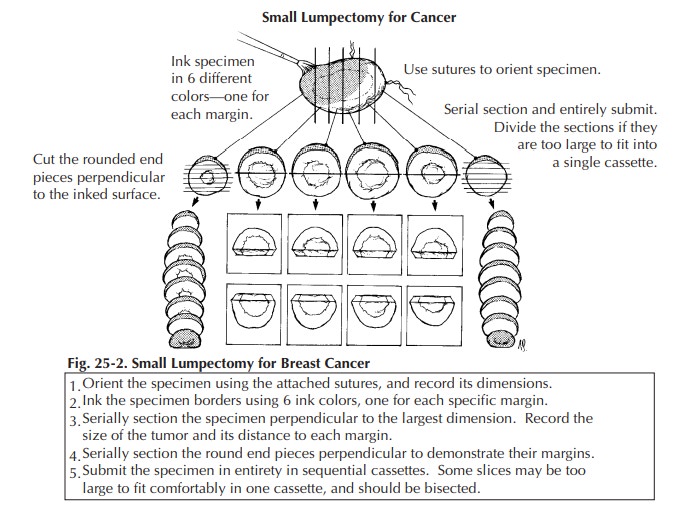 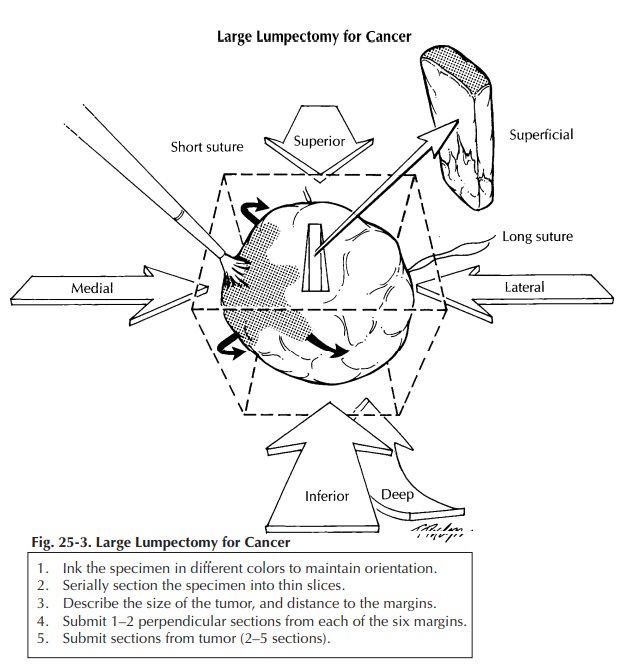 Sometimes the surgeon separately submits addi-tional (revised) margins for one or all six of the lumpectomy surfaces. Usually these specimens appear as a strip of tissue with a stitch on one face marking the new margin. The opposite sur-face, which would face the lumpectomy speci-men, often contains fresh blood and is not a true margin. Ink the surface containing the stitch, obtain serial sections perpendicular to the ink, and submit all of the sections for microscopic examination (Figure 25-4). Do not ink the oppo-site surface; otherwise, it may be impossible to tell which is the true margin. 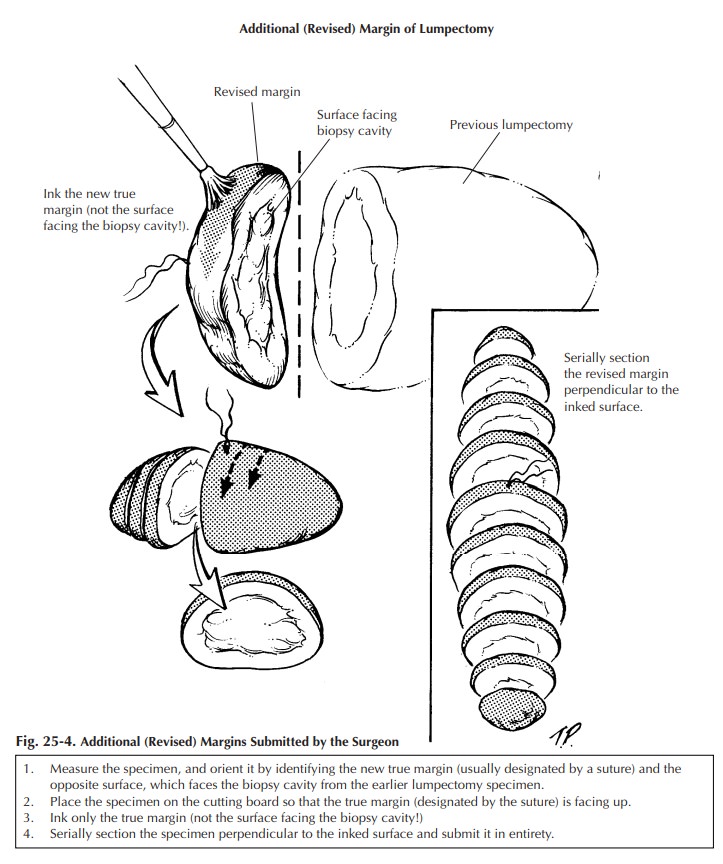 Re-excision lumpectomies are generally per-formed because a positive margin was identified during a prior excision. Therefore, specimen sam-pling should focus on the biopsy cavity to docu-ment the presence of residual disease and on the new specimen margins to ensure the adequacy of tumor removal during the re-excision. Try to submit re-excision specimens in their entirety if they can be submitted in fewer than 10 cassettes. If the biopsy cavity appears grossly benign, two sections per centimeter of greatest specimen diameter is probably adequate.