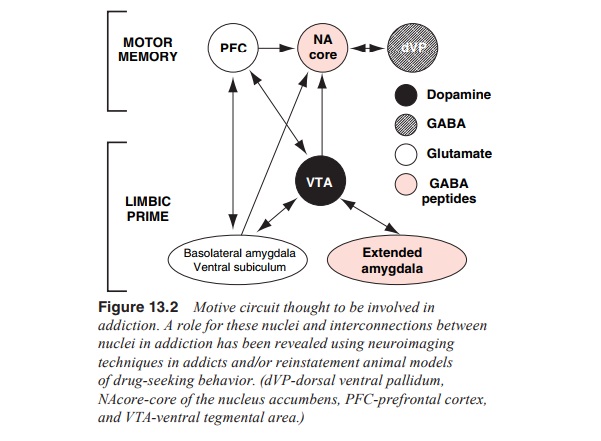 Figure 13.2 will be used as a guide and outlines the nuclei and the interconnections between these nuclei, which will be discussed.

Figure 13.2 will be used as a guide and outlines the nuclei and the interconnections between these nuclei, which will be discussed. This circuit has been previously characterized as the motive circuit and contains brain nuclei that are considered critical substrates for drug reward and the devel-opment of addiction (as outlined above), such as the dopamine neurons in the ventral tegmental area and projections to the nu-cleus accumbens. In addition, the circuit contains prefrontal cor-tical and allocortical brain regions now known to be critical for the expression of behaviors commonly associated with addiction, such as drug craving. 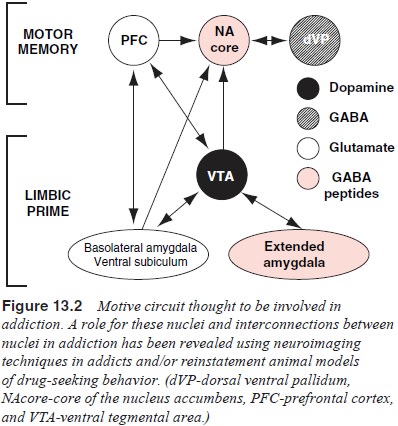 The majority of our recent understanding of how the motive cir-cuit (in Figure 13.2) is involved in addiction is derived from neu-roimaging studies in human addicts and animal studies employ-ing the reinstatement model of drug craving. The neuroimaging studies typically involve functional imaging of brain activity in addicts that are exposed to evocative stimuli, such as an injection of a low dose of drug or stimuli (e.g., the drug paraphernalia) that the addict associates with drug taking (Volkow and Fowler, 2000).

The Motive Circuit as a Substrate of Addiction

The circuit illustrated in Figure 13.2 consists of interconnected nuclei that have been shown to be involved in the processing of drug reinforcement and in initiating behaviors to obtain such reinforcement. Neuroimaging studies have clearly identified cortical circuits that are activated by drug-associated stimuli in addicts. This includes areas of the prefrontal cortex, such as the anterior cingulate and the ventral orbital cortex, as well as some allocortical regions including the amygdala (Pierce and Kalivas, 1997; Volkow and Fowler, 2000; Grant et al., 1996; Childress et al., 1999; Porrino and Lyons, 2000). In addition, some neuroimaging studies have revealed involvement of the ventral striatum (including the nucleus accumbens), espe-cially in response to a small challenge dose of drug (Porrino and Lyons, 2000; Breiter et al., 1997). In addition, the animal literature has identified two other brain regions to be critical in models of primed relapse. One area is the ventral tegmental area that, as outlined above, contains dopamine cells projecting to the cortex and nucleus accumbens. The other region that has been associated with stress-induced relapse is the bed nucleus of the stria terminalis, and probably the accompanying nuclei of the extended amygdala. Finally, recent evidence has emerged indicating a possible role for the ventral subiculum, where elec-trical stimulation was found to induce reinstatement of drug seeking for cocaine (Vorel et al., 2001).

There is a growing realization that stimulus-evoked drug-seeking behavior is comprised of two circuits, a motor memory circuit and a limbic priming circuit (see Figure 13.2). The motor memory circuit consists of the motor nuclei in the motive circuit including the dorsal prefrontal and ventral orbital cortex, core of the nucleus accumbens and dorsolateral ventral pallidum. The limbic priming circuit activates the motor memory circuit in re-sponse to various stimuli. The stimuli activate the motor mem-ory circuit via limbic circuitry, and the limbic nuclei involved are somewhat distinct depending upon stimulus modality. The ventral tegmental area is integral to all stimulus modalties, and the extended amygdala and basolateral amygdala contribute dif-ferentially depending on whether the stimulus is a stressor or a drug-associated cue, respectively (Figure 13.3).

This portion of the circuit may be integral to all forms of drug-taking behavior. Priming stimuli access this circuit primarily via the prefrontal cortex and evoke behaviors organized to obtain drug reward. Thus, the motor memory circuit functions akin to a procedural memory circuit and, when accessed by a priming stimulus, provides a programmed sequence of learned behaviors to obtain drug.

The regions of the prefrontal cortex most clearly shown in neuroimaging studies to be activated by drug-associated en-vironmental or pharmacological cues are the anterior cingulate and ventral orbital cortices (Volkow and Fowler, 2000; Childress et al., 1999). Both of these cortical areas make substantial gluta-matergic projections to the nucleus accumbens (Groenewegen et al., 1996).

Although the role of the accumbens to pallidum projection in primed reinstatement is only just emerging, this projection has long been known to mediate motor activity initiated by mo-tivationally relevant stimuli (Mogenson et al., 1980, 1993; Burns et al., 1994). From this literature it is clear that both dopamine and glutamate transmission in the nucleus accumbens are nec-essary conditions for normal motor stimulation to occur (Burns et al., 1994; Robbins and Everitt, 1996; Vanderschuren and Kalivas, 2000). The data show an association between gluta-mate, but not dopamine transmission in the nucleus accumbens and drug-seeking behavior. However, in contrast to the nucleus accumbens, dopamine transmission in the dorsal prefrontal cor-tex or basolateral amygdala has been shown to be critical to the execution of cocaine- or cue-primed reinstatement, respectively (See et al., 2001; McFarland and Kalivas, 2001)

Acute administration of a drug that was previously self-administered is known to elicit craving and drug-seeking behaviors in experimental animals and human addicts (O’Brien 2001; Markou et al., 1993). The role of dopamine at inducing priming is well established since both systemic and intra-cortical administration of dopamine blockers have been shown to inhibit drug-primed reinstatement. However, activation of dopamine neurons is apparently not a prerequisite, although having an intact dopamine system is permissive. Figure 13.3 illustrates the circuit critical for cocaine-primed reinstatement. It is proposed that this is a minimal circuit and that other drugs of abuse may involve additional brain nuclei that activate dopamine cells. For example, disinhibition of GABAergic input to dopamine cells in the ventral tegmental area by a microinjection of morphine is known to elicit reinstatement in animals trained to self-administer heroin (Stewart, 1984).

When animals or humans experience drug effects in the presence of an environmental stimulus (cue), a learned association develops such that presentation of that cue will elicit craving and behavior organized to obtain drug reward. Cue-primed reinstatement of drug-seeking behavior is clearly dependent upon the functional integrity of the basolateral amygdala (Meil and See, 1997; Grimm and See, 2000). This region of the amygdala has also been shown to be critical for many forms of stimulus-reinforcer associations (Everitt et al., 1999). Moreover, it was recently shown that in a manner analogous to the role of the prefrontal cortex in drug-primed reinstatement, blockade of D1 dopamine receptors in the basolateral amygdala prevents cue-primed reinstatement (See et al., 2001). This effect implies that presentation of the cue activates the projection from the ventral tegmental area to the basolateral amygdala, and is consistent with a well-developed electrophysiological literature showing that dopamine neurons in the ventral tegmental area increase burst firing following presentation of a cue that predicts a reward (Schultz, 1998).

Present knowledge suggests the possibility of a final common pathway for addiction, and possibly similar brain circuits between drugs and stimuli that provoke craving and relapse. The extant data support a common role of the motor memory circuit shown in Figure 13.3 that consists of the series projection from the prefrontal cortex to nucleus accumbens to ventral pallidum. Moreover, there is abundant evidence for enduring neuroadaptations in gene expression and neuronal function in the nucleus accumbens and prefrontal cortex following a bout of drug taking (Nestler, 2001; Kalivas, 2002). While the finding from multiple lines of research are promising in pointing towards a common site of intervention in addiction, it is important to note that such a generalization based primarily on work with psychostimulants is premature and requires substantially more research using other classes of drugs to validate. Similarly, the proposal for a final common motor memory pathway mediating craving and relapse induced by different modalities of stimuli is based on only a modest number of neuroimaging studies in addicts and experimental models of relapse. Nonetheless, sufficient supportive data has accrued to at least speculate on the prepotent involvement of the motor memory pathway in addiction, especially the glutamatergic projection from regions of the prefrontal cortex including the anterior cingulate and ventral orbital cortex to the core of the nucleus accumbens. Likewise, dopamine projections to prefrontal cortex and allocortical areas such as the basolateral amygdala are also critical.

These emerging hints and hypotheses pose directions for novel pharmacological therapeutic strategies for ameliorat-ing craving and relapse associated with addiction. Notably, pharmacological regulation of glutamate transmission in the cor-tical projection to the nucleus accumbens would seem to be a po-tential target. Given that enhanced release of glutamate appears to be associated with cue-, drug-, and perhaps, stress-primed re-lapse, diminishing that release would be one possible mechanism for pharmacotherapeutic intervention.