Dementia in Schizophrenia and its Neuropathological and Neurochemical Sequelae

Neuropathological Causes of Dementia in the Elderly

In his original work, Alzheimer described the plaques and tangles that have not only withstood modern scrutiny of the original index case (Graeber and Mehraein, 1999) but have become the diagnostic hallmarks of the disease known as Alzheimer’s disease. Neurofibrillary tangles (NFT) and senile/neuritic plaques (NP) are the principal lesions of Alzheimer’s disease (Rogers and Morrison, 1985; Tomlinson et al., 1970) and form the basis for the neuropathological diagnosis of AD (Mirra et al., 1991; Khachaturian, 1985; NIA-Reagan, 1997). In addition to NPs and NFTs, there is generally macroscopic evidence of cerebral cortical atrophy, reduced brain weight, and enlargement of the ventricles; however, because of the considerable overlap between AD and normal control subjects and the frequency of similar changes in other degenerative diseases (e.g., Pick’s disease), these macroscopic findings are not diagnostically informative (Perl, 2000; Dickson, 2001; Adams and Duchen, 1992).

Neuritic plaques are extracellular spheroid elements (10–120 µm in diameter) with complex structures that include amyloid fibrils and dystrophic neurites (Figure 14.1) that are frequently surrounded by microglia and reactive astrocytes. The core of the plaque is composed of amyloid beta-peptide (Aβ) surrounded by abnormal neuronal processes and fragments (Glenner and Wong, 1984; Selkoe, 1991, 1994, 2000). Aβ is derived from the sequential proteolytic cleavage of a larger protein known as amyloid precursor protein (APP). APP is highly conserved in evolution being expressed in all mammals studied and in most organs. An above-normal accumulation of NPs with Aβ cores in the cerebral cortex, hippocampal formation and subcortical structures has constituted the principal diagnostic measure of AD (Mirra, 1991; Khachaturian, 1985). 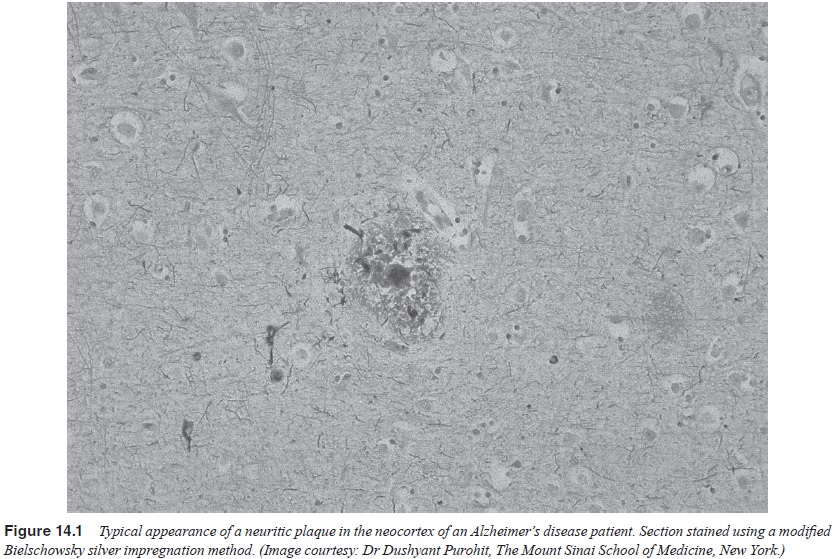 The precise mechanism(s) by which Aβ causes cell damage and neuronal degeneration are not presently understood. It should be kept in mind, however, that although it is broadly accepted that Aβ plays an important role in AD, its role as the primary etiological agent in the disease process is not universally accepted with cer-tainty (Davies, 2000). Furthermore, how, if at all, NPs and NFTs interact and influence each other is far from being understood.

Neurofibrillary tangles constitute the second hallmark of AD. Although the most commonly used formal neuropathological diagnostic criteria for AD rely almost exclusively on the density of neocortical NPs (Mirra et al., 1991; Khachaturian, 1985), a number of studies have argued that the development of NFTs, especially in the entorhinal cortex, represents the earliest neuropathological change in AD (Jellinger et al., 1991; Braak and Braak, 1996b; Braak et al., 1996; Hyman, 1997; Bouras et al., 1993).

NFTs are intracellular coarse fibrillary structures that can sur-round the neuronal nucleus and extend into the neuronal processes. Although NFTs are observed in neurons that are otherwise appar-ently “healthy’’, it is generally, but not universally assumed that NFT formation leads to eventual neuronal death (Davies, 2000). NFTs are composed of pairs of approximately 10 nm filaments entwined into helices with a signature periodicity of approximately 160 nm.

Although neurons bearing NFTs in the hippocampus and the entorhinal cortex are observed in many if not most elderly indi-viduals, the “spread’’ of NFTs to the neocortex (Braak stage III and above) is almost always associated with some level of dementia.

Despite considerable advances in understanding the neuro-biology and genetics of Aβ and NFTs (see later), linkage between these two apparently diverse lesions has not been clearly estab-lished. It may be tempting to argue that AD is the result of the coincidence of two relatively independent neurobiological abnor-malities. It is well established that a single mutation in the APP or an APP-related gene can cause AD. Thus, there are considerable gaps in our knowledge of the mechanisms by which the full spec-trum of AD neuropathology is expressed and a more complete understanding of the etiology of AD must await further research. 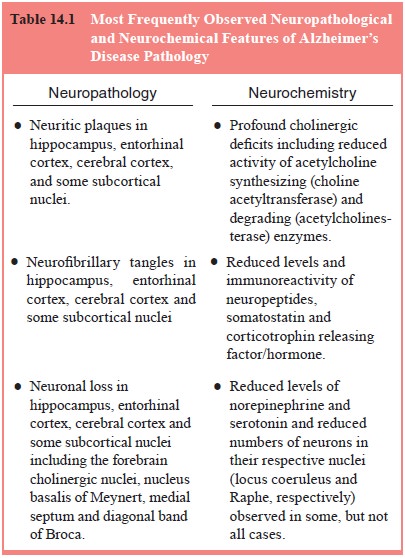 Given the neuronal degeneration and the reductions in neuronal size and arborization in AD, it is only reasonable that the numbers of synapses and their integrity should be compromised in AD. Synaptic neurotransmission, like all forms of exocytosis, requires an array of proteins. These proteins have varying ion and guanine nucleotide sensitivities, and possess intricate functional and biochemical kinships. Synaptic proteins on vesicles within the synapse and on synaptic membranes interact to enable neurotransmitter-bearing vesicles to dock with synaptic membranes and become ready for neurotransmitter release. Although losses of synaptic proteins are not unexpected in a degenerative disease, the fact that the loss of synaptic marker proteins significantly and profoundly correlate with the severity of dementia (Terry et al., 1991; Masliah et al., 1989; Lassmann et al., 1993; Heinonen et al., 1995; Tiraboschi et al., 2000) suggest that the loss of synapses may play a pivotal role in the expression of the symptoms of AD.

The identification or recognition of neurobiological indices of inflammation in the AD brain was initially controversial because of the belief that the brain was immunologically privileged (Rogers and Shen, 2000). More than a decade of research and hundreds of studies have now confirmed the presence of inflammatory responses in the AD brain (Akiyama et al., 2000) and have raised the possibility of the potential benefit of anti-inflammatory therapeutic avenues (Akiyama et al., 2000; Aisen, 2000; Anthony et al., 2000). It is generally acknowledged that inflammation of the brain or its neurons is unlikely to be the primary etiological factor in AD, but that it is initiated by AD-specific pathogenic processes such as deposition of NPs and/or NFTs. However, as in many other diseases, once initiated, inflammatory responses may contribute to the progression of the disease and its malignancy (Rogers and Shen, 2000).

Although a thorough understanding of the development of different neuropathological features of AD and their relationship to the progression of dementia must await the development of sensitive in vivo markers of neuropathology, the existing evidence supports the hypothesis that NPs and NFTs are “dose-depend-ently’’ associated with the earliest manifestations of AD-type dementia and that inflammatory responses and neurochemical deficits such as the cholinergic deficit become evident as demen-tia severity becomes more pronounced.

Dementia in Schizophrenia and its Neuropathological and Neurochemical Sequelae

Chronic schizophrenia, with its onset in early adulthood can in geriatric years become a disorder that is commonly associated with dementia (Davidson and Haroutunian, 1995; Harvey et al., 1992, 1996; Davidson et al., 1995). The findings of continuing deterioration of the symptoms of schizophrenia, the cognitive performance of schizophrenics, especially the apparent dementia that has been documented in elderly schizophrenics (Davidson and Haroutunian, 1995; Harvey et al., 1997, 1999a, 1999b;), and progressive enlargement of the ventricles, especially in poor-outcome schizophrenics (Davis et al., 1998) has raised the possibility of a neurodegenerative component to the disease process or to its dementia.

The age-related emergence of cognitive impairment in schizophrenia fueled hypotheses linking dementia in elderly schizophrenics to AD and positing that the dementia of late-life schizophrenia was a consequence of comorbid AD (Davidson and Haroutunian, 1995; Arnold et al., 1994). However, several large postmortem studies failed to support this hypothesis. Thus, although there is clear evidence for dementia in at least a subpopulation of elderly schizophrenics, the neuropathological and neurobiological substrates of this dementia have remained elusive and, as of yet, undetermined.