Boolean algebra is a mathematical discipline that is used for designing digital circuits in a digital computer. 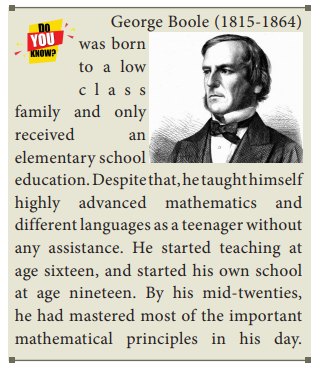 Every day we have to make logical decisions:

1. Should I carry Computer Science book every day? Yes / No

3. Chennai is capital of India? Yes / No

4. What did I say yesterday?

Boolean algebra makes use of variables and operations (functions). The basic logical operations are AND, OR and NOT, which are symbolically represented by dot ( . ), plus ( + ), and by over bar / single apostrophe respectively. These symbols are also called as “Logical Operators”.

The AND operator is defined in Boolean algebra by the use of the dot (.) operator. It is similar to multiplication in ordinary algebra. The AND operator combines two or more input variables so that the output is true only if all the inputs are true. The truth table for a 2-input AND operator is shown as follows: 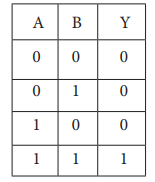 The above 2-input AND operation is expressed as: Y = A . B

The plus sign is used to indicate the OR operator. The OR operator combines two or more input variables so that the output is true if at least one input is true. The truth table for a 2-input OR operator is shown as follows: 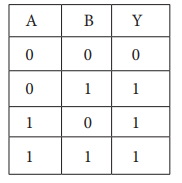 The above 2-input OR operation is expressed as: Y = A + B

The NOT operator is represented algebraically by the Boolean expression: 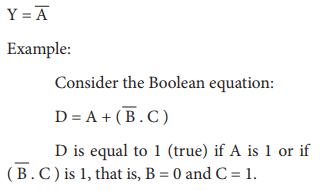 Otherwise D is equal to 0 (false).

The basic logic functions AND, OR, and NOT can also be combined to make other logic operators such as NAND and NOR

The NAND is the combination of NOT and AND. The NAND is generated by inverting the output of an AND operator. The algebraic expression of the NAND function is:

The NAND function truth table is shown below: 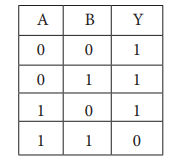 The NOR is the combination of NOT and OR. The NOR is generated by inverting the output of an OR operator. The algebraic expression of the NOR function is:

The NOR function truth table is shown below: 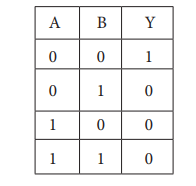