Chapter: Essential Anesthesia From Science to Practice : Applied physiology and pharmacology : Anesthesia and the cardiovascular system

Blood pressure and its determinants 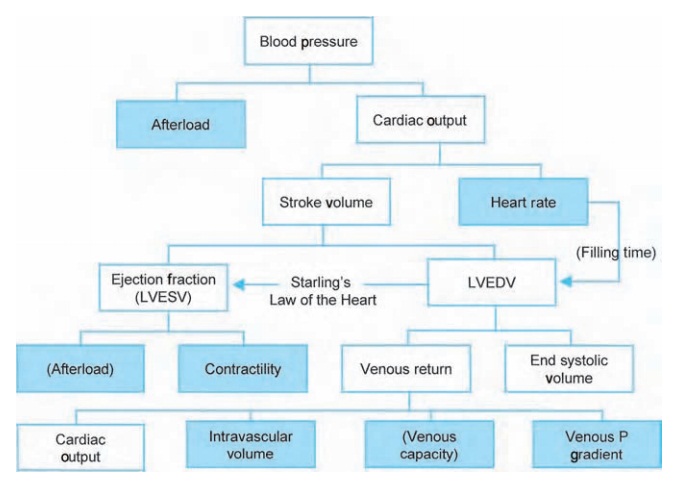 To understand how surgery and anesthesia affect blood pressure, we must con-sider its basic components (Fig. 9.1).

Blood pressure and its determinants

To understand how surgery and anesthesia affect blood pressure, we must con-sider its basic components (Fig. 9.1). First, afterload, the combination of all resis-tances against which the heart must eject. Its aliases include systemic vascular resistance (SVR) and total peripheral resistance (TPR). This parameter cannot be measured, but rather is calculated based on the relationship of pressure to flow:1

The vasomotor center influences the diameter of peripheral vessels through sympathetic α1 innervation. SVR, then, changes with anything that affects the vasomotor center (the baroreflex (see below), anesthetics), the sympathetic chain (neuraxial (epidural or spinal) anesthesia), α1 receptors (catecholamines, vaso-pressors), or smooth muscle of the vessel wall directly (histamine, anesthetic agents, nitric oxide). 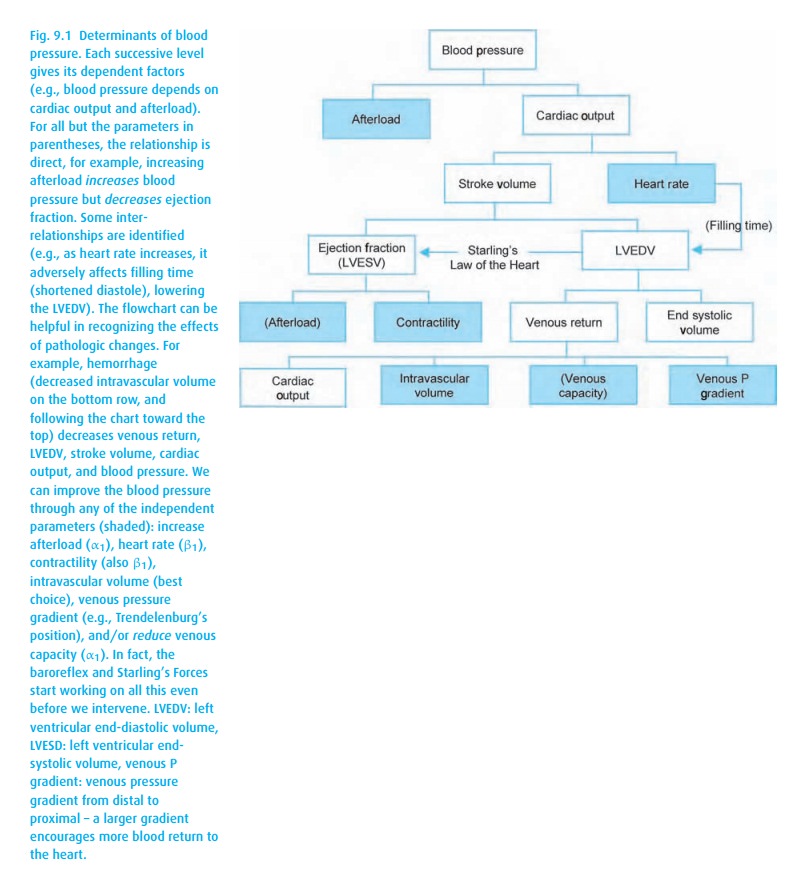 Cardiac output, the other determinant of blood pressure, depends on heart rateand stroke volume. Heart rate is somewhat more complex than it may first seem, with both sympathetic (β1) and parasympathetic innervation “battling it out” for supremacy. Here, the baroreflex exerts its influence, as well as the majority of pharmacologic agents we use to manipulate the heart rate.

For stroke volume, there are multiple factors in play, beginning with Starling’slaw of the heart2(Fig.9.2). Basically, it states that the heart tends to pump outall the blood it receives, in essence maintaining the same end-systolic volume. Note the normally sloped Starling curve: stroke volume increases directly with the filling volume (measured as left ventricular end-diastolic pressure (LVEDP), central venous pressure (CVP) or pulmonary capillary wedge pressure (PCWP). Think of the actin and myosin filaments having an optimal overlap. With little ventricular volume, they are completely overlapped and can generate little pres-sure. Similarly, at some point, they become over-stretched, beyond their optimal overlap, causing a reduction in force, represented by the flat or downward sloping portion at the right-most end of the curve. Notice the flatness of the heart failure curve; increasing preload does not really help these patients. From the Starling curve, we see that, if a patient becomes hypotensive but has an abnormally high CVP, something must be wrong with the ejection of the blood – either ischemia or perhaps diastolic dysfunction from some other cause. 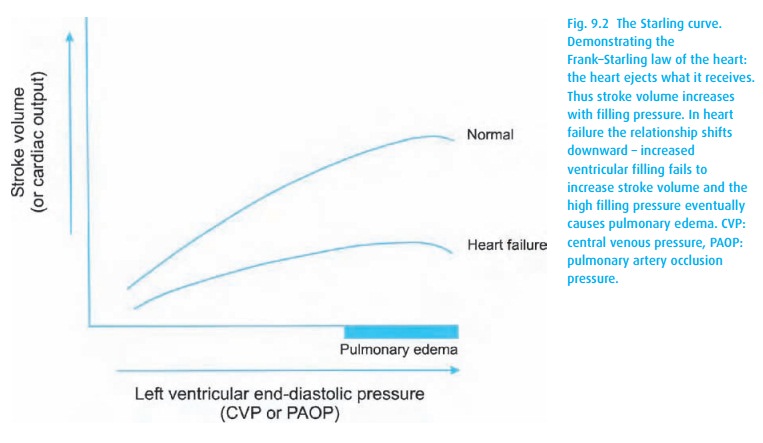 Starling’s law is in evidence when anesthetics cause venodilation, either directly or through inhibition of the sympathetic nervous system (there are some α1 recep-tors on the venous side). This increased venous capacity causes peripheral pool-ing of blood away from the heart and reduces the venous pressure that ordinarily pushes blood back toward the right side of the heart. Functionally, this results in a reduced preload, limiting the stroke volume via Starling’s law of the heart. Thus, managing anesthesia-induced hypotension with intravenous fluids makes a lot of sense. The fact this fluid must then be mobilized once the anesthetic effects are removed is another issue.

Remember that Starling’s law is “length-dependent shortening” of heart mus-cle fibers and should not be confused with the energy-consuming contractility (although it is often difficult to distinguish these). For a given filling pressure, increasing contractility will shift the Starling curve upward, resulting in increased stroke volume (decreased end systolic volume). Such a shift can be achieved via β1 receptors, either endogenously through the sympathetic nervous system and/or the baroreflex, or pharmacologically with many agents. Some anesthetic agents (particularly the volatile anesthetics) are direct myocardial depressants and will cause a dose-dependent downward shift and flattening of the Starling curve. Thus not only is there less central blood volume due to venodilation, more is required to achieve the same stroke volume.

Other basic physical concepts to understand when thinking about the cardio-vascular system include the following.

·           Compliance The change in pressure resulting from a change in volume ( V/ P).As blood flows into a vessel, the highly compliant veins will greatly dilate to accommodate the volume, while the less compliant arteries dilate less, with a great increase in pressure. In many ways, compliance and resistance are simply the inverse of each other.

·           Starling’s Forces Not to be confused with his law of the heart (Dr. Starling, 1866–1927, was a busy man!). No vessel wall is entirely impermeable. Two main forces push and pull fluids across membranes (see Fig. 9.3). On the arterial side, the hydrostatic pressure on the luminal side of a capillary pushes fluid through the wall, while on the venous side, oncotic pressure of the proteins pulls fluids back into the vessel. You can readily imagine how increased capillary pressure and decreased oncotic pressure (low albumin) lead to the accumulation of fluids outside the capillary, i.e., edema.

So, putting it all together, the right atrium/ventricle receives oxygen-poor blood from the periphery and pumps it through the low resistance vascular bed of the lungs for a swap of carbon dioxide for oxygen. Meanwhile, the left atrium and ventricle stand by to receive the oxygenated blood and pump it on its way to the periphery. Upon taking leave of the heart, the blood travels through the aorta and peripheral arteries. The speed with which it is propelled forward depends not only on the cardiac output but also on the character of the arterial vessels. If hard and inelastic (an old aorta can have poor compliance; atheromatous vessels in the periphery offer high resistance), the stroke volume from a cardiac contraction will cause a substantial increase in pressure.

The venous side represents a quintessential low resistance bed. It accommo-dates large volumes of fluid with little rise in pressure, at least up to a point. A number of factors can increase the pressure and decrease flow in the vena cava: the surgeon with a hand in the abdomen, the uterus with a baby inside, the ventila-tor running up a high peak inspiratory and, consequently, intrathoracic pressure, the patient performing a Valsalva maneuver, the abdomen insufflated with gas for a laparoscopy, or the heart if it is stiff from diastolic dysfunction, or if it cannot expand because of fluid in the pericardial sac (tamponade).

Finally, we must briefly discuss the control mechanisms that keep everything running smoothly.

Finally, we must briefly discuss the control mechanisms that keep everything running smoothly.

So blood pressure can take a major hit with decreases in preload (blood/fluid loss, venodilation), contractility and afterload. The body, however, has reflexes to try to fix this. For short-term blood pressure control, the baroreflex bears the brunt of the responsibility.

Located in the carotid sinus, the baroreceptor provides the most important imme-diate feedback mechanism for short-term control of blood pressure. These pres-sure receptors have a basal firing rate, stimulating the vagal center and inhibiting the vasomotor center (Fig. 9.4).

Hypertension increases the firing rate, amplifying the vagal effects. Conversely, hypotension results in decreased baroreceptor firing (a little counter-intuitive), resulting in reduced stimulation of the vagal centers and less inhibition (as opposed to stimulation) of the vasomotor center. The end-result is increased sympathetic outflow, resulting in increased heart rate, contractility, and SVR with decreased venous capacity. This reflex requires an intact sympathetic nervous sys-tem, that is, one that has not been destroyed by the ravages of diabetes, blocked with neuraxial anesthesia, or depleted with illicit drugs, e.g., cocaine.

Stretch on the atria, particularly the sinoatrial node, results in reflex vasodilation and decreased blood pressure, as well as increased heart rate. Simultaneously, atrial stretch receptors elicit the Bainbridge reflex3 with a vagal afferent to the medulla and efferents through the vagus and sympathetics to increase heart rate and contractility.

Located in the carotid and aortic bodies, the chemoreceptors are stimulated by decreasing oxygen and increasing carbon dioxide and hydrogen ion. They affect the vasomotor center to increase blood pressure, as well as stimulate breathing. Of less importance, receptors in the ventricles elicit a vasodepressor (vasodilation and bradycardia) response to decreased ventricular volume (vasovagal reflex) or certain chemical or mechanical stimuli (Bezold–Jarisch reflex).4

Long-term blood pressure control occurs through the kidney and aldosterone, renin, and angiotensin, which alter the volume of fluid in the system and can adjust vascular resistances as well.