Black Money is a form of unaccountable Money. Black Money is mostly created by business people. They do not show actual income earned in their economic activites. 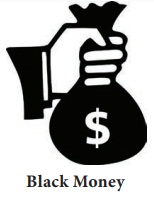 The black money is accumulated by the criminals, smugglers, hoarders, tax-evaders and other anti-social elements of the society. In India, black money is funds earned in the black market, on which income and other taxes have not been paid.The total amount of black money deposited in foreign banks by Indians is unknown. The root cause for the increasing rate of black money in the country is the lack of strict punishments for the offenders.

Effects of Black Money on economy

4. Widening gap between the rich and poor

InIndia, On 8-November-2016, the Government of India announced demonetization of all ₹500 and ₹1000 bank notes against Black Money.

1. Under pressure from India and other countries, Switzerland has made key changes in its local laws governing assist foreign allegedly stashed in Swiss Banks.

2. Special Investigation Team appointed by government on the directions of Supreme Court on black money.

Some Legislative Framework in India against to Black Money

4. The undisclosed foreign Income and Asset Bill(Imposition of Tax) 2015