Oocytes develop in the ovaries of female frogs in a development process that takes from three months to several years.

Oocytes develop in the ovaries of female frogs in a development process that takes from three months to several years. Eventually the oocytes mature as eggs ready to be fertilized. These huge cells contain large amounts of nutrients and protein synthesis machinery so that later, the fertilized egg can undergo many cell divisions without significant intake of nutrients and without additional ribosome synthesis. 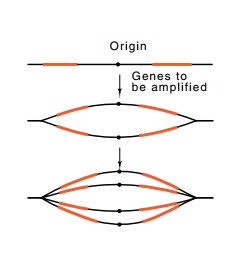 Figure 15.1 Two rounds of initia-tion from an origin can yield four copies of genes immediately sur-rounding that origin.

These are known as 7S and 42S particles from their rates of sedimenta-tion in centrifugation. Even though 5S RNA synthesis proceeds for a long time, the enormous number of RNA molecules needed in an egg necessitates that multiple genes encode the RNA. The Xenopus genome contains about 100,000 copies of the 5S gene. A special RNA polymerase transcribes these genes as well as genes coding for tRNAs. This is RNA polymerase III. Although it is different from the two other cellular RNA polymerases, it shares a number of subunits in common with them.

Once, a key to success in developmental biology was finding an organism or cell-type devoted to the activity you wished to study. In such cells the specialization in activity reduces the level of other and inter-fering activities. This simplifies the experimenter’s measurements. Also, the purification for biochemical study of the components involved is simpler since they are present in sizeable concentrations in these cells. For this reason Xenopus permitted careful examination of several im-portant developmental biology questions before the appearance of genetic engineering techniques.

The strategy of selective gene amplification used by Xenopus on its ribosomal RNA genes is not unique. Other organisms also utilize it for genes whose products are needed in high level. In terminally differenti-ated tissues where no further cell division occurs, the gene amplification can occur right on the chromosome by the selective activity of a replication origin (Fig. 15.1). Since an egg cell, however, must later divide, the mechanism of gene amplification must not irreparably damage the genome. In Xenopus a copy of the rRNA gene is replicated

Figure 15.2 Selective replication of rRNA genes yields as many as 4,000,000gene copies per cell.

free of the chromosome to generate high numbers of templates neces - sary for the synthesis of the RNA (Fig. 15.2). As the last components of a ribosome are synthesized, mature ribosomes form. Some begin trans-lating maternal mRNA while others remain inactive until fertilization triggers a more vigorous rate of protein synthesis.

As the oocyte matures, ribosome synthesis and most other activity ceases until fertilization activates protein synthesis. Then, after the developing embryo has reached the 4,000 cell stage, 5S ribosomal RNA synthesis begins again. A small fraction of the RNA synthesized at this time is the RNA species which was synthesized in the oocyte. Most, however, possesses a slightly different sequence. It is called somatic 5S RNA. The oocyte 5S RNA synthesis soon ceases altogether, leaving just the somatic 5S RNA synthesis. The haploid genome of Xenopus contains about 450 copies of the somatic variety of 5S gene in contrast to about 100,000 copies of the variety expressed only in oocytes.

Study of 5S RNA synthesis is attractive because the 5S genes show developmental regulation in that the oocyte 5S genes are expressed only in the developing oocyte whereas the somatic 5S genes are expressed both in the oocyte and in the developing embryo. In addition to the simple timing pattern of 5S RNAs, the product of the synthesis is simple. The 5S RNA is not processed by capping, polyadenylation, or splicing, nor is there a tissue specificity in the expression. Hence this seems like an ideal material for study of developmental questions.