As per the international ‘biome’ type of classification based upon climate, fauna and flora and the soil conditions.

As per the international ‘biome’ type of classification based upon climate, fauna and flora and the soil conditions, India can be divided into ten different biogeographic zones, (Fig. 12.3) namely: 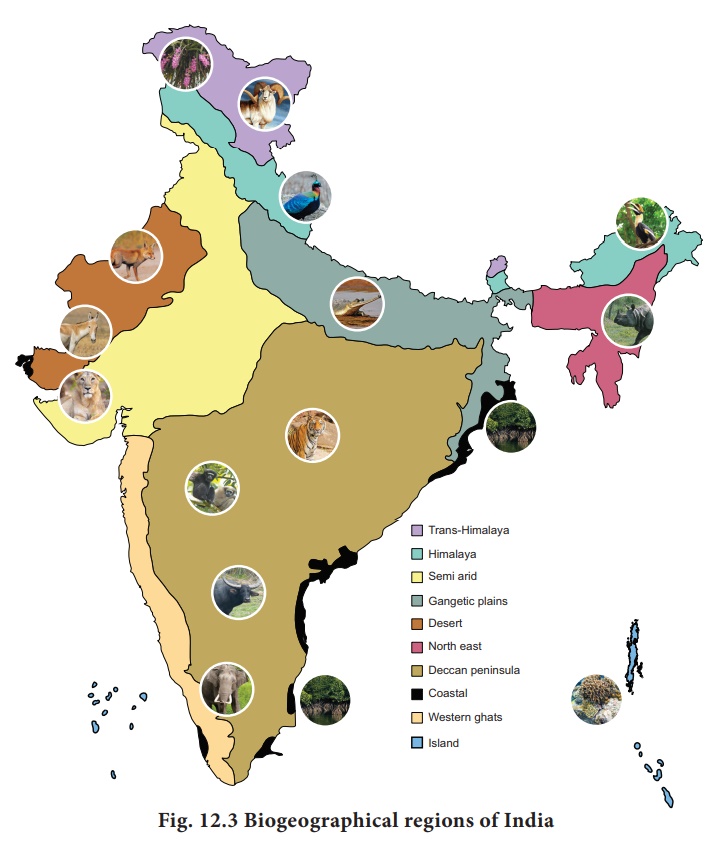 1. Trans Himalayan Region: An extension of the Tibetan plateau, high-altitude cold desert in Ladakh (J&K) and Lauhala Spiti (H.P) comprising 5.7% of the country’s landmass. The mountains of this region have the richest wild sheep and goat community in the world, renowned for its quality wool and wool products. Other fauna include Chiru and Black-rocked Crane.

2. Himalayas: The entire mountain chain running from north-western to north-eastern India, comprising a diverse range of biotic provinces and biomes and covers 7.2% of the country’s landmass. The common fauna of the Himalayan ranges, are the wild sheep, mountain goats, shrew, snow leopard and panda, many of which are endangered.

3. Indian Desert: The extremely arid area west of the Aravalli hill range, comprising both the salty desert of Gujarat and the sand desert of Rajasthan. It comprises 6.9% of the country’s land-mass. Wild ass is endemic to this region. It is also the habitat for the Indian Bustard, camel, foxes and snakes, many of which are endangered.

4. Semi – Arid Zones: This zone is between the desert and the Deccan plateau, including the Aravalli hill range covering 15.6% of the country’s landmass. Fauna found here are nilghai, blackbuck, four horned antelopes, sambar, chital and spotted deer which are herbivores along with predators like Asiatic lion, tiger, leopard and jackal.

5. Western Ghats: Western Ghats, are mountain ranges along the west coast of India, extending over almost 1,500km from Sat Pena in south Gujarat to the southernmost tip of Kerala. The annual rainfall is about 2000 mm. This zone has large populations of Nilgiri tahr (State animal of Tamil Nadu), Nilgiri langur, tiger, leopard, and Indian elephant.The grizzled squirrel and lion tailed macaque are endemic to this region.

6. Deccan Peninsula: This covers much of the southern and south-central plateau with a predominantly deciduous vegetation and 4.3% of the country’s landmass.

It is known for deciduous forests, thorn forests and pockets of semi ever green forests. Fauna found here are Chital, Sambhar, Nilghai, elephant, sloth bear, black buck and barking deer. It is the catchment area of major Indian rivers like Godavari, Tapti, Narmada and Mahanadi.

7. Gangetic Plains: These plains are relatively homogenously defined by the Ganges river system and occupy about 11% of the country’s landmass. This region is very fertile and extends up to the Himalayan foothills. Fauna includes rhinoceros, elephant, buffalo, swamp deer, hog-deer.

8. North-East India: The plains and non-Himalayan hill ranges of north eastern India are home to a wide variety of vegetation. With 5.2% of the country’s landmass, this region represents the transition zone between the Indian, Indo-Malayan and Indo-Chinese bio-geographical regions and is the meeting point of the Himalayan Mountains and peninsular India. The North-East is thus the biogeographical ‘Gateway’ for much of India’s fauna and flora and also biodiversity hotspot (Eastern Himalaya), which includes the Indian rhinoceros, leopard and golden langur.

9. Coastal Region: Coastal region of India with sandy beaches, mud flats, coral reefs, mangroves constitutes 2.5% of the total geographical area. The coastline from Gujarat to Sundarbans is estimated to be 5423km long. Apart from this a total of 25 islets constitute the Lakshadweep, which are of coral origin and have a typical reef lagoon system, rich in biodiversity. The fauna includes native crabs, turtles and tunas

10. Andaman and Nicobar Islands:The Andaman and Nicobar Islands in the Bay of Bengal have highly diverse set of biomes, constituting 0.3% of the total geographical area. They are centers of high endemism and contain some of India’s finest evergreen forests and support a wide diversity of corals. Fauna includes Narcondam hornbills of the Andamans and the South Andaman Krait.