Biodiversity and its conservation: Questions and Answers (Evaluation)

1. Which of the following regio n has maximum biodiversity

2. Conservation of biodiversity within their natural habitat is

3. Which one of the following is not coming under insitu conservation

4. Which of the following is considered a hotspots of biodiversity in India

5. The organization which published the red list of species is

6. Who introduced the term biodiversity?

7. Which of the following forests is known as the lungs of the planet earth?

8. Which one of the following are at high risk extinction due to habitat destruction

9. Assertion: The Environmental conditions of the tropics are favourable for speciation and diversity of organisms. Reason: The climate seasons, temperature, humidity and photoperiod are more or less stable and congenial.

b) Both Assertion and Reason are true but Reason is not the correct explanation of Assertion.

c) Assertion is true , but Reason is false.

d) Both Assertion and Reason are false.

Endemism is an ecological word that a plant or animal lives only in a particular location such as specific island, (or) defined zone. For example wild ass is endemic to Indian desert.

11. How many hotspots are there in India? Name them.

There are 4 hot spots in India

12. What are the three levels of biodiversity?

13. Name the active chemical found in the medicinal plant Rauwolfia vomitoria. What type of diversity it belongs to?

Reserpine is the active chemical found in the medicinal plant Rouwolfia vomituria. It belongs to genetic diversity.

14. “Amazon forest is considered to be the lungs of the planet”-Justify this statement.

The Amazon in South America is over 2.1 million square miles of rainforest, which in more than half of the rain forest on the entire planet. Trees release Oxygen into the air during photosynthesis.

Hence the Amazon is considered to be the lungs of the planet because it is responsible for more production of oxygen.

1) 'Rd data book' is a catalogue of taxa facing risk of extinction.

16. Extinction of a keystone species led to loss of biodiversity – Justify.

1) Species is considered extinct when none of its members are alive any where in the world.

2) In the 450 million years of life on earth there had been 5 mass extinctions, which had eliminated at least 50% of the species of flora and fauna on the globe.

3) The extinction of species is due to environmental changes and population characteristics.

4) Amphibians seem tobe at higher risk of extinction because at habitat destruction.

5) Thus the most serious aspect of the loss of biodiversity in the extinction of species.

17. Compare and Contrast the insitu and exsitu conservation.

2. It is the process of protecting an endangered plant or animal in its natural habitat either by protecting or restoring the habitat itself or by defending the species from predators.

1. This is a conservation strategy which involves placing of threatened animals and plants in special core locations for their protection.

2. It helps in preventing their extinction under simulated conditions that closely resemble their natural habitats.

18. What are called endangered species? Explain with examples.

1. A species that has been categorized as very likely to become extinct is an endangered species.

2. Endangered as categorized by the IUCN.

3. Red list is the second most severe conservation status for wild animals in the IUCN's scheme after Critically Endangered [CR]

19. Why do we find a decrease in biodiversity distribution, if we move from the tropics towards the poles?

1. Temperature, Precipitation, distance from the equator, altitude from asea level are some of the factors that determine biodiversity distribution patterns.

2. There is an increasing diversity from the poles to equator.

4. Decrease in species diversity occurs as one ascends a high mountain due to drop in temperature.

THE REASONS FOR THE RICHNESS OF BIODIVERSITY IN THE TROPICS ARE:

a) The temperature vary between 25°C to 35°C a range in which most metabolic activities of living organisms occur with ease and efficiency.

b) The average rainfall is softer more than 200 mm per year.

20. What are the factors that drive habitat loss?

1) Natural habitats are destroyed for the purpose of settlement, agriculture, mining, industries and construction of highways.

2) Over population, urbanization, industrialization and agricultural advancement require additional land, H2O, & raw materials. This is possible only through fragmentation (or) destruction of natural habitats.

3) The Amazon rain forest a vast area, harbouring millions of spices also called 'Lungs of the planet' is destroyed and being replaced for agriculture & human settlements.

4) Kodaikanal & Nilgiri hills have been destroyed rapidly for human occupancy.

21. Where are biodiversity hotspots normally located? Why?

2) currently 34 biodiversity hotspots have been identified most of which occur in tropical forest.

22. Why is biodiversity so important and worthy of protection?

Biodiversity is essential for the well being of our planet and sustenance of life as a whole. The major functional attributes are!

2) Soi formation, conditioning or maintenance of soil health by soil microbial diversity along with the different tropic members.

8) Cleaning up of pollution - microbes are the biggest degraders of molecules. Which are present in effluents,sewage, garbage & agro chemicals.

23. Why do animals have greater diversification than plant diversity?

The animal have higher percent than the species diversity of plants because they are mobile and move from one place to another. They move to different habitatal eco system and developed species diversity.

24. Alien species invasion is a threat to endemic species – substantiate this statement.

2) They often become invasive and drive away the local species.

4) Amazon sailfin catfish is responsible for destroying the fish population in the wetland of Kolkata.

5) African apple snail (Achatina fulica) is most invasive among all alien fauna in India. More over it is becoming a vicious pest in vegetable farms.

6) Exotic earth worm compete for food with native varieties and deplete their population in soil.

1) Even though India is one of the 17 identified mega diverse countries of the world, it faces lots of threats to its biodiversity.

26. What is mass extinction? Will you encounter one such extinction in the near future. Enumerate the steps to be taken to prevent it.

1) The earth has experienced quite a few mass extinction due to environmental catastrophes.

2) It occurred about 225 million years ago during the Persian where 90% of shallow water marine in vertebrates disappeared.

i) Give places back to nature

iii) Change our economic system so it values nature

27. In north eastern states, the jhum culture is a major threat to biodiversity – substantiate.

1) In shifting cultivation, plots of natural free vegetation are burnt away and the cleared patches are farmed for 2-3 seasons after which their fertility reduces to a point.

2) The farmer then abandons this patch and cuts down a new patch of forest trees else where for crop production.

3) When vast areas are cleared and burnt it results in loss of forest cover, pollution and discharge of CO2

4) It leads to loss of habitat and climate change. Which has an impact on the biodiversity of that region.

The major causes for biodiversity decline are :

5) Over exploitation of resources (poaching cutting of trees, over fishing, hunting)

29. How can we contribute to promote biodiversity conservation?

4) Resting, feeding & breeding places of the organisms should be identified & protected.

5) Air, H2O & soil should be conserved on priority basis.

30. ‘Stability of a community depends upon its species diversity’ Justify the statement.

1) Bio diversity is the variety of life on earth. That is it is the number of different species of flora & fauna including micro organisms.

3) This variety is essential for the well being of our planet and sustenance of life as a whole.

5) It provides an index of health of an eco system.

6) Thus the survival of human race depends on the existence and well being of all life forms in the biosphere.

4) No human activity is permitted inside the national park.

1) Any Area other than the area comprised with any reserve forest or the territorial water can be notified by the state government to constitute as a sanctuary.

2) This is far the purpose of protecting, endangered species.

3) Sanctuaries are tracts of land where unit animal and fauna can take refuge without being hunted (or) poached.

4) Other activities like collection of forest products, harvesting of timber are permitted.

5) Periyar wild life sanctuary in Kerala is famous for the Indian Tiger and Asiatic Elephant.

1) It is an international non government organization founded in 1961.

2) This organization is working in the field at the wilderness preservation and the reduction of human impact on the environment.

3) The main aim is to stop the degradation of natural environment and to build a future in which humans live in harmony with nature.

1. Select the correct statement about biodiversity

a) Large scale planting of Bt cotton has no adverse effect on biodiversity.

c) Conservation of biodiversity is just a fad pursued by the developed countries.

d) The desert areas of Rajasthan and Gujarat have a very high level of desert animal species as well as numerous rare animals.

2. Sacred groves are specially useful in

b) Year-round flow of water in rivers

3. The highest number of species in the world is represented by

4. Which of the following is not used for ex situ plant conservation?

5. In which of the following both pairs have correct combination?

a) In situ conservation: National Park,

b) In situ conservation: Cryopreservation,

6. Cryopreservation of gametes of threatened species in viable and fertile condition can be referred to as

a) In situ conservation of biodiversity

d) In situ cryo-conservation of biodiversity

7. The species confined to a particular region and not

found elsewhere is termed as

8. Which of the following National Parks is home to the famous musk deer or hangal? 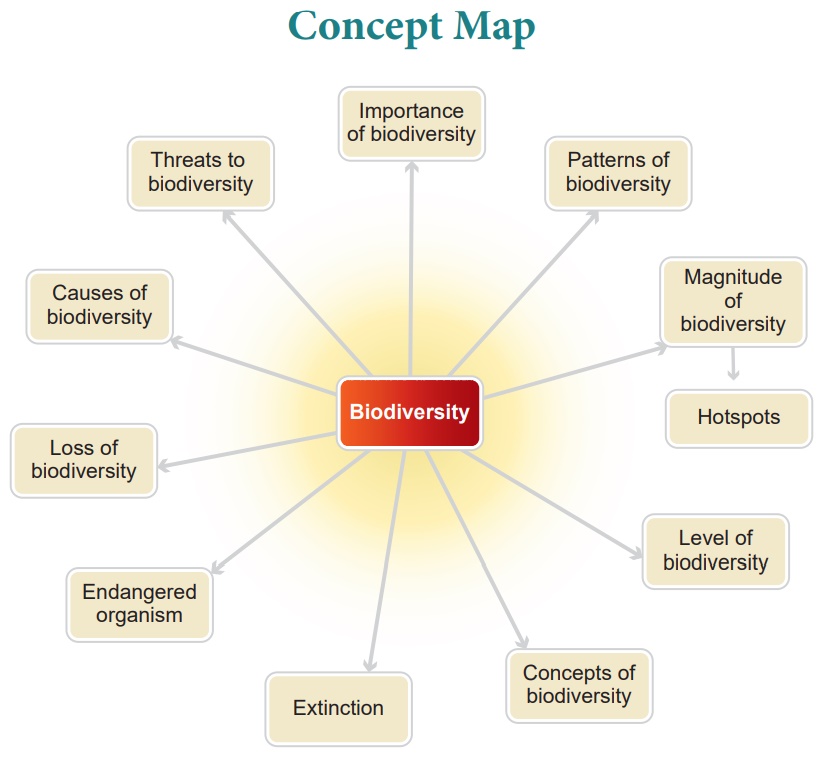 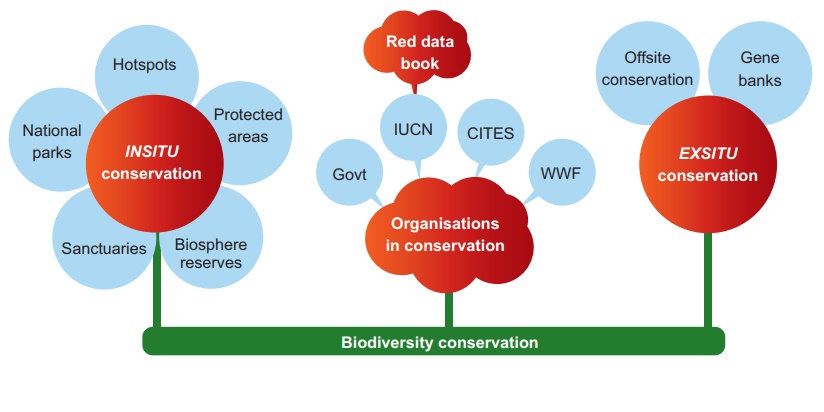