A basic block is a sequence of consecutive statements in which flow of control enters at the beginning and leaves at the end without any halt or possibility of branching except at the end.

•    A basic block is a sequence of consecutive statements in which flow of control enters at the beginning and leaves at the end without any halt or possibility of branching except at the end.

•   The following sequence of three-address statements forms a basic block

Input: A sequence of three-address statements

Output: A list of basic blocks with each three-address statement in exactly one block Method:

1.   We first determine the set of leaders, the first statements of basic blocks. The rules we use are of the following:

a.   The first statement is a leader.

b.   Any statement that is the target of a conditional or unconditional goto is a leader.

c.       Any statement that immediately follows a goto or conditional goto statementis a leader.

2.      For each leader, its basic block consists of the leader and all statements up to but not including the next leader or the end of the program. 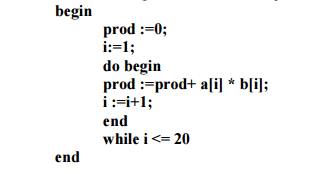 The three-address code for the above source program is given as :

Since the second and fourth expressions compute the same expression, the basic block can be transformed as above.

Suppose x is dead, that is, never subsequently used, at the point where the statement x : = y + z appears in a basic block. Then this statement may be safely removed without changing the value of the basic block.

Suppose a block has the following two adjacent statements:

We can interchange the two statements without affecting the value of the block if and only if neither x nor y is t1 and neither b nor c is t2.

Algebraic transformations can be used to change the set of expressions computed by a basic block into an algebraically equivalent set.

• Flow graph is a directed graph containing the flow-of-control information for the set of basic blocks making up a program.

The nodes of the flow graph are basic blocks. It has a distinguished initial node.

•   E.g.: Flow graph for the vector dot product is given as follows: 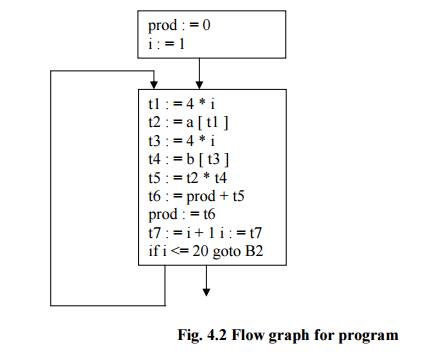 1.   All nodes in the collection are strongly connected.

2.   The collection of nodes has a unique entry.

• A loop that contains no other loops is called an inner loop.