An in-line engine is one wherein all the cylinders are arranged in a single line, one behind the other as schematically indicated in Fig.

An in-line engine is one wherein all the cylinders are arranged in a single line, one behind the other as schematically indicated in Fig. Many of the passenger cars found on Indian roads such as Maruti 800, Zen, Santro, Honda City, Honda CR-V, and Toyota Corolla all have four cylinder in-line engines. Thus this is a commonly employed engine and it is of interest to us to understand the analysis of its state of balance.

For the sake of simplicity of analysis, we assume that all the cylinders are identical viz., r, l ,   m min and met  are same. Further we assume that the rotating masses have been balanced out for all cylinders and we are left with only the forces due to the reciprocating masses. 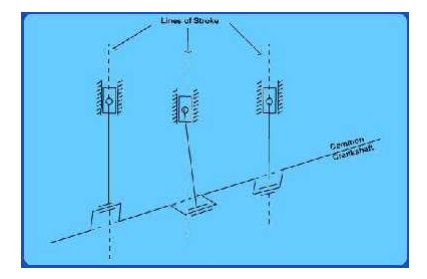 A radial engine is one in which all the cylinders are arranged circumferentially as shown in Fig.These engines were quite popularly used in aircrafts during World War II. Subsequent developments in steam/gas turbines led to the near extinction of these engines. However it is still interesting to study their state of balance in view of some elegant results we shall discuss shortly. Our method of analysis remains identical to the previous case i.e., we proceed with the assumption that all cylinders are identical and the cylinders are spaced at uniform interval (2π/n) around the circumference. 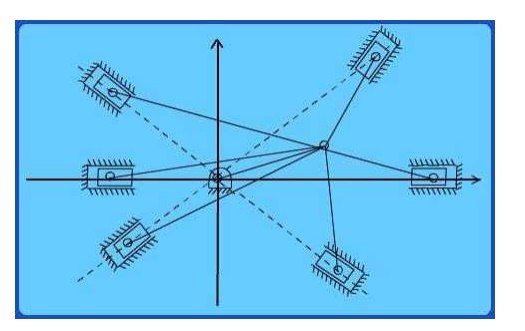