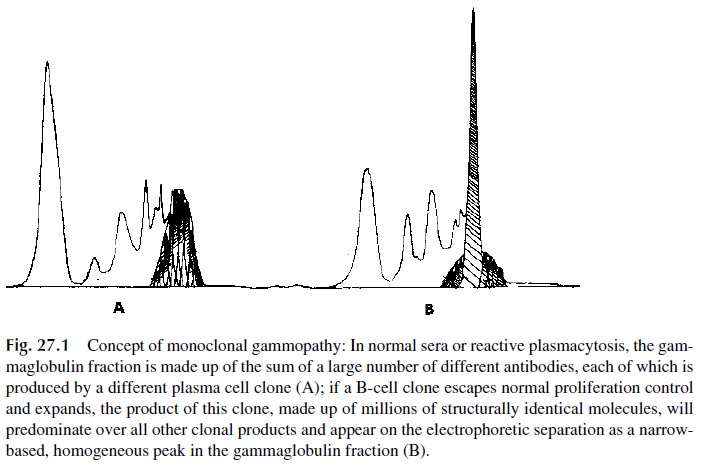 Monoclonal proteins or paraproteins, in practical terms, are defined by the fact that they are constituted by large amounts of identical molecules, carrying one single heavy-chain class and one single light-chain type, or, in some cases, by isolated heavy or light chains of a single type.

It must be noted that monoclonal proteins may be detected in pa-tients without overt signals of malignancy (some mutations may lead to clonal expansion without uncontrolled cell proliferation).

A. Diagnosis of B-Cell Dyscrasias

In general, the diagnosis of a B-cell dyscrasia relies on the demonstration of a monoclonal protein. Secreted paraproteins are detected by a combination of methods.

1.            Initial screening usually involves the electrophoretic separation of serum and urine from the suspected case (Fig. 27.2). To be sure that urinary proteins are not overlooked because of their low concentration, the urine sample must be con-centrated. 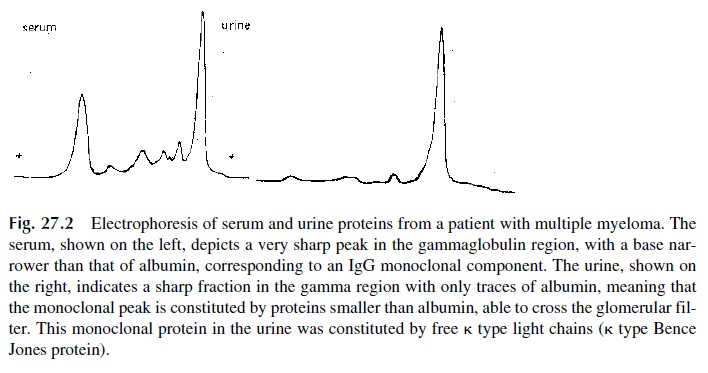 2.            Electrophoretic studies must usually be supplemented by immunoelectrophore-sis or by immunofixation. These studies are essential in order to characterize the paraproteins as containing one of the five possible classes of immunoglobulins and one of the two possible types of light chains (Fig. 27.3), necessary criteria to confirm the monoclonal nature of a suspected electrophoretic spike. 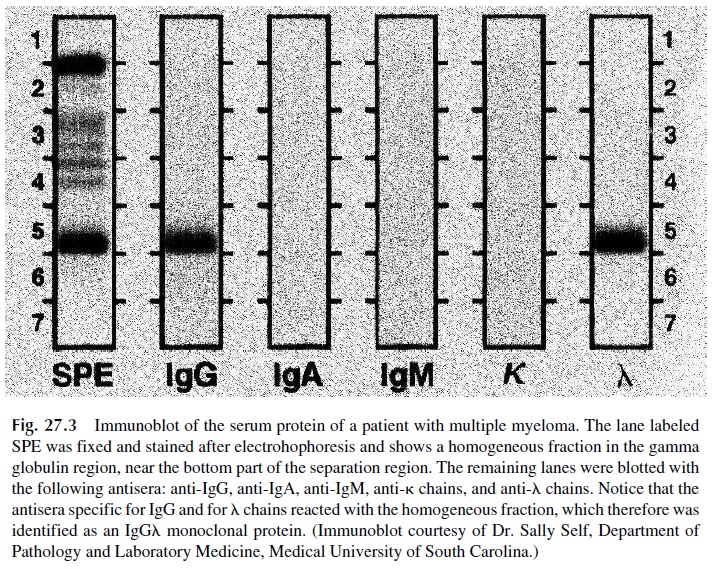 3.            The diagnosis of some specific B-cell dyscrasias, such as light-chain disease (a variant of multiple myeloma characterized by the synthesis of large amounts of homogeneous light chains), Waldenström’s macroglobulinemia, or the heavy-chain diseases, depends on the immunochemical characterization of the para-protein.

4.            In some instances, plasma cell dyscrasias do not result in the secretion of para-proteins. In rare cases of multiple myeloma, for example, the neoplastic muta-tion alters the synthetic process so profoundly that no paraproteins are produced (nonsecretory myeloma).

5.            B-lymphocyte malignancies may also not be associated with the synthesis of monoclonal proteins. Chronic lymphocytic leukemias are B-cell malignancies in more than 90% of the cases, but only one third show paraproteins; the remainder have monoclonal cell surface immunoglobulins only. B-cell acute lymphocytic leukemias show rearrangements of their immunoglobulin heavy-chain genes in chromosome 14, and the malignant cells may synthesize µ chains, but those re-main intracytoplasmic and there is no detectable monoclonal protein in serum or urine.

In the majority of cases, the finding of a monoclonal protein in a laboratory test does not give a very precise diagnostic indication. For example, the isolated finding of homoge-neous free light chains (Bence Jones protein) in the urine may correspond to one of the fol-lowing B-cell dyscrasias: (1) light-chain disease; (2) chronic lymphocytic leukemia; (3) lymphocytic lymphoma; or (4) “benign” or “idiopathic” monoclonal gammopathy. The precise diagnosis depends on a combination of clinical and laboratory data.

A 55-year-old woman was admitted with progressive weakness, malaise, fatigue, and loss of vision. She also felt short of breath after climbing one flight of stairs. She claimed that for the previous 3 months she had experienced a progressive loss of bilateral vision, which she described as progressive blurring, to the point that she could hardly walk around unas-sisted. She had also lost 5 pounds since she started feeling sick and had noticed easy gum bleeding after brushing her teeth. She had also experienced three episodes of nose bleed-ing in the last few weeks.

Her past medical history included two normal pregnancies, diffuse rheumatic pains for the last year, and an episode of pneumonia 6 months ago.

·              What is the significance of the fundoscopic abnormalities and exaggerated mucosal bleeding?