Cystic fibrosis (CF) is the most common lethal genetic disorder in Caucasians.

(This material is included here for reinforcement. It is also covered in the Physiol-ogy Lecture Notes.)

Cystic fibrosis (CF) is the most common lethal genetic disorder in Caucasians. Itis due to mutation of the chloride channel protein, cystic fibrosis transmembrane conductance regulator (CFTR), whose CFTR gene is located on chromosome 7 and most commonly has been damaged by a deletion of the amino acid phenylalanine at position 508 ( F508). The defective chloride channel protein leads to abnormally thick viscous mucus, which obstructs the ducts of exocrine organs.

·            In the lungs, CF may cause recurrent pulmonary infections; chronic bronchi-tis; and bronchiectasis.

·            In the pancreas, CF may cause plugging of pancreatic ducts resulting in atro-phy and fibrosis; and pancreatic insufficiency leading to fat malabsorption, malodorous steatorrhea, and deficiency of fat-soluble vitamins.

·            In the male reproductive system, CF may be associated with absence or obstruction of the vas deferens and epididymis, which often leads to male infertility.

·            In the liver, plugging of the biliary canaliculi may result in biliary cirrhosis.

·            In the GI tract, the thick secretions may cause small intestinal obstruction (meconium ileus).

Diagnosis can be established with a sweat test (elevated NaCl) or DNA probes. Due to improved therapies, some patients live into their forties, but with this increase in longevity there has been an increase in liver disease. Patients succumb to pulmonary disease. The 3 most common pulmonary infections are S. aureus, H. influenzae, and P. aeruginosa . Lung transplantation is a treatment option. Patients infected with Burkholderia cepacia complex who undergo transplant have a worse prognosis. 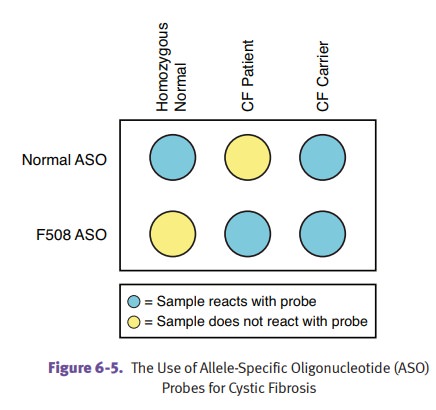 Clinically, affected children are normal at birth but, if undiagnosed and untreated, develop intellectual development disorder by age 6 months. The lack of tyrosine causes light-colored skin and hair, since melanin is a tyrosine derivative. Affected children may have a mousy or musty odor to the sweat and urine (secondary to metabolite [phenylacetate] accumulation).

Screening for PKU is done at birth. Treatment is dietary restriction of phenylalanine, including avoidance of the artificial sweetener aspartame.

A genetic variant, benign hyperphenylalaninemia, has partial enzyme deficiency with mildly increased levels of phenylalanine which are insufficient to cause intel-lectual disability.

In a minority of cases, an abnormality of the cofactor tetrahydrobiopterin causes a variant that does not respond to dietary restriction.

Transplacental accumulation of phenylalanine can cause problems with fetal devel-opment in cases of maternal PKU. Prevention requires maternal dietary restriction.

Clinical features include urine that is initially pale yellow but turns black upon standing, and black-stained cartilage, which causes discoloration of the nose and ears. Alkaptonuria also predisposes for early onset of degenerative arthritis.

Albinism is caused by a lack of the enzyme tyrosinase needed for melanin produc-tion. Affected individuals show deficiency of melanin pigmentation in the skin, hair follicles, and eyes (oculocutaneous albinism), with resulting increased risk of basal cell and squamous cell carcinomas.

The glycogen storage diseases are a group of rare diseases that have in common a deficiency of one of the enzymes necessary for the metabolism of glycogen, which results in the accumulation of glycogen in the liver, heart, and skeletal muscle.

·            Type I (von Gierke disease) is due to a deficiency ofglucose-6-phosphatase, andis characterized clinically by hepatomegaly and hypoglycemia.

·            Type II (Pompe disease) is due to a deficiency oflysosomalα-1,4-glucosidase(acid maltase), and is characterized clinically by hepatomegaly, skeletal musclehypotonia, cardiomegaly, and death from cardiac failure by age 2 years.

·            Type V (McArdle syndrome) is due to a deficiency ofmuscle glycogen phos-phorylase, and is characterized clinically by exercise-induced muscle cramps.

Tay-Sachs disease is due to a deficiency of hexosaminidase A (due to mutation ofHEXA gene on chromosome 15), which leads to the accumulation of GM2 ganglio-side in the lysosomes of the CNS and retina. Tay-Sachs is common in Ashkenazi Jews (1 in 30 carrier rate).

The distribution of disease involves the retina (cherry-red spot due to accentua-tion of the macula) and central nervous system (dilated neurons with cytoplasmic vacuoles). Affected children are normal at birth, but by 6 months show onset of symptoms (progressive mental deterioration and motor incoordination) that prog-ress to death by age 2–3 years. Electron microscopy shows distended lysosomes with whorled membranes; the diagnosis can also be established with enzyme assays and DNA probes.

Niemann-Pick disease is caused by a deficiency of sphingomyelinase, which leadsto the accumulation of sphingomyelin within the lysosomes of the CNS and reticu-loendothelial system (monocytes and macrophages located in reticular connective tissue). Niemann-Pick is common in Ashkenazi Jews (note similarity to Tay-Sachs disease).

In Neimann-Pick types A and B , there is a mutation affecting an enzyme that metabolizes lipids; organomegaly occurs, and with type A, there is severe neuro-logic damage. In type C—the most common form—a defect in cholesterol transport causes ataxia, dysarthria, and learning difficulties. All forms are lethal, usually before adulthood.

Gaucher disease is the most common lysosomal storage disorder. Deficiency ofglucocerebrosidase leads to the accumulation of glucocerebroside, predominately in the lysosomes of the reticuloendothelial system (monocytes and macrophages located in reticular connective tissue).

Type I represents 99% of cases and presents in adulthood with hepatosplenomeg-aly; thrombocytopenia/pancytopenia secondary to hypersplenism; lymphadenopa-thy; and bone marrow involvement that may lead to bone pain, deformities, and ­fractures. Central nervous system manifestations occur in types II and III.

The characteristic Gaucher cells are enlarged macrophages with a fibrillary (tissue paper–like) cytoplasm. Diagnosis can be established with biochemical enzyme assay of glucocerebrosidase activity.

Mucopolysaccharidosis (MPS) is a group of lysosomal storage disorders charac-terized by deficiencies in the lysosomal enzymes required for the degradation of mucopolysaccharides (glycosaminoglycans).

Clinical features include intellectual disability; cloudy cornea; hepatosplenomeg-aly; skeletal deformities and coarse facial features; joint abnormalities; and cardiac lesions. MPS I (Hurler syndrome) is the severe form and is due to deficiency of α-L-iduronidase. MPS II (Hunter syndrome) is a milder form; it shows X-linkedrecessive inheritance and is due to a deficiency of L-iduronate sulfatase.