An assessment of immune function begins with a health history and physical examination.

An assessment of immune function begins with a health history and physical examination. The history should note the patient’s age along with information about past and present conditions and events that may provide clues to the status of the patient’s immune system. Areas to be addressed include nutritional sta-tus; infections and immunizations; allergies; disorder and disease states, such as autoimmune disorders, cancer, and chronic ill-nesses; surgery; medications; and blood transfusions. Physical as-sessment includes palpation of the lymph nodes and examination of the skin, mucous membranes, and respiratory, gastrointes-tinal, genitourinary, cardiovascular, and neurosensory systems (Chart 50-2). 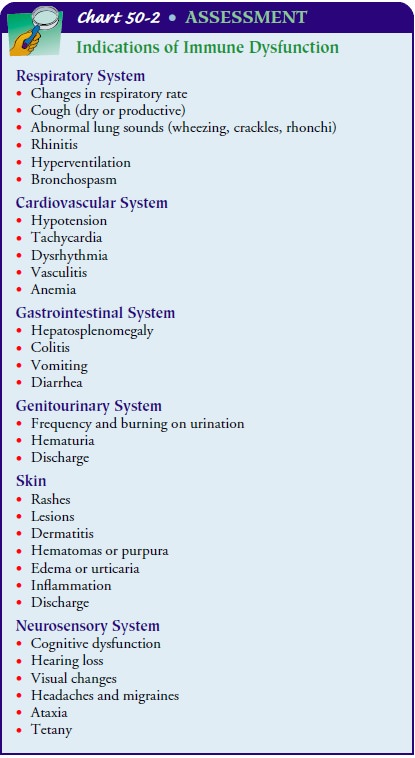 Age is an important factor to elicit from the patient as people at the extremes of the life span are more likely to develop problems related to immune system functioning than are those in their middle years (Table 50-5). 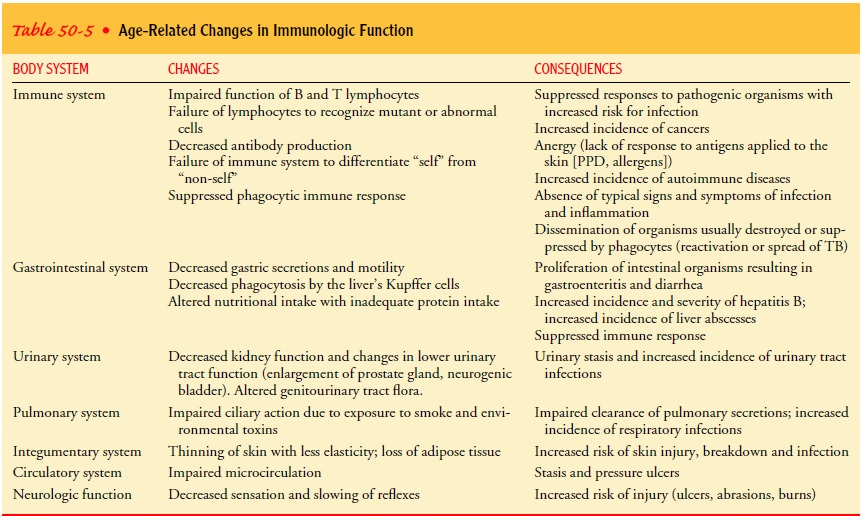 The frequency and severity of infections are increased in elderly people, possibly due to a decreased ability to respond adequately to invading organisms. Both the production and the function of T and B lymphocytes may be impaired. Responses to antigen stimulation may be altered, with increasing proportions of lym-phocytes becoming unresponsive with age (Porth, 2002). The in-cidence of autoimmune diseases also increases with aging, possibly from a decreased ability of antibodies to differentiate between self and nonself. Failure of the surveillance system to recognize mu-tant, or abnormal, cells may be responsible for the high incidence of cancer associated with increasing age.

Finally, with aging, the skin becomes thinner and less elastic. Peripheral neuropathy and the accompanying decreased sensa-tion and circulation may lead to stasis ulcers, pressure ulcers, abrasions, and burns. Impaired skin integrity predisposes the aging person to infection from organisms that are part of normal skin flora.

The nurse assesses the patient’s nutritional status, including caloric intake as well as the type of calories that the patient is consuming. Adequate nutrition is essential for optimal functioning of the im-mune system. Inadequate intake of vitamins that are essential for DNA and protein synthesis may lead to protein-calorie deficiency and subsequently to impaired immune function. Vitamins also help in the regulation of cell proliferation and maturation of im-mune cells. Excess or deficiency of trace elements (ie, copper, iron, manganese, selenium, or zinc) in the diet generally suppresses immune function.

Fatty acids are the building blocks that make up the structural components of cell membranes. Lipids are precursors of vitamins A, D, E, and K as well as cholesterol. Both excess and deficiency of fatty acids have been found to suppress immune function.

Depletion of protein reserves results in atrophy of lymphoid tissues, depression of antibody response, reduction in the num-ber of circulating T cells, and impaired phagocytic function. As a result, susceptibility to infection is greatly increased. During pe-riods of infection and serious illness, nutritional requirements may be exaggerated further, potentially contributing to depletion of protein, fatty acid, vitamin, and trace elements and an even greater risk of impaired immune response and sepsis.

The patient is asked about immunizations (including those re-ceived recently and those received in childhood) and the usual childhood diseases. Known past or present exposure to tubercu-losis is assessed, and the dates and results of any tuberculin tests (purified protein derivative [PPD] or tine test) and chest x-rays are obtained. Recent patient exposure to any infections and the exposure dates are elicited. It is important for the nurse to assess whether the patient has been exposed to any sexually transmitted diseases and bloodborne pathogens such as hepatitis A, B, C, D, and E infections, and HIV infection. A history of sexually trans-mitted diseases, such as gonorrhea, syphilis, HPV infection, and chlamydia, can alert the nurse that the patient may have been ex-posed to HIV infection or hepatitis. A history of past and present  infections and the dates and types of treatments that were used, along with a history of any multiple persistent infections, fevers of unknown origin, lesions or sores, or any type of drainage, are obtained.

The patient is asked about history of any allergies, including types of allergens (pollens, dust, plants, cosmetics, food, med-ications, vaccines), the symptoms experienced, and seasonal vari-ations in occurrence or severity in the symptoms. A history of testing and treatments that the patient has received or is cur-rently receiving for these allergies and the effectiveness of the treatments is obtained. All medication and food allergies are listed on an allergy alert sticker and placed on the front of the patient’s health record or chart to alert others to the possibility of these allergies. Continued assessment for potential allergic reactions in this patient is vital.

The patient is asked about any autoimmune disorders, such as lupus erythematosus, rheumatoid arthritis, or psoriasis. The on-set, severity, remissions and exacerbations, functional limitations, treatments that the patient has received or is currently receiving, and the effectiveness of the treatments are described. Although most autoimmune disorders are individually rare, together they affect approximately 5% of the U.S. population. The occurrence of different autoimmune diseases within a family strongly sug-gests a genetic predisposition to more than one autoimmune dis-ease (Davidson & Diamond, 2001).

In general, autoimmune disorders are more common in fe-males than in males. This is believed to be the result of the ac-tivity of the sex hormones. The ability of sex hormones to modulate immunity has been well established. There is evi-dence that estrogen modulates the activity of T lymphocytes (especially suppressor cells), whereas androgens act to preserve IL-2 production and suppressor cell activity. The effects of sex hormones on B cells are less pronounced. Estrogen activates the autoimmune-associated B-cell population that expresses the CD5 marker (an antigenic marker on the B cell). Estrogen tends to enhance immunity, whereas androgen tends to be immunosuppressive.

A history of cancer in the patient is obtained, along with the type of cancer and date of diagnosis. Dates and results of any cancer screening tests are also obtained.

Immunosuppression contributes to the development of can-cers; however, cancer itself is immunosuppressive. Large tumors can release antigens into the blood, and these antigens combine with circulating antibodies and prevent them from attacking the tumor cells. Furthermore, tumor cells may possess special block-ing factors that coat tumor cells and prevent destruction by killer T lymphocytes. During the early development of tumors, the body may fail to recognize the tumor antigens as foreign and sub-sequently fail to initiate destruction of the malignant cells. Hema-tologic cancers, such as leukemia and lymphoma, are associated with altered production and function of WBCs and lymphocytes.

All treatments that the patient has received or is currently re-ceiving, such as radiation or chemotherapy, are identified and doc-umented in the health history. Radiation destroys lymphocytes and decreases the population of cells required to replace them. The size or extent of the irradiated area determines the extent of im-munosuppression. Whole-body irradiation may leave the patient totally immunosuppressed. Chemotherapy also destroys immune cells and causes immunosuppression.

A family history of cancer is obtained. If there is a family his-tory of cancer, the type of cancer, age of onset, and relationship (maternal or paternal) of the patient to the affected family mem-ber is noted. (See Genetics in Nursing Practice.)

The health assessment includes a history of chronic illnesses, such as diabetes mellitus, renal disease, or chronic obstructive pul-monary disease. The onset and severity of illnesses, as well as treat-ment that the patient is receiving for the illness, are obtained. Chronic illness may contribute to immune system impairments in various ways. Renal failure is associated with a deficiency in circulating lymphocytes. In addition, immune defenses may be al-tered by acidosis and uremic toxins. In diabetes, an increased incidence of infection has been associated with vascular insuffi-ciency, neuropathy, and poor control of serum glucose levels. Re-current respiratory tract infections are associated with chronic obstructive pulmonary disease as a result of altered inspiratory and expiratory function and ineffective airway clearance. Additionally, a history of surgical removal of the spleen, lymph nodes, or thy-mus or a history of organ transplantation is noted because these conditions may place the patient at risk for impaired immune function.

Conditions such as burns and other forms of injury and infection may contribute to altered immune system function. Major burns or other factors cause impaired skin integrity and compromise the body’s first line of defense. Loss of large amounts of serum with burn injuries depletes the body of essential proteins, including immunoglobulins. The physiologic and psychological stressors associated with surgery or injury stimulate cortisol release from the adrenal cortex; increased serum cortisol also contributes to suppression of normal immune responses.

A list of past and present medications is obtained. In large doses, an-tibiotics, corticosteroids, cytotoxic agents, salicylates, nonsteroidal anti-inflammatory drugs (NSAIDs), and anesthetics can cause immune suppression (Table 50-6).

A history of blood transfusions is obtained because previous exposure to foreign antigens through transfusion may be associ-ated with abnormal immune function. Additionally, although the risk of human immunodeficiency virus (HIV) transmission through blood transfusion is extremely low in patients who re-ceived a transfusion after 1985 (the year that testing of blood for HIV was initiated in the United States), a risk still exists.

The patient is also asked about use of herbal agents and over-the-counter medications. Because many of these products have not been subjected to rigorous testing, not all of their effects have been identified. It is important, therefore, to ask patients about their use of these substances and to document their use.

Lifestyle and Other Factors

Like any other body system, the immune system functions de-pend on other body systems. A detailed history of smoking, alco-hol consumption, dietary intake and nutritional status, amount of perceived stress, injection drug use, sexual practices, sexually transmitted diseases, and occupational or residential exposure to radiation or pollutants is obtained. Poor nutritional status, smok-ing, excessive consumption of alcohol, injection drug use, sexu-ally transmitted diseases, and exposure to environmental radiation and pollutants have been associated with impaired immune func-tion and are assessed in the patient history.

The assessment also addresses psychoneuroimmunologic factors. It is thought that the immune response is regulated and modu-lated in part by neuroendocrine influences. Lymphocytes and macrophages have receptors capable of responding to neuro-transmitters and endocrine hormones. Lymphocytes can produce and secrete adrenocorticotropic hormone and endorphin-like compounds. Neurons in the brain, especially in the hypothala-mus, can recognize prostaglandins, interferons, and interleukins as well as histamine and serotonin, which are released during the inflammatory process. Like all other biologic systems functioning in the interest of homeostasis, the immune system is integrated with other psychophysiologic processes and is subject to regula-tion and modulation by the brain.

Conversely, the immune processes can affect neural and en-docrine function, including behavior. Thus, the interaction of the nervous system and immune system appears to be bidirectional. Growing evidence indicates that measurable immune system para-meters can be influenced by biobehavioral strategies involving self-regulation. Examples of these strategies are relaxation and imagery techniques, biofeedback, humor, hypnosis, and conditioning. The assessment should address the patient’s general psychological sta-tus and the patient’s use of these strategies.

On physical examination (see Chart 50-2), the skin and mucous membranes are assessed for lesions, dermatitis, purpura (subcuta-neous bleeding), urticaria, inflammation, or any discharge. Any signs of infection are noted. The patient’s temperature is recorded, and the patient is observed for chills and sweating. The anterior and posterior cervical, axillary, and inguinal lymph nodes are pal-pated for enlargement; if palpable nodes are detected, the location, size, consistency, and reports of tenderness upon palpation are noted. Joints are assessed for tenderness and swelling and for lim-ited range of motion. The patient’s respiratory, cardiovascular, gastrointestinal, genitourinary, and neurosensory status is evaluated for signs and symptoms indicative of immune dysfunction. The patient’s nutritional status, level of stress, and coping ability are also assessed, along with his or her age and any functional lim-itations or disabilities.