However, these definitions have two serious short-comings, they are :

(a) they lack explanation of the behaviour of acids and bases in non-aqueous media, and

1. LOWRY AND BRONSTED’S THEORY OF ACIDS AND BASES

Just after the First World War in 1923, Bronsted and Bjerrum in Denmark and Lowry in Great Britain jointly put forward a more acceptable and satisfactory theory of acids and bases which is devoid of objec-tions earlier raised in Arrhenius’ definition.

The pair of substances which by virtue of their mutual ability either gain or lose a proton is called a conjugate acid-base pair. A few typical examples of such pairs are : 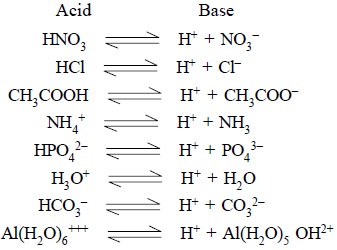 It is quite evident from the above examples that not only molecules but also anions and cations can act as acids and bases.

In an acid-base titration, the acid will not release a proton unless the base capable of accepting it is simultaneously present ; in other words, in a situation where actual acid-base behaviour exists then an interaction should involve two sets of conjugate acid-base pairs, represented as :

Some other examples include :

In short, the species which essentially differ from each other by one proton only, are known as conjugate base and acid respectively. Sometimes, such a reaction is termed as protolytic reaction or protolysis, where A1 and B1 make the first conjugate acid-base pair and A2 and B2 the other pair.

It has two points of merit, which are :

(a)       hydrochloric acid on being dissolved in water undergoes a protolytic reaction, thus :

It may be observed that H3O+, known as hydronium or oxonium ion is invariably formed when an acid is dissolved in water.

Likewise, ammonia on being dissolved in water is also subjected to protolysis, thus :

It does not hold good for nonprotonic solvents, for instance : BF3, POCl3 and SO2.

Thus, Lewis’s definition is a much broader definition that includes coordination compound formation as acid-base reactions, besides Arrhenius and Lowry-Bronsted acids and bases. Examples :

The reaction of borontrifluoride (acid) with ammonia (base) results into a stable octet configuration between mutual sharing of a pair of electrons of latter (donor) and former (acceptor).

The reaction of ammonia (base) with Ag+ (acid) results into a stable configuration due to the mutual sharing of a pair of electrons of latter (donor) and former (acceptor).

Usanovich (1934) modified the Lewis concept of acid and base by removing the restriction of either donation or acceptance of the electron pair in a more generalized fashion. According to him :

Acid : It is a chemical species that reacts with a base thereby giving up cations or accepting anions or electrons.

Base : It is a chemical species that reacts with an acid thereby giving up anions or electrons or combines with cations.

Unlike Arrhenius, Lowry-Bronsted and Lewis acids and bases, the Usanovich’s concept in a much broader sense includes all the oxidizing agents as acids and the reducing agents as bases, e.g.,

The concept of acid-base reactions with respect to the oxide ion was first introduced by Lux (1929) and supported by Flood (1947). According to the Lux-Flood concept—‘an acid is the oxide-ion acceptor while a base is the oxide donor’. Examples :