Compared with antibacterial agents, relatively few antimicrobics are available for treat-ment of fungal infections. Many substances with antifungal activity have proved either to be unstable, to be toxic to humans, or to have undesirable pharmacologic characteristics, such as poor diffusion into tissues. Of the agents in current clinical use, none approaches the degree of selective toxicity thatβ-lactams provide for antibacterial therapy, but the newer azole compounds have significantly higher therapeutic activity and lower toxicity than earlier antifungal agents.

Fortunately, most fungal infections are self-limiting and require no chemotherapy. Su-perficial mycoses are often treated, but topical therapy can be used, thus limiting toxicity to the host. The remaining small group of deep mycoses that are uncontrolled by the host’s immune system require the prolonged use of relatively toxic antifungals. This, combined with the fact that most of the patients have underlying immunosuppression, makes them the most difficult of all infectious diseases to treat successfully. The charac-teristics of currently used antifungal agents are discussed next and summarized in Table 46–1. 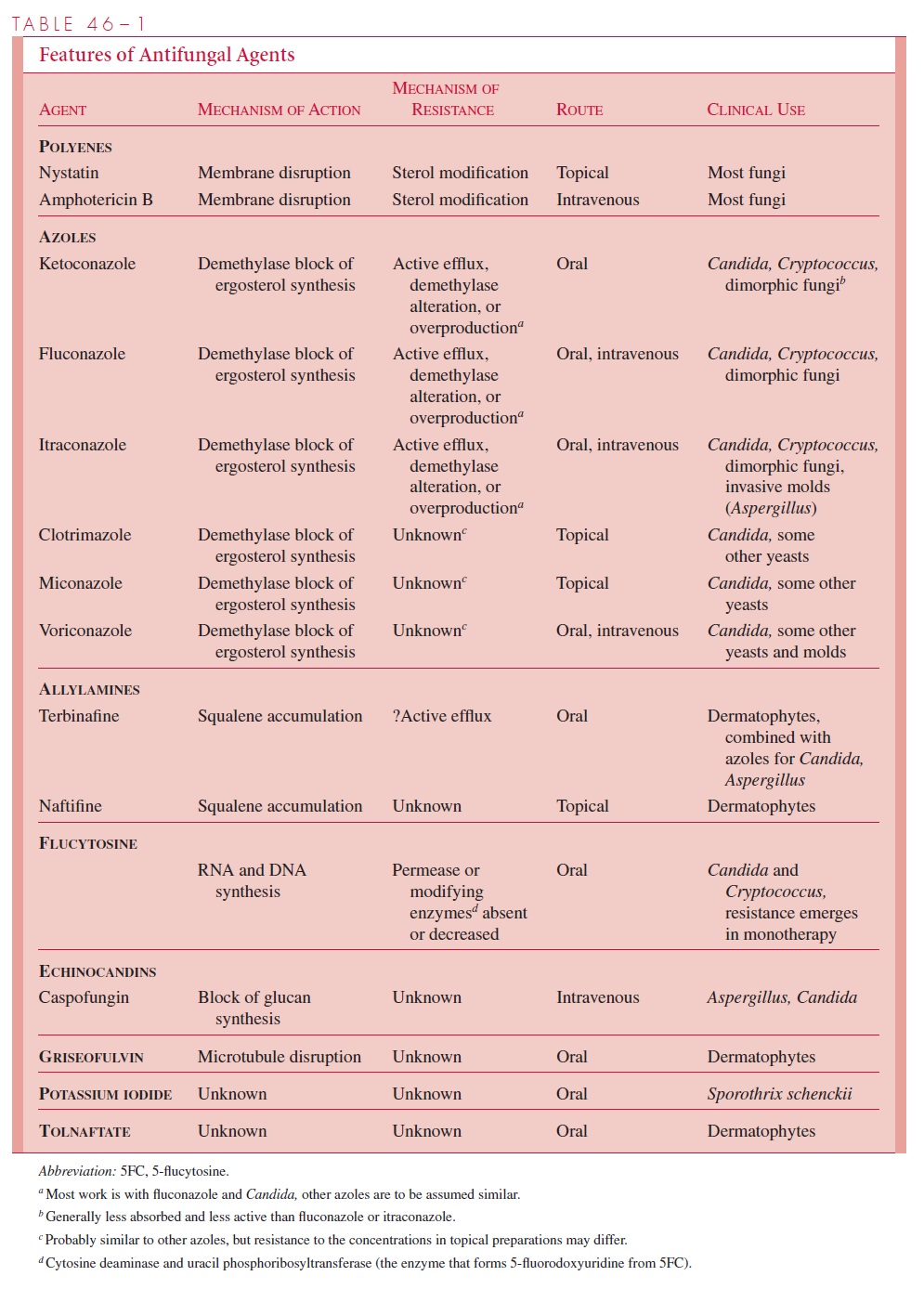 The polyenes nystatin and amphotericin B are lipophilic and bind to sterols in the cytoplasmicmembrane of eukaryotic cells. Following binding, they form annular channels, which penetrate the membrane and lead to leakage of essential small molecules from the cytoplasm and cell death. The basis of their selective toxicity is their greater affinity for the sterols of fungal membranes, such as ergosterol, than the sterols of human cells. This difference is relative, because they also bind cholesterol in mammalian membranes, which creates the considerable toxicity that limits their use.

At physiologic pH, amphotericin B is insoluble in water and must be administered  ntravenously as a colloidal suspension. Amphotericin B is not absorbed from the gastrointestinal tract. Almost all fungi are susceptible to amphotericin B, and the development of resistance is too rare to be a consideration in its use. The major limitation to amphotericin B therapy is the toxicity created by its affinity for mammalian as well as fungal membranes. Infusion is commonly followed by chills, fever, headache, and dyspnea. The most serious toxic effect is renal dysfunction and is seen in virtually every patient receiving a therapeutic course. Experienced clinicians learn to titrate the dosage for each patient to minimize the nephrotoxic effects. For obvious reasons, use of amphotericin B is limited to progressive, life-threatening fungal infections. In these cases, despite its toxicity, it often remains the antifungal agent of choice. Preparations that complex amphotericin B with phospholipids to form liposomes have been used as a way to limit toxicity. The even greater toxicity of nystatin limits its use to topical preparations.

The azoles are a large family of synthetic organic compounds, which includes members with antibacterial, antifungal, and antiparasitic properties. The important antifungal azoles are the imidazole, ketoconazole, and the triazoles, fluconazole and itraconazole. Others are under development or evaluation. Their activity is based on inhibition of a cy-tochrome enzyme (P450 demethylase) responsible for conversion of lanosterol to ergos-terol, the major component of the fungal cytoplasmic membrane. This leads to lanosterol accumulation and the formation of a defective cell membrane with altered permeability characteristics.

Ketoconazole was the first azole to be useful in systemic infections but is now being supplanted by either fluconazole or itraconazole for most systemic mycoses, including as-pergillosis and candidiasis, for which ketoconazole was not effective. Ketoconazole and itraconazole are given orally, and fluconazole, either orally or intravenously. Although nausea, vomiting, and elevation of hepatic enzymes complicate the treatment of some pa-tients, the azoles are much less toxic than amphotericin B. Endocrinologic defects can be a problem because of inhibition of conversion of lanosterol to cholesterol, a precursor of several hormones. Central nervous system penetration of ketoconazole is poor, which limits its effectiveness in systemic coccidioidomycosis and cryptococcosis, but flucona-zole has been more effective. Currently, fluconazole and itraconazole are the primary al-ternates to amphotericin B for treatment of systemic fungal infections. Azoles are also effective for superficial and subcutaneous mycoses in which the initial therapy either fails or is not tolerated by the patient. Two other azoles, clotrimazole and miconazole, are used in over-the-counter topical preparations.

Voriconazole, a second-generation azole, inhibits both 14- -sterol demethylase and24-methylene dihydrolanosterol demethylation, providing a broader spectrum of activity against some yeasts and molds that are resistant to the other azoles. It can be given intra-venously or orally.

The allylamines are a group of synthetic compounds that act by inhibition of an enzyme (squalene epoxidase) in the early stages of ergosterol synthesis. Their lethal effect is due to accumulation of squalene precursors rather than a deficiency of ergosterol. The allylamines include an oral agent, terbinafine, and a topical agent, naftifine. Both are used in the treat- ment of dermatophyte (ringworm) infections.

5-Flucytosine (5FC), which was originally developed as an anticancer drug, is anantimetabolite analog of cytosine. It is a potent inhibitor of RNA, DNA, and ultimately protein synthesis. 5FC enters the cell aided by a permease, where it is converted to 5-fluorouracil by the action of cytosine deaminase. After further modification, 5FC is incor-porated into what becomes defective RNA. Its effect on DNA synthesis is through its conversion to another metabolite (5-fluorodeoxyuridine), which is a potent inhibitor of thymidylate synthetase.

Flucytosine is well absorbed after oral administration. It is active against most clini-cally important yeasts, including C. albicans and C. neoformans, but has little activity against molds or dimorphic fungi. A significant limitation is the development of resis-tance that can occur by single-step mutation during therapy. Potential resistance limits flucytosine use to mild yeast infections or treatment in combination with amphotericin B for life-threatening systemic infections. Use in combination reduces the chance for ex-pression of flucytosine resistance and allows a lower dose of amphotericin B to be used. In some instances, the combination is synergistic. The primary toxic effect of flucytosine is a reversible bone marrow suppression that can lead to neutropenia and thrombocytope-nia. This effect is dose related and can be controlled by drug monitoring.

Given the unique chemical nature of the fungal cell wall, with its interwoven layers of mannan, mannoprotein, glucan, and chitin , it is disappointing that agents that act on any component of the cell wall have not yet made an impact in antifungal chemotherapy. The fungal equivalent of the -lactam and glycopeptide inhibitors of bacte-rial peptidoglycan synthesis would be most welcome. One class of agents (echinocandins), which block glucan synthesis by inhibition of glucan synthetase, cause morphologic dis-tortions and osmotic instability in yeast that are similar to the effect ofβ-lactams on bacte-ria. The first such agent to be licensed is caspofungin, which has good activity against Candida and Aspergillus. Another class of compounds (nikomycins), which disrupt chitinsynthesis, are at an earlier stage of development.

Griseofulvin is a product of a species of the moldPenicillium. It is active only againstthe agents of superficial mycoses. Griseofulvin is actively taken up by susceptible fungi and acts on the microtubules and associated proteins that make up the mitotic spindle. It interferes with cell division and possibly other cell functions associated with micro-tubules. Griseofulvin is absorbed from the gastrointestinal tract after oral administration and concentrates in the keratinized layers of the skin. Clinical effectiveness has been demonstrated for all causes of dermatophyte infection, but the response is slow. Difficult cases may require 6 months of therapy to effect a cure.

Potassium iodide is the oldest known oral chemotherapeutic agent for a fungal infec-tion. It is effective only for cutaneous sporotrichosis. Its activity is somewhat paradoxical, because the mold form of the etiologic agent, Sporothrix schenckii, can grow on medium containing 10% potassium iodide. The pathogenic yeast form of this dimorphic fungus appears to be susceptible to molecular iodine. Tolnaftate is a derivative of naphthiomate. It has activity against dermatophytes  but not against yeasts. It has been effective in topical treatment of dermatophytoses and is available in over-the-counter preparations.

The concepts, definitions, and laboratory methods described for bacterial resistance are generally applicable to fungi. Quantitative susceptibility is measured by the minimal inhibitory concentration (MIC) under conditions that favor the growth of fungi. The diversity of growth rates and metabolic activity in the various fungi has made appli-cation of the MIC to therapy more difficult than in bacteria. The MICs performed in dif-ferent types of fungal growth media can vary as much as 1000-fold. Although which medium is “right” cannot be determined, there has now been agreement on a standardized broth dilution method so experimental and clinical results can be reliably compared. Most of this work is with yeasts; molds are more difficult to work with and not suited to testing in broth. As with bacteria, fungi with MICs in the pharmacologically achievable range may or may not be clinically susceptible. Because of the variables cited above, high MICs do not predict resistance with the same certainty they do with bacteria. For these reasons, antifungal susceptibility testing is still considered investigational and not offered in hospi-tal laboratories.

The cell wall and cytoplasmic membrane present a barrier for antifungal agents to access the fungal interior. While this is generally considered a mechanism of innate resistance, there have been examples in which changes in membrane sterols appear to have restricted perme-ability to azoles. 5FC requires entry of a permease into the cell, and the absence of this en-zyme is a significant mechanism of acquired resistance. Energy-requiring efflux pumps, which remove the drug from the cytoplasm, appear to be an even more important mecha-nism of resistance with the azoles. The efflux mechanism may confer resistance to multiple agents, and the mechanisms and genes involved are similar to the human P-glycoprotein pump associated with resistance to antineoplastic chemotherapeutics.

Alterations in the target of the antifungal agent are an important means of acquired re-sistance. Although resistance to polyenes is rare, it has been traced to the appearance in the cytoplasmic membrane of sterols that have a decreased affinity for these agents. The production of cytochrome demethylases with lower affinity for azoles is also associated with resistance. Other mechanisms of resistance involve the absence or overproduction of crucial enzymes. Isolates resistant to 5FC lack either the permease or the cytosine deami-nase that converts it to its active form. Resistance to both azoles and allylamines has been associated with overproduction of their target enzymes. It is surprising that enzymatic inactivation, the most potent bacterial resistance mechanism, is not important for any of the antifungals in current use.

As with all chemotherapy, the selection of antifungal agents for treatment of superficial, subcutaneous, and systemic mycoses involves balancing probable efficacy against toxic-ity. The factors to be considered are (1) the threat of morbidity or mortality posed by the specific infection, (2) the immune status of the patient, (3) the toxicity of the antifungal, and (4) the probable activity of the antifungal agent against the fungus. In the case of su-perficial mycoses, the risks of appropriate therapy are small, and a number of topical agents may be tried. At the other extreme, an immunocompromised patient will most likely be treated aggressively with systemic agents for proven or even suspected systemic fungal infection. Amphotericin B, despite its toxicity, is still the treatment of choice for almost all serious systemic fungal infections, but the newer azoles are often added. The most common regimen is an initial course of amphotericin B followed by one of the azoles.